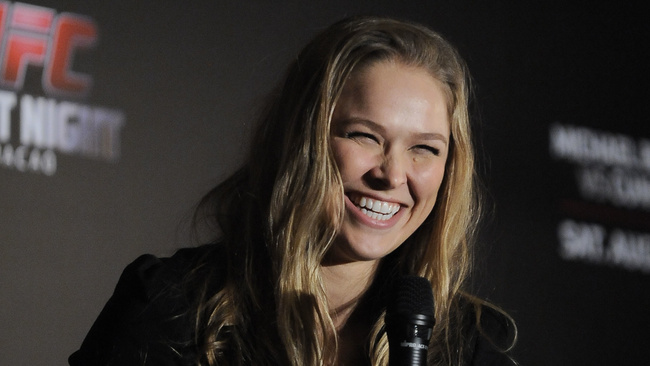 [Ed. note: It’s one of the oldest truisms in boxing  – stolen, they say, from the Spartans: You don’t have sex when you’re training for a fight. Sex will suck the aggression right out of you, meaning it won’t be there when you need it most, like when there's an enormous, angry man standing across from you in the ring trying to take your head off. This is accepted, accumulated, completely anecdotal medical knowledge in the boxing world -- passed down through the ages from men who aren’t doctors to men who aren’t doctors and on to their sons, who also aren’t doctors.

In November, Ronda Rousey, the first UFC women’s champion, flipped the script on that old-wives’ tale by announcing on Jim Rome on Showtime that she tries to have as much sex before a fight as she can, working on the theory that sex raises testosterone levels, and therefore aggression, in women.

In honor of Rousey’s history-making fight with Liz Carmouche this Saturday (and because it’s what we do), we called Dr. Michael Kelly, a sports-medicine specialist, part-time ringside doctor, and the author of the book Fight Medicine, to ask him about the science behind both claims: Does sex make women better fighters? And does the lack of sex make men better fighters?]

"For girls, [sex] raises your testosterone, so I try to have as much sex as possible before I fight actually. Not with, like, everybody. I don't put out, like, a Craigslist ad or anything, but if I got a steady I'm going to be like, 'Yo, fight time's coming up.'" – Ronda Rousey on Jim Rome on Showtime

Dr. Michael Kelly: Rousey is actually right: The more sex you’re having, it tends to raise testosterone levels, both in males and females. The normal ratio of testosterone to estrogen is different between the male and the female, but with women, their levels of testosterone tend to go up more when they get sexually stimulated, and testosterone levels tends to increase aggression. Whether that transfers into a burst in performance for women, we don’t know. We’re talking about really minuscule amounts, so anabolically I don’t think it would have a big effect on the building of muscle or endurance. But we don't know for sure.

But raised testosterone for a female is going to increase their aggression, and it’s going to have an anabolic effect that she may not normally have. It also makes it easier for the female to develop more upper-body strength. The way women are normally wired, it’s easier for them to develop lower-body strength, which is great but it may not necessarily help in a grappling situation or the strength of a punch, etc.

The physiological, evolutionary purpose of creating more testosterone during sex -- the chemical point -- is that it increases desire. And there is a chemical connection between physical desire and aggression. Things get blurred, but it’s all related to testosterone.

Testosterone is a steroid hormone. A hormone is a chemical that can travel through the blood and affect different parts of the body through receptors on the surface of those organs. There are many different types of hormones. Hormones will bind on the surface of cells, certain tissues, and alter the genetic transcription of what’s going on inside the cell. When testosterone binds to the cells of, say, muscle fibers, muscle cells, it will go into the cell, all the way down into the nucleus of the cell, where all the genetic processing takes place. It will increase the activation of certain proteins that will result in building up the muscle. That’s how you get that anabolic effect. The DNA will produce proteins based on what part is activated, and hormones can activate different parts.

As for triggering more nebulous phenomena like aggression and desire, if you think about the different parts of the brain that are linked to aggression or sexual desire, they’re all very low on the brain stem, but it’s the same effect. The hormone will bind on those neurons in the brain, get taken down into the nucleus, affect the DNA to churn out proteins that make more proteins that will eventually stimulate those neurons to be more sensitive to stimuli than they normally would be. And if it’s in the area of the brain that controls aggression, you’ll get a lower threshold for those aggressive impulses to come out. 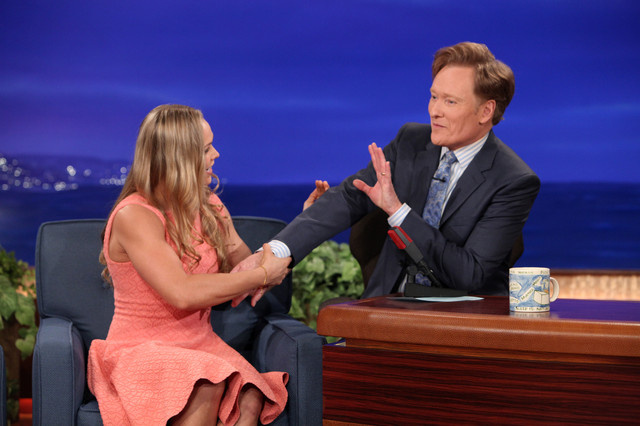 "Maybe we take [testosterone] out of them or something. I don't know the exact science behind it. But maybe that was a pick-up line I heard before. Who knows?" -- Ronda Rousey on Conan.

There are some studies that show testosterone and estrogen can actually be transferred back and forth in the saliva. So when a female is kissing a male, the male’s testosterone can stimulate her testosterone, which would raise her aggression. But there’s no evidence that having sex for a male would decrease testosterone. The ratio for a man during sex won’t change as much as it will for a woman.

So the old boxer’s belief that you shouldn’t have sex before a fight isn’t based in science. It’s a myth about male fighters because it’s not as if there’s only a certain amount of desire that can be triggered before you run out. You can’t deplete your testosterone levels by having sex. It’s actually the opposite: The more sex you have, you tend to stimulate testosterone production. But maybe there’s a psychological boost. Men grow more irritable when they don’t have sex, which is probably a good trait when you’re in the ring with somebody. So maybe there’s less of a physical effect and more of a psychological effect.

I don’t know whether the same kind or level of hormone transfer would happen with a same-sex couple. I would assume there would be a difference with, say, two women just because they have different ratios of testosterone and estrogen in their bodies. Every cell, everything the body makes, has an imprint on it, a genetic fingerprint, and it may be that somehow the body senses that it’s somebody else’s testosterone in the saliva that’s stimulating theirs, but they don’t know if it’s male or female.