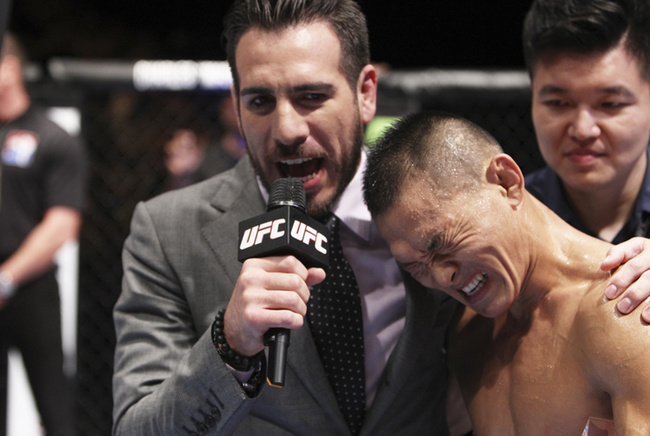 UFC Fight Night 48 in Macao was a huge leap forward for MMA in Asia, despite a couple stinkers and some questionable decisions. It also delivered in some other ways; dispelling a few rumors and moving the whole UFC fight train forward with new match-ups and some new possibilities.

The house was packed—7,022 people—and the Venetian spent weeks putting together small PR events and billboards, LED displays and inviting groups of influential people from Hong Kong and Macao to attend the show. The crowd was at climax for a small period of time, but then one serious dud of a fight, right in the middle of the card, took the wind out of everyone’s sails and it took a great TKO from Woodely and Cung Le taking a beating like a soldier to get the crowd into it again. Bad fights happen, but so do good ones and this card had both.

Ronda Rousey made a stir; Michael Bisping got the win he so desperately needed, and a string of debuts changed some fighters’ lives—Alberto Mina, Wang Sai and Yuta Sasaki had especially great performances.

Let’s start with the top and work down. 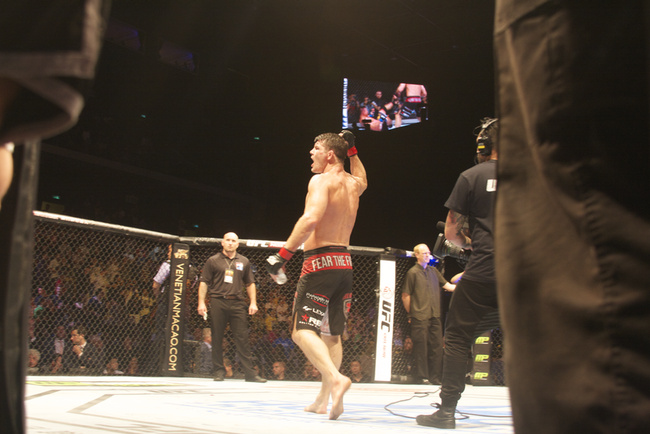 The Cung Le vs. Michael Bisping fight went the way everyone should have expected it to go, had Shredgate and a few flat performances from Bisping not clouded all of our collective vision. Even so, the fight looked pretty even until the punch that opened up Le’s left eye. Le had been landing some hard shots to the body and threatening with high kicks and overhand rights, while Bisping danced around and peppered Le from afar. But once that punch to the eye started Le’s blood flowing, it got nasty. Le thought it was a poke, the ref didn’t, Bisping took advantage and started to take the fight over.

Just before the bell rang for the 4th round, I saw Le look up at his own face on the screen and it seemed as if his spirit just sunk a bit. He looked down at the mat, took a breath, and waded out into a flurry of combinations and a coup de grace via left knee to the face with the heart of a lion.

For Bisping, this must have been one of the most gratifying fights of his life, if not his most important. He looked great and had a bit of fun. While the doctor was checking Le’s eye in the second round, Bisping leaned on the cage and traded how-do-you-dos with Ronda Rousey, who was sitting ringside.

After the TKO stoppage, Bisping jumped right back on the fence and called out Luke Rockhold.

Say whatever you want about the man’s trash talking and bravado, he looked perfect out there and got the job done. He’s “not going nowhere” and just like that, Michael Bisping is a contender again. He also took home 50 grand in bonus money.

I remember a few things about this fight. The bass from Woodley’s walkout song; how the two men just walked out at the sound of the bell and went at it right away—a very welcomed sight after two slightly boring fights. It was a shock to see Kim getting hammer-fisted and stopped in just over a minute in. I realized that Woodley nailed Kim in the back of the head as Kim tried a wild spinning elbow (not this time!), and heard Tyrone holler over at Kim, who was hanging his head with his cornermen, and passed the mic so Kim could address his adoring fans in Macao. 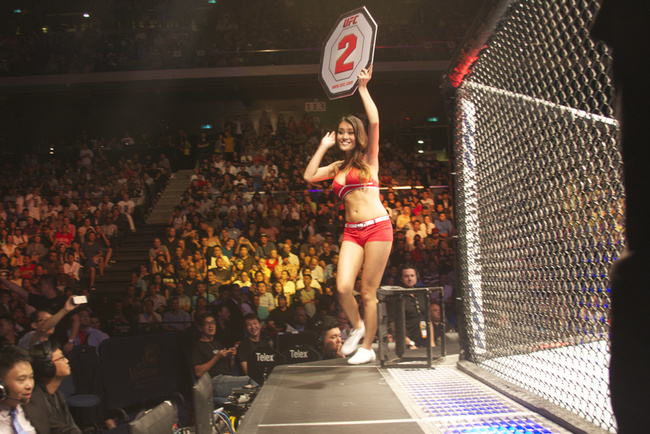 Zhang Lipeng is a great fighter with potential to make some waves, and he definitely handled business tonight. He beat O’Reilly on the feet, on the ground, held his back, and beat him up every chance he could get. Poor O’Reilly had to listen to a pack of Aussie lunatics scream out “Oi Oi Oi” and “ANZAC!” for the entire fight, while bleeding all over the place and getting tagged with impunity. Bad night for the young TUF: Nations fighter.

This was the fight that colored the entire card. The two bounced around for three rounds, although Guangyou somehow ended up with a massive egg on his head. There was very little action, lots of furious grunting, and echoing boos all fight long. The fans screamed for two rounds, and then, resigned to the fact that no one was going to actually fight, everyone just sat there with glazed eyes and tweeted jokes about how shitty the fight was.

This one was truly hard for me to watch, because I know about the bad blood between the two, how critically important this fight was for both men and their futures, and how disappointing it was for Guangyou to get booed en route to a lackluster victory. But hey, he has the contract, he’s the TUF: China featherweight champ, and maybe next fight he’ll have a chance to land a few blows.

This fight should not represent China MMA, though.

Fucking great fight, this one. Really, really unfortunate that this was on the prelims and didn’t get the airtime it could have. Good thing is, the people who matter to both fighters’ futures saw the fight, so we’ll see these guys again. Mitchell came out to Elvis’ song, “Guitar Man”, swinging a hillbilly mullet. Wang Sai had the balls to come out to Duran Duran’s “Wild Boys”. Irrelevant?

Wang Sai is the big brother of the Chinese MMA fighters. He’s not the most technical, doesn’t even have the most potential, but he’s the toughest of them all. Mitchell, a BJJ black belt, tried to take Wang Sai down and submit him several times. No dice. Wang Sai got out, reversed and mounted, and immediately started pounding away. Fuck it, said Mitchell, and the two banged on their feet for most of the second and third rounds. The crowd was probably at its most hyped at this point, because the fight before this one was also a brawl and ended in a brutal stoppage. 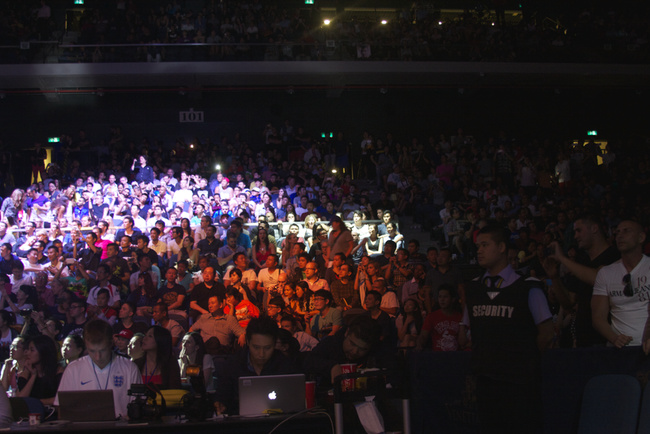 The Macao crowd really got up for Alberto, who trains out of local gym, Epic MMA. Epic had a big crew in full effect, and they got everyone else yelling and screaming too.

Anzai took the fight on short notice, stepped in, and brawled. The two traded heavy shots until they both just stood there, punch drunk and gassed, hurling haymakers at each other while the crowd drooled and screamed. Alberto was the man to land the uppercuts that won it, and he sealed it with way too many hammer-fists. Not sure what referee saw that we didn’t, but he eventually did jump in and stopped it. Looked like almost a dozen blows though, and Dana White mentioned the slow stoppage in the post fight press conference.

For Alberto, it was a great debut, and a big win for Hong Kong’s MMA community.

Japanese fighter Yuta Sasaki rolled into his fight with Roland Gelorme with a puffy red perm. I chuckled for like one second until I saw him move. And stick. And move and kick and move and BAM! rear naked choke at 1:06. Incredible debut.

Gelorme supposedly remarked after the fight that he “felt like someone who had lost his job.” These guys here on the Macao card have one foot in the door, and the other outside in the cold. When Sasaki locked in the choke, a hand reached out and pulled him into The House That Dana Built, and Gelorme is right now standing out there wondering how it all came to this. All the hours. All the pain. All his friends and family, all the Facebook posts and tweets. All shattered in under a minute. Maybe he’ll get another shot, but then again maybe not.

Poor Wang Anying. He’s unknown even in the Chinese MMA circle, and he was dominated by a much better fighter in Colby Covington. It was an uneven beat down, stopped just before the end of Round 1. Colby left to fans calling his name, grabbing selfies, getting autographs. Wang Anying—Smiley is his nickname I guess—just left.

Now for the controversy… 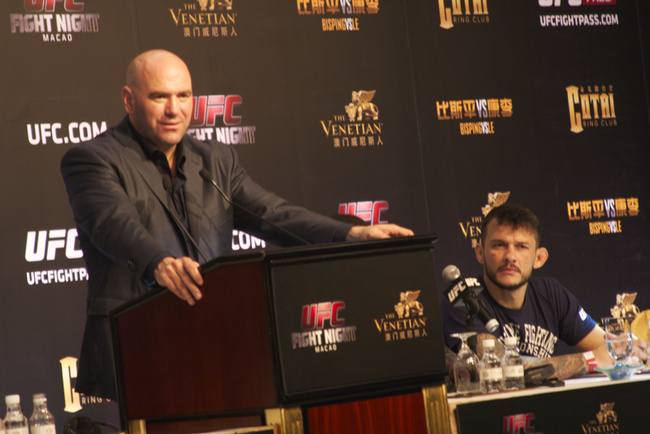 The Royston Wee - Yao Zhikui fight lost a judge his job, or as Dana White put it: I told him to go get a beer and some popcorn and go watch some fights.

Yao Zhikui tagged Wee throughout the fight, was never in trouble, and seemed very confident on his feet. But he was also taken down and held there by Wee for much of Rounds 1 and 3. Wee also took Yao’s back and stayed there for minutes at a time, a classic “control vs. damage” type of fight that must be incredibly hard to judge. It wasn’t this fight alone that lost this judge his job.

This bout opened the card and also had some bad judging. Dudieva looked like a jacked she-hobbit out there, shuffling after Phillips as she danced and circled. The Russian’s overhand rights have KO power, but she didn’t land that many, and Phillips survived the ones that did land.

Phillips spent her time sticking and moving, and reversing Dudieva’s takedowns into top control and a bit of ground and pound. She was devastated when the judges awarded Dudieva the decision, and she and her coach wouldn’t leave the ring for a bit. Phillips eventually left, close to tears, and then ended up going off on Facebook about the UFC, shitty judges, and the “piece of crap Russian” she beat up all night. Yikes.