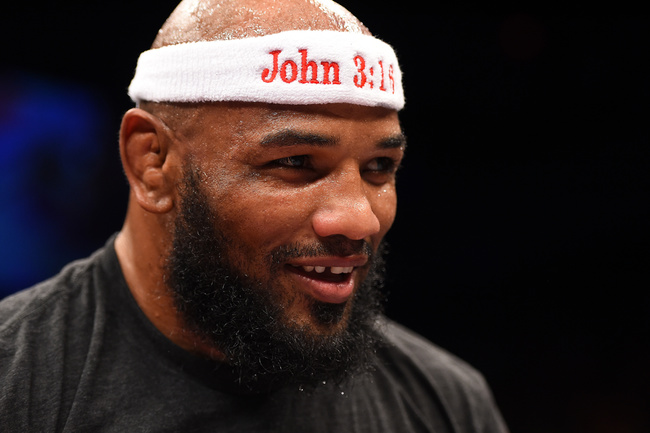 From the get-go, Hollywood, Florida’s UFC Fight Night 70 was a bit of a strange card. Originally scheduled as the finale for the latest season of The Ultimate Fighter: Brazil, the line-up was given a last minute facelift as visa issues forced several fights off the card, and several short-notice bouts to be added.

All the same, the Yoel Romero and Lyoto Machida helmed event delivered as an enjoyable one. The second card in a row that featured no fights heavier than the middleweight division, the event also featured action at welterweight, featherweight, and bantamweight. And though the card lacked any big name value outside of its main event, it made up for that deficit with all the knockouts, submissions and surprises one expects of a good night of fights.

Here’s a recap of the action for those who missed it! 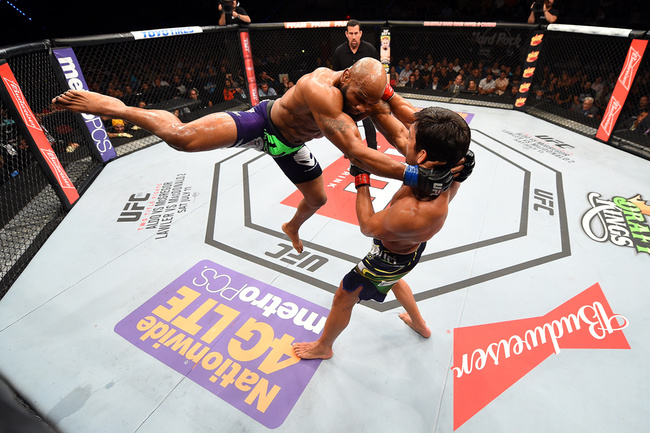 The evening’s main event paired middleweight contenders Lyoto Machida and Yoel Romero—one a former UFC champion, one a former Olympian—in a bout that neither man could afford to lose. Of course, in the fight game, somebody almost always has to lose, and tonight, that man was Machida.

Round one of this classic, clash of styles saw the two fighters feel each other out in a tense and technical display. Round two saw Romero begin to find his range, and mix things up with a flying knee and an off-the-cage punch, while Machida landed some nice shots of his own. Round three finally saw Romero turn to his Olympic-level wrestling, and that is where the tide turned—abruptly. After landing a knee-tap takedown that sent Machida swirling to the ground, Romero rained down elbows until the former champion was napping on the canvas. It was a truly impressive display.

In victory, the Cuban powerhouse moves into the double-digit wins with a strong 10-1 record. More importantly, he rockets into the middleweight top 5, where a number-one-contender bout with Ronaldo “Jacare” Souza now makes more sense than ever. And though we’ll all be scratching our heads for weeks over his bizarre post-fight speech, his performance won’t soon be forgotten.

Machida, on the other hand, falls onto the second two-fight losing streak of his long an illustrious career. He now sits at 22-7 overall, and though he is undoubtedly a candidate for a spot in the UFC Hall of Fame, his championship days indeed appear to be over. 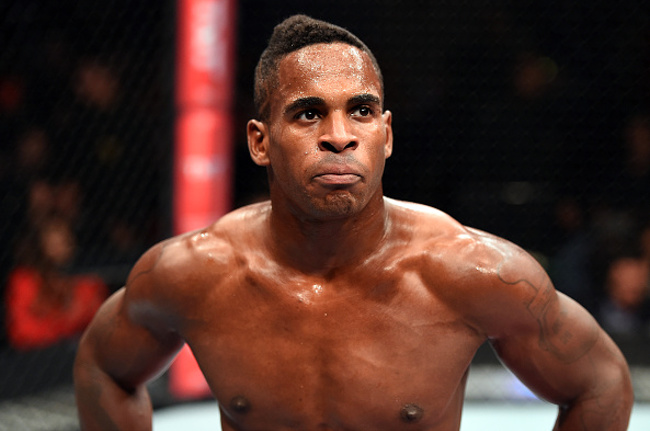 The evening’s co-main event paired dynamic welterweights Santiago Ponzinibbio and Lorenz Larkin, who owned a collective 20 knockouts leading into the bout, in a fight that had “barn-burner” written all over it. While it lasted, it was certainly just that.

For two and a half rounds, Larkin’s fluid and fearsome technique collided with Ponzinibbio’s relentless pressure until finally, Larkin landed the shot that mattered most, sending his opponent crashing to the canvas. From there, he sealed the deal with punches against the cage.

In victory, Larkin continues his climb up the welterweight ladder. Now sitting at 16-4 overall, and 2-0 in his new division he is quickly emerging as real contender—and who could forget that he holds a 2012 win over reigning 170-pound king, Robbie Lawler?

Ponzinibbio, on the other hand, has a two-fight streak snapped by the loss. Now 19-3 overall, it’s just his second knockout defeat, and third overall. 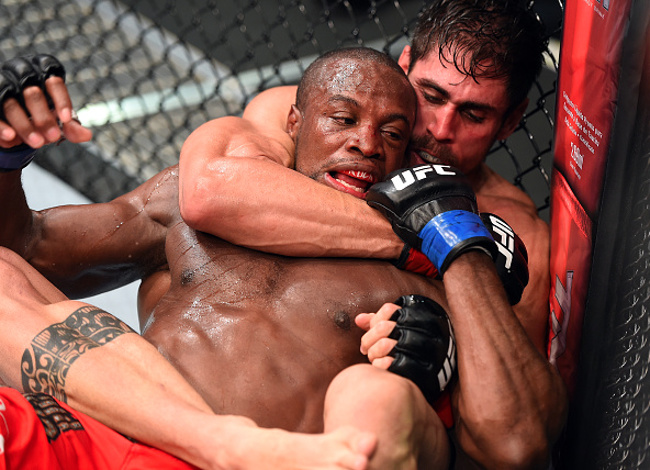 To this end, it was “Cara de Sapato” who found success, and he did so in emphatically. In a dominant performance that saw him land 53 significant strikes and 4 of 4 attempted takedowns, the TUF Brazil winner outclassed his opponent everywhere, culminating in a late third-round rear naked choke—the first and only submission of the night.

The victorious Brazilian now sits at 5-1 overall, 1-1 in the UFC, and 1-0 as a middleweight. At Just 25 years old, the sky appears to be his limit. Gordon, on the other hand, slips to a tough 7-4 overall, and worse, onto a 3-fight losing streak. If he’s given another chance with the UFC, he’ll need to win it. 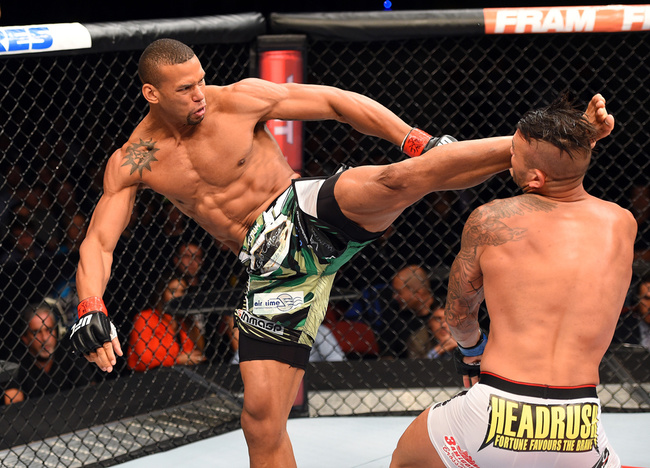 Both middleweights entered the octagon to make a statement: Santos looked to achieve his first two-fight win streak since 2012, while Bossé looked to make good on his UFC debut—which happens to be his first fight since May of 2013. Unfortunately for the former hockey goon, his MMA return did not go well.

Less than 30 seconds into the first round, Maretta shut the lights off on the French Canadian with a blistering high kick—somewhat reminiscent of Rashad Evans’s 2007 knockout of Sean Salmon, which also occurred in Hollywood, Florida. The spectacular knockout, which is the third first-round knockout of his UFC career, moves Maretta to a solid 11-3 overall. Bossé, in contrast, slips to 10-2, and will have to wait for his first UFC win—or return to hockey. 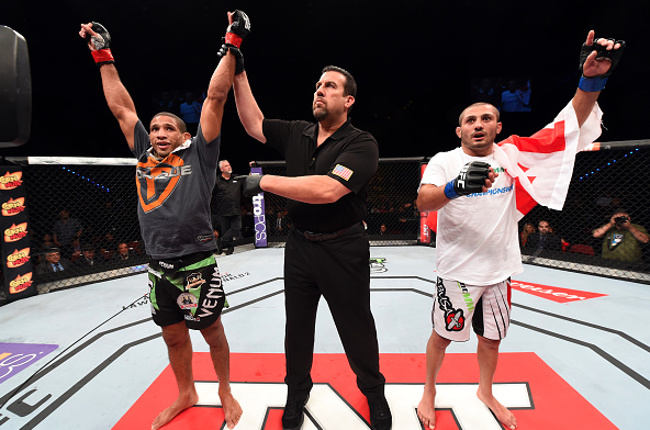 The lone featherweight bout of the night paired Brazil’s Hacran Dias with Levan Makashvili, who replaced Chas Skelly on short notice. In this one, Dias looked to maintain his spot amongst the division’s top-15, while Makashvili looked to steal it. After three relatively unexciting rounds, it was Dias who came out on top. Relying on relentless, but largely unsuccessful takedown attempts, the Brazilian fought his way to a close, split decision win.

In victory, he moves to a strong 23-3, and maintains his spot amongst the featherweight elite. Makashvili, on the hand, experiences his first UFC loss after winning his debut in March. He now sits at 7-2 overall.

Donald Cerrone isn’t the only “Cowboy” in the UFC with a busy fight schedule. Brazil’s Alex Oliveira, who competes under the same nickname, is also a frequent competitor. In Florida, he looked for a win in his third UFC appearance of the year. He did so against former University of Louisiana-Monroe wide receiver and promotional newcomer Joe Merritt, who looked to keep an unblemished 6-0 record intact.

Despite plenty of submission attempts from Oliveira and meaningful strikes from both, this one eventually reached the judge’s scorecards. When it did, it was the Brazilian who was given a reason to celebrate.

The unanimous decision victory thrusts “Cowboy” to a solid 12-2 overall—making him the third fighter of the night to achieve to that record in victory. The durable Merritt on the other hand, loses for the first time. That said, the athletic 31-year-old seems to be full of potential. Look for him to make a splash with a full training camp behind him.

Bout three of the UFC’s return to The Sunshine State paired two exciting lightweights-turned-welterweights. In one corner was Leandro Silva, who looked to rebound from a bizarre March no-contest with Drew Dober. In the other was the debuting Lewis Gonzales, who entered the Octagon after three fights in WSOF.

After three, close rounds it was Silva who came out on top. With sharper striking, success in the scrambles, and markedly better conditioning, the Brazilian fought his way to a well-earned decision win.

The win moves Silva to an awesome 18-2, while his opponent loses for just the second time and falls to 10-2.

Prior to Fight Night Florida, UFC debutants Steve Montgomery and Tony Sims had both lost twice. In Hollywood, they both looked to avoid a third loss. At just 2:43 of round one, it was the much smaller Sims who was successful in this regard. With a bullet of a left hand, the Denver-native put his opponent down for good.

In victory, Sims now sits at 12-2 and will likely return to the lightweight division in his next bout. Montgomery, in contrast, slips to 8-3.

After losing his first two bouts in the organization—to Scott Jorgensen and Chris Cariaso, both of whom have contended for titles in Zuffa-owned leagues—Danny Martinez was on the hunt for his first UFC win in Florida. Unfortunately, his opponent had other plans.

After three rounds of action, the Swedish bantamweight Sirwan Kakai proved too much for his American opponent, earning a unanimous decision with an assault of punches, knees, and well-time takedowns. In victory, he moves to 12-2, and makes a successful UFC debut. Martinez, on the other hand, falls to 16-7 and remains winless in the sport’s premier organization.