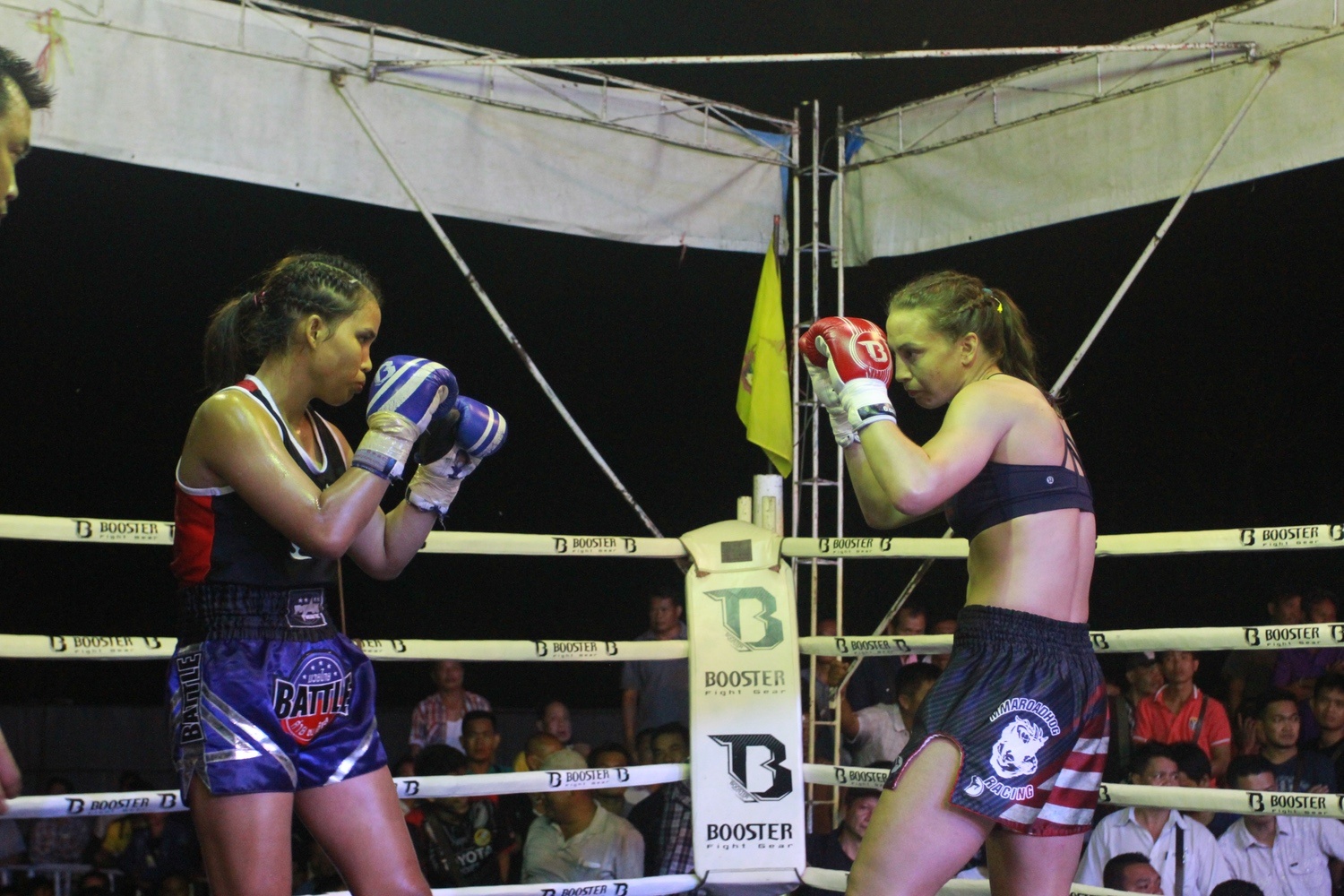 The rain poured down on the recently set up traveling fight ring. It had been set up in a school soccer pitch as there was no roof. It was late afternoon and the fights were set to begin around 8pm. No one cared, and nothing was done. Instead, the rain saturated the canvas and foam mats below. Months of vaseline, Thai boxing liniment, blood, sweat, and dirt mixed together to create a thin film of grime on top of the Booster Fight Gear canvas.

In Isaan, problems like these occur on a regular basis. But instead of preventing these problems or fixing them, they just fight on.

We didn't show up until 9:30pm, by that time the fights were well underway. When you show up with a golden era champion like Rotnarong, you can't just show up on time; you must make an entrance. We arrived six people in total. Fighters are usually only allowed to come in with two corners, and despite what some may view as a casual set up, these restrictions are strictly enforced in Isaan. But with Rotnarong, we all walked in; it was a total groupie moment. Fighters were sliding back and forth across the canvas, falling down at least three times per round. At one point the referee went to break the clinch and pulled one of the fighters off a little too hard, sending him sliding across the ring. It was as if it was a novelty show, and they had replaced the canvas with a slip n' slide. Those yellow ones that your friends always had but your parents refused to buy you.

But despite the comical aspect of tonight's fights, these were real fights. Four titles were on the line: two Muay Siam Isaan titles and two WMO world titles. And the gamblers were there to work.

The event was co-promoted by local Isaan promoter Bualuang and Krongpetch, who moved to America from Thailand to teach, train, and fight. Krongpetch, originally from Kalasin province, hadn't been back home to Thailand in 6 years and this was his first visit in all those years. It was probably midnight before Rotnarong was called up to fight. His team didn't have much confidence in him, most likely because he hadn't trained a single day for this fight and was giving up over 50 kilograms in weight. Rotnarong had planned to drop out weeks ago. His rationale being that not only did his opponent outweigh him by 65% of his own body weight, but he was also 15 years younger. A Rajadamnern champion from the golden age, Rotnarong is 45 years young and still fighting.

He called me the day of the fight; he was sick. Really sick. He told me that he was now fighting and to get everything ready and that he'd be at the gym later that afternoon for his pre-fight massage. When I asked why the sudden change of heart, he told me that he had just lost a huge bet on Channel 7 when a fighter was able to knockout his opponent in the fifth round after being a 20-1 underdog.

It was around 4 and Rotnarong was the next fight. Instead of gloving up he was chatting gleefully with his friends. When I told him to hurry up, lace up, and put on his cup. He smiled and said,

"I'm Rotnarong. They can wait for me." The crowed roared when he entered the ring. Fighting Thailand's elite for over 10 years in the stadia of Bangkok, he was a true legend of the sport. Never once, in 500 fights, has he lost by

KO or TKO, never once threw a fight for gambling...this was Rotnarong. Nicknamed both king of the face teep, and saa— loosely translated as eternal effervesce, it was a joy for everyone there to get to see him perform.

He walked right up to Graburlek (the little buffalo) with his hands down and went for it but the slip n' slide fight canvas got him and got him good. Rotnarong fell three times in the first round alone, whereas the little buffalo, terrified to fall on his fat ass, spent the entire fight leaning up against the ropes. The fight was even up until mid-way through the third when Rotnarong just gassed. He didn't give up though; walking forward taking shots with a huge smile on his face. And despite being exhausted, he went for the knock out after being offered a 50,000 Baht (1,400 USD) tip to turn the fight around. There were moments in the fight where we thought the little buffalo, rumoured to have glass chin, was going to go down. But it was too little, too late. Rotnarong ended the fight with not one but two of his signature cartwheel kicks that he made famous over twenty years ago. Despite losing, he was the crowd favourite of the night. One of the most anticipated fights of the night was former MMA fighter and Invicta matchmaker Kaitlin Young defending her 63.5kg WMO World title against Faaseethong Sit. Sawung. They weighed in the morning of the fight, but Kaitlin was required to weigh in .5 less than her opponent. The reason, gambling. For those that knew Kaitlin, she was heavily favoured to win. Her trainer collected a 400,000 Baht (11,500 USD) side bet, but Faaseethong's team was only able to match 100,000 Baht (2,900 USD). Faaseethong however is no push over. She has, on multiple occasions fought men. And not for show, her last male vs. female bout included an 80,000 side bet that she won and she's just recently won a K-1 rules tournament in Japan for big prize money.

It was apparent from the first round that Kaitlin was the physically stronger fighter, but the gamblers weren't as sure of her and the odds stayed in Faaseethong's favour despite Kaitlin's best efforts. Kaitlin really struggled to let go, most likely a combination of the slip n' slide fight ring and Faaseethong's evasive style. Gamblers crowded Kaitlin's corner, standing on the metal crowd dividers as if it was a tight rope. They were all screaming in Thai, but Kaitlin only speaks English. At the end of five rounds, Faaseethong was declared the winner by unanimous decision, capturing the 63.5kg WMO World championship. She also took home the 100,000 Baht side bet in addition to some big tip outs from the gamblers who were betting on the outside. A productive, rain soaked night for the new champion.