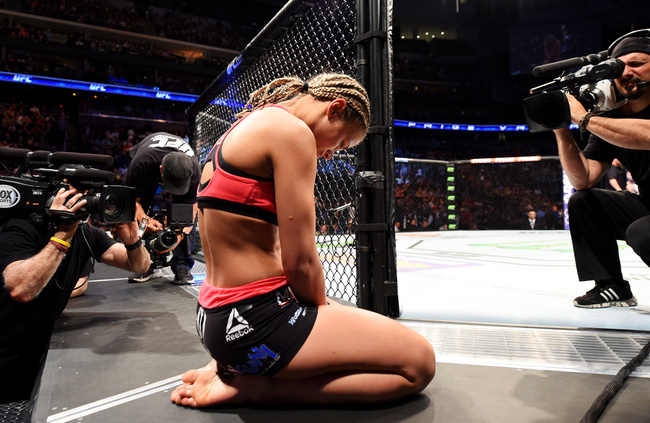 UFC on Fox 15, which went down in Newark, New Jersey, sticks out as one of the most exciting cards in recent memory. And while it was highlighted by the impressive performances by Luke Rockhold and Ronaldo “Jacare” Souza, perhaps the most memorable storyline of the event was the emergence of several seriously intriguing prospects—each at the expense of a veteran competitor.

Complete with dominant decisions, big knockouts, and a slew of slick subs, it was a card we won’t soon forget. Here’s a recap of the action for those who missed it! 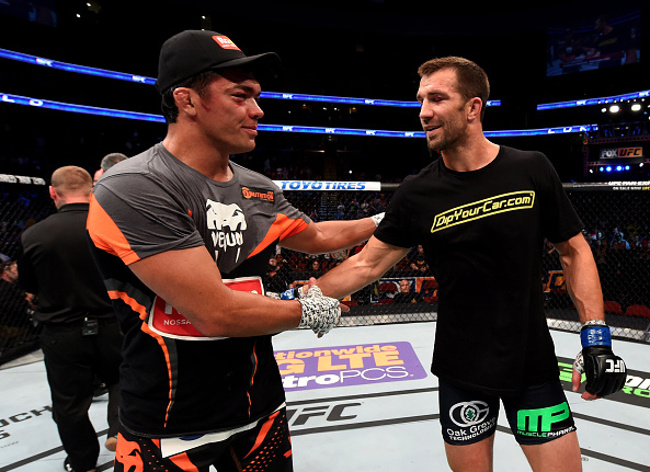 In advance of UFC on Fox 15, many referred to the card’s main event as a true coin flip, a pick ‘em fight with no clear winner. In the end, however, the bout was all Luke Rockhold’s.

Though Lyoto Machida landed a few solid punches to begin the bout, the moment the fight hit the mat, Rockhold took control. With an assault of smothering top-game, hellacious ground and pound, and submission attempts, the AKA stalwart very nearly ended things in the first round. In round two, he didn’t waste a minute, locking up a rear-naked choke, and earning arguably the biggest win of his career to the roar of thousands of fans in Newark.

In victory, Rockhold now enjoys a 14-2 record, and stands out as one of the clear-cut contenders for the winner of Chris Weidman and Vitor Belfort’s upcoming title fight. At this stage, it’s just a question of who gets picked first: him or Ronaldo “Jacare” Souza.

Machida, on the hand, has been stopped for just the third time in his storied career. In defeat, he falls to 22-6, and while he remains a dangerous test for any fighter from middleweight to light heavyweight, he may not have another chance to contend for a UFC title. 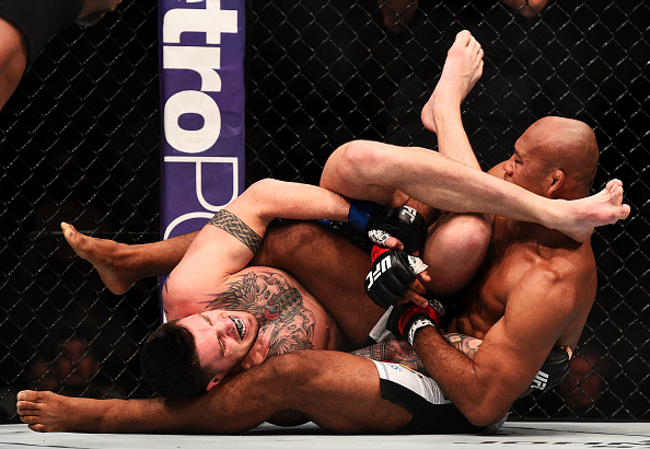 Any other result would have been seriously surprising.

Two years after their first meeting, which was also the result of a last-minute injury, Jacare once again submitted Chris Camozzi in the first round. This time, it was an armbar that ended the fight.

Watching Jacare do his thing is always fun, yet his doing the exact same thing so recently does take some of the gleam away from the performance. And at the end of this day, this last minute, best-of-a-bad-situation bout was really just about giving the BJJ legend the opportunity to keep his momentum going and receive his paycheck. In victory, he remains the division’s number one ranked middleweight, and extends his unbeaten streak to eight. His overall MMA record now sits at an impressive 22-3.

Camozzi, on the other hand, falls to 21-10, but has reaffirmed his ownership of some of MMA’s most sizable cojones. And though he came up short in this last minute showdown with his former foil, his willingness to step up has earned him another UFC contract—so it’s not all bad news for the Californian. 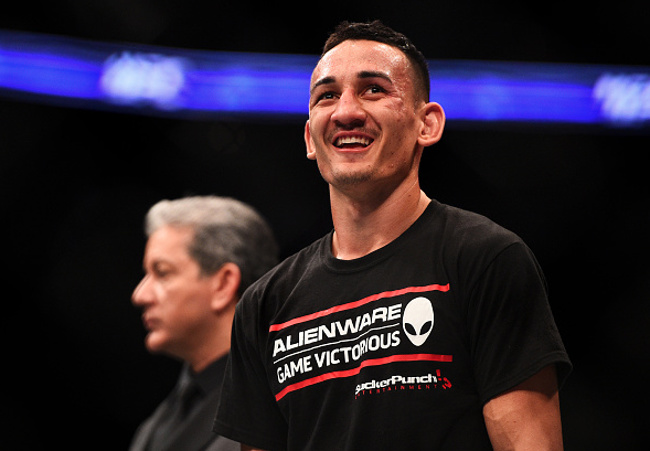 People have been talking about Max Holloway’s potential for years. In Newark, that potential was on full display. After two rounds of dominance, the 23-year-old locked up a slick, third round guillotine on long time top-10 fighter, Cub Swanson. The tap came moments thereafter.

In victory, Holloway extends his win-streak to 6, the third-best in the division behind Jose Aldo and Conor McGregor. More importantly, he will now careen into the featherweight top-10, where bouts with monsters like Chad Mendes, Frankie Edgar, McGregor and Aldo certainly lie in his future. Whether he can hang with such high-calibre opponents remains to be seen, but one thing is certain: after 12 fights inside the UFC, Max Holloway is undoubtedly hitting his stride. That should worry every featherweight on the roster.

Swanson, on the other hand, slips onto a 2-fight losing streak—a far cry from the 6-fight win streak he enjoyed from 2012-2014. And though his exciting style and long-time relevance mean he’ll remain a staple of the featherweight elite, the 31 year old has taken a serious step back. He’ll need to put on some seriously impressive performances to outrun the memories of his two most recent losses. 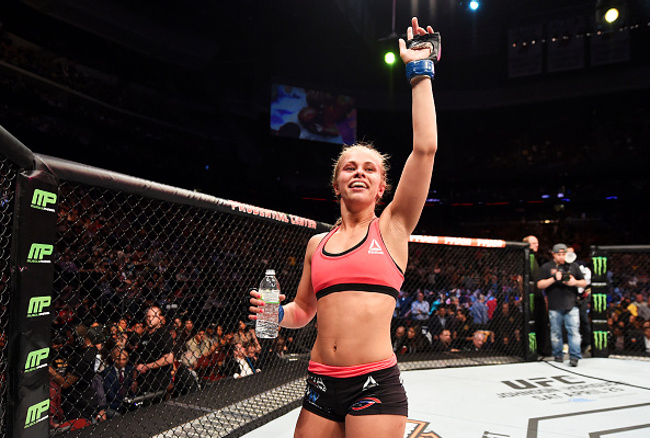 It wasn’t the most technical display, but man, it was fun to watch. For three, dominant rounds, the hyped 21-year-old Paige VanZant threw everything—including the kitchen sink—at her vastly more experienced opponent, Felice Herrig. The victory will only add more gasoline to the bonfire that is the young scrapper’s hype.

In victory, VanZant moves to an impressive 5-1, and is likely to get a big-name opponent in her next bout. Who that opponent will be remains to be seen, though a bout with the winner of Rose Namajunas and Nina Ansaroff might make sense.

Herrig, on the other hand, falls to 10-6 in defeat and will have to do some serious work to erase the memory of this Newark, New Jersey beating. That said, she’s likely to remain a fixture of the UFC’s spectacular strawweight division and has many exciting choices ahead of her. A bout with Scotland’s Joanne Calderwood could be next.

Just weeks after out-striking a striker in Daron Cruickshank, Beneil Dariush out-grappled a grappler in Jim Miller. In doing so, he reaffirmed his emergence as one of the most exciting prospects in the lightweight division, and may well have clinched himself a spot in the division’s top-15. The Iranian-American now owns a solid 11-1 pro record.

Miller, on the other hand, likely makes his exit from the lightweight top-15 after years as one of the division’s top-ranked fighters. And though he remains a tough out for any lightweight on the roster, and a big test for up-and-comers, he may have just waved goodbye to his title hopes for good. With a record of 24-6, he now enters the first two-fight losing streak of his long and illustrious career.

Though he showed signs of fatigue fairly early on in the bout, it didn’t turn out to matter. With just seconds left in the first round of their light heavyweight bout, Ovince St. Preux turned the lights off on the much-hyped Patrick Cummins with a perfectly-timed uppercut.

Naturally, the knockout was tremendously impressive on its own. This bout also, however, gave OSP the chance to show off his improved takedown defense, which was called into question after a smothering loss to Ryan Bader in August of 2014. The ever-evolving St. Preux now enjoys a two-fight knockout streak, and a 6-1 UFC record. Here’s hoping he’s paired with Jimi Manuwa next.

Cummins, on the other hand, loses for just the second time as a professional, with his only previous defeat coming in a short-notice UFC debut to Daniel Cormier just over a year ago. And though the two-time NCAA All-American wrestler remains an exciting prospect in the light heavyweight division, his top-10 aspirations, at least for the moment, appear to be dashed.

In a featured light heavyweight duel, Strikeforce veteran Gian Villante scored an impressive TKO win over The Ultimate Fighter 19 winner Corey Anderson. The fight ending right hand followed two and a half back-and-forth rounds, which saw Anderson hit to the head, and Villante land relentlessly to the legs. In victory, Villante moves to 3-2 in the UFC and 13-5 overall.

Anderson, on the other hand, tastes defeat for the first time as a pro, having fallen to a more experienced fighter. That said, at just 25, the Frankie Edgar teammate still has plenty of time to patch up the holes in his game and bounce back.

In the first bout of the televised prelims, Aljamain Sterling scored the biggest win of his young career with a third-round arm triangle choke over Japanese MMA vet, Takeya Mizugaki. The win keeps Sterling’s undefeated record intact, but more importantly, is likely to thrust him into the chaos of the bantamweight top-10. From there, the current shortage of contenders for TJ Dillashaw’s bantamweight belt means the young New Yorker might not be far from a UFC title shot. Not bad for a 25-year-old.

Mizugaki, on the other hand, experiences his second consecutive loss, having fallen to Dominick Cruz in September of last year. Even in defeat, the 20-9-2 veteran undoubtedly remains a high-level fighter, though his days in the divisional top-10 may have temporarily disappeared.

In the third bout of the evening, journeyman Tim Means scored an impressive third-round submission win over George Sullivan. Set up by two and half rounds of striking dominance, the submission marks his fourth win since moving from lightweight to welterweight. And while he’s certainly got some work to do before he’s talked about as a top-10 170-pounder, he is quickly emerging as a prospect to watch in the crowded division.

In defeat, Sullivan moves to 16-4 overall, and has an eight-fight win streak snapped. It’s also his first loss since joining the UFC in January of 2014. And though he’ll certainly enjoy other bouts inside the organization, at 34, he needs to get moving if he ever hopes to crack the division’s upper echelon.

After back-to-back losses to Dustin Poirier and Conor McGregor, Diego Brandao needed a win. In his long-awaited prelim bout with Jimmy Hettes, he got one. Unfortunately, it probably wasn’t quite what The Ultimate Fighter 14 winner was hoping for. After an action-packed round one, the octagon-side physician stopped the bout on account of a cut on a cut on Hettes’s ear, and while Joe Rogan and Mike Goldberg didn’t seem to like it, they aren’t doctors. While it was certainly a disappointing outcome, it was probably for the best.

In victory, Brandao moves to 19-10, while Hettes drops to 11-3 overall, and a tough 2-3 in the UFC. The American’s next fight will definitely be a must win.

In the first bout of the night, middleweights Eddie Gordon and Chris Dempsey looked to rebound from disappointing knockout losses to Josh Samman and Ilir Latifi respectively. In the end, after three close rounds, it was Dempsey that did so. Now 11-2 overall, it’s Dempsey’s first win in the UFC, while Gordon, the middleweight winner of The Ultimate Fighter 19, moves to a disappointing 1-2 in the promotion.

Sterling over Mizugaki, Dariush over Miller, VanZant over Herrig, Holloway over Swanson—as impressive as the wins of Rockhold, Jacare, OSP, and others were, this Newark Fight Night was all about the prospects. With punches, kicks, takedowns and submissions, these young guns ousted their veteran opponents, ensuring that UFC on Fox 15 will be remembered as a pivotal moment in the emergence of an exciting new generation of young fighters.