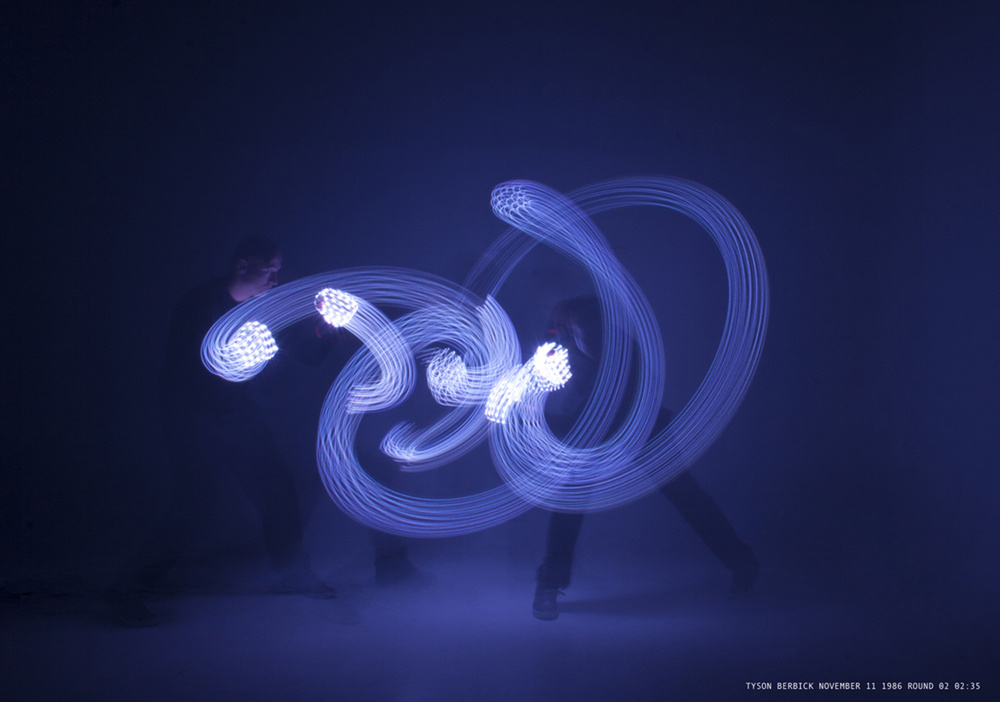 Former amateur boxer and current boxing coach and artist Bart van Polanen Petel first combined his two passions in 2014 when he strapped a series of canvases to a heavy bag and quite literally painted with his fists for his Project Paintbox series.

Van Polanen Petel continues his marriage of art and (sweet) science for his latest offering, Project Phosphorescence, but both the medium and the punches themselves are different this time around. Ditching the paint and wrapping his gloves in lights, the artist studied some of the most famous and pivotal punches and combinations from pugilists like Joe Frazier, Mike Tyson, Lennox Lewis, and Vitali Klitschko. Then he recreated them and photographed the results.

“Now these epic moments in boxing are no longer hidden in a YouTube video, but captured with light, so they can inspire the next generation of boxing enthusiasts,” van Polanen Petel says of the motivation behind the photographs.

We spoke to the artist also known as “Muhammad Dali” about the genesis of Project Phosphorescence, the challenges involved in creating his photographs, his lifelong relationship with martial arts, and the connection between art and boxing. 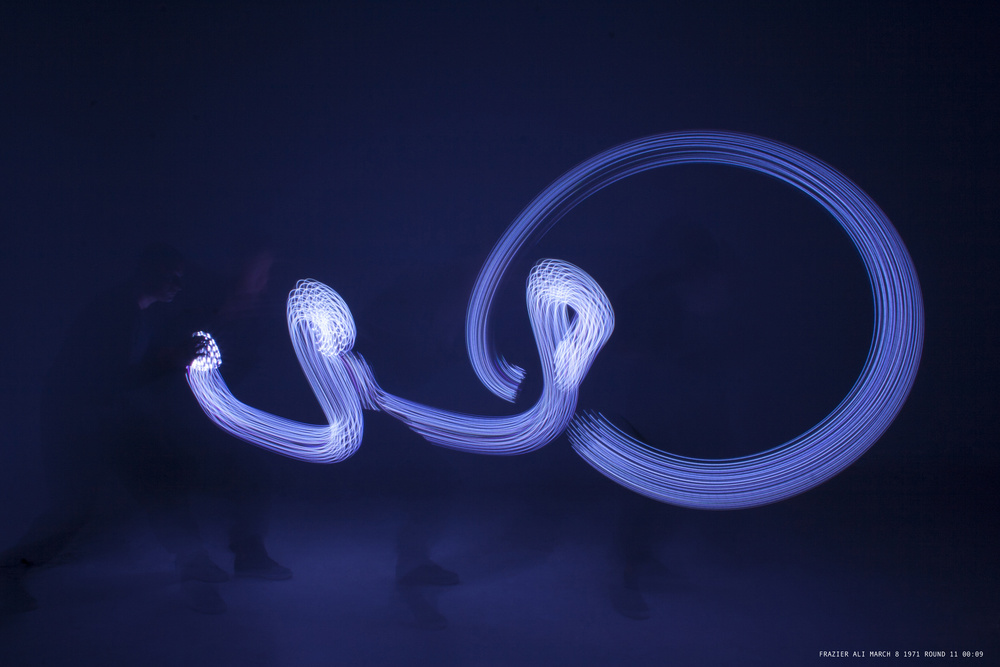 Fightland: Before you were an artist, you were a boxer. Can you give us a brief overview of your boxing career?
Van Polanen Patel: As a little kid I started out with Taekwondo. At age 14 that turned into full contact (Kyokushin) Karate. I competed in several international tournaments and was doing ok, until a low kick-induced knee injury forced me to take some time off. This is where boxing came into my life, relatively late at age 19. I took up boxing, won a series of regional amateur championships and in 2005 became a Dutch (cruiserweight) amateur champion. In that year I also graduated and received my bachelor’s degree in Communications. At 23, with a modest amateur record of 12-2 and an amateur title in my pocket, I was at crossroads. I decided I wasn’t going pro, but not before I had one more boxing adventure. After months of writing letters and calling the Joe Frazier Gym in Philadelphia, one day I was lucky enough to talk to Frazier himself. After that talk he invited me to his gym, where he ended up training me for three months. That was by far the highlight of my boxing career. When I got back to the Netherlands I took up a training job at a local boxing gym. In the years since I’ve trained multiple amateur champions and hope to continue doing so for the years to come.

At what point did you decide to combine boxing with art?
I think it started with an urge to share. I love boxing so much, that I want everyone to see the world hidden behind the general image of aggression and violence. Those who have experienced boxing know that the sport is so much more than what mainstream media portray it to be. Art to me is a way of sharing, of communicating with the outside world. Not that different from writing for Fightland I can imagine. 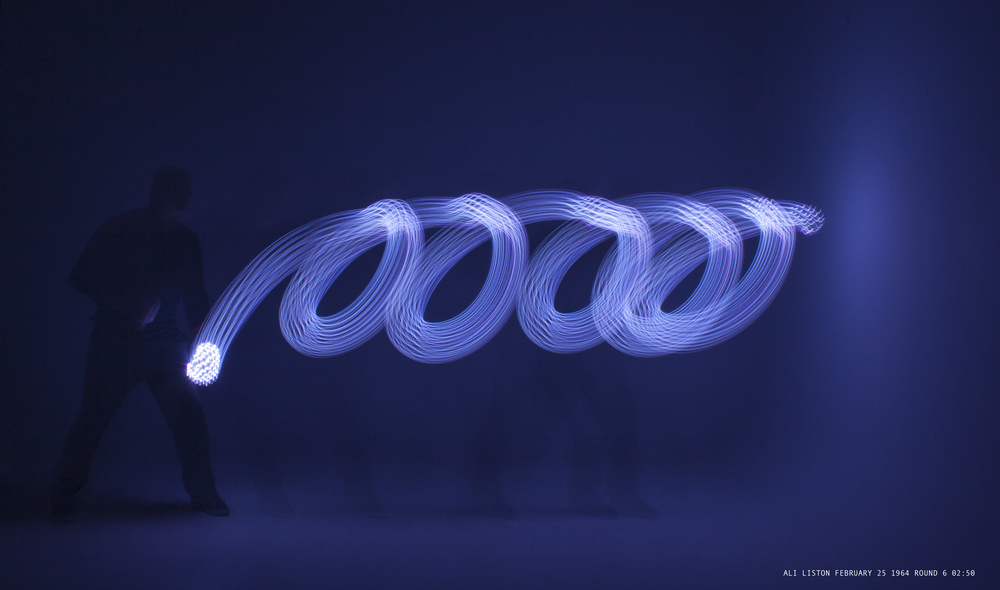 Your original work in boxing-related art involved paint boxing. What was involved in that technique?
Primarily I want to have an imprint of punches. As visual residue of boxing. A boxing bag can absorb punches like nothing else, so I ended up wrapping a canvas around my boxing bag. I dip my gloves in buckets of acrylic paint and start my workout.  After a while you begin to understand the different effects that every punch delivers and you can begin to control what is happening on the canvas. Not too much though, it has to be real boxing that creates the painting. It’s about the art of boxing instead of boxing art.

What inspired your transition to photography, and what is now known as Project Phosphorescence?
It was a TED talk by Nobel Prize winner Daniel Kahneman. After listening to that talk I wanted to pay more attention to experience in my artistic work. That means taking up projects for experience’s sake. Because it’s plain fun to work on them. Forget that people, myself included, expect me to be that guy that punches with paint. I have a ton of ideas that I want to work on in the future and the main criteria now is whether or not they are fun to work on. If the experience of working on them is a learning and enriching one. The first project I decided to work on was Phosphorescence. 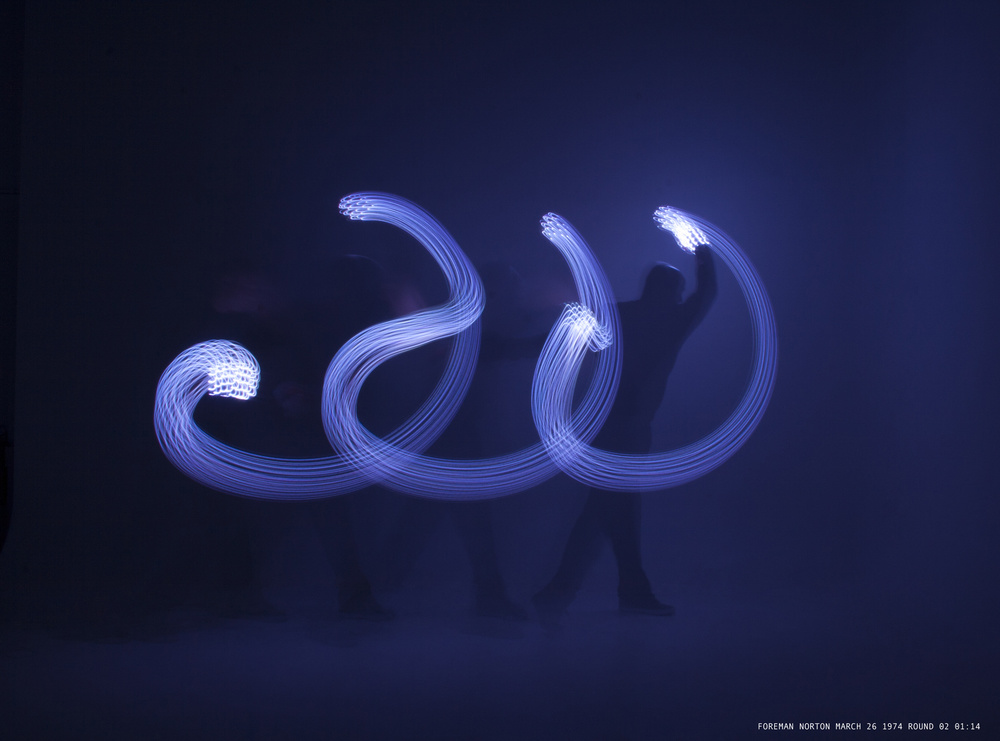 With paint boxing, you were creating art with your own combinations. Were there challenges involved in recreating other people’s striking for Project Phosphorescence?
The biggest challenge was to make the combinations visually attractive. If you just throw punches with glowing gloves, the image gets very blurry. I wanted every punch in a combination to be visible on camera. That means that sometimes I had to hide one glove behind my body to keep the focus on the other. Other times I had to curve my gloves so that the movement of the punch became more visible, or take a step forward to isolate the second punch from the first one. Also adjusting the speed of the punches so the camera could “catch” them turned out to be quite the challenge.  I got to learn a lot about photography during the project, which was part of the fun.

During the photo-shoots I tried to stay true to the typical styles of the different fighters. So “Peek-a-Boo” style for Tyson and “Philly Shell” for James Toney for instance. As a boxer I used to love to study the different styles, so I could rely on that for this project.

What specifically was it about the ten combinations that you’ve captured for this project that inspired you?
They were all already in my head before I started the project. I used to watch hours of fight material every day. To learn from but also definitely for entertainment. After years of watching fights, a couple of them stand out of the crowd. Every fan has these I guess. When I think of Holyfield-Bowe I think of the round 10 uppercut that hit Holyfield flush on the chin. Connected to that is the drama of Bowe being a former sparring partner for Holyfield, that used to gas in the later rounds. Surprise, he didn’t. Frazier-Ali I speaks for itself, as does Ali-Foreman. But also Vitali Klitschko’s uppercut straight combination that finally finished Sanders in round 8 of their fight is on my mental hard drive. I love the story of that fight, where Vitali avenges his brother’s loss to the game Corrie Sanders. What a great fight.

Every combination is connected to the drama, the story behind the fight that goes with it. They were in my head, now they might be in yours too. That is cool. 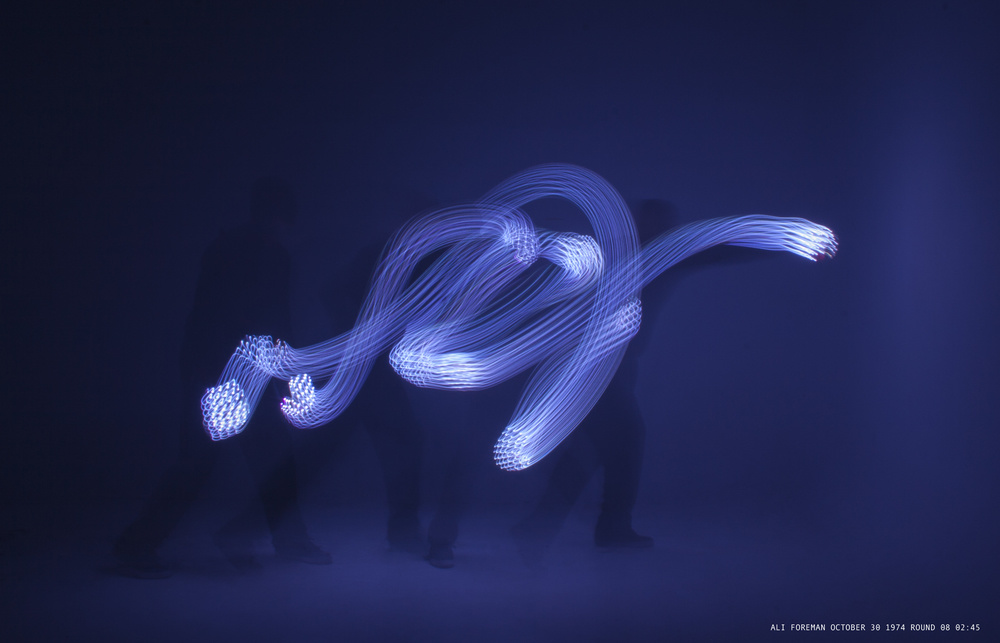 Are there any other combinations that you might have wanted to capture that were either too complicated to recreate or just didn’t work out for whatever reason?
Yes, a lot. I have tried to balance esthetics with reality. So I wanted to showcase the authentic combination in a visually attractive way. But this is harder than it sounds for most combinations. For instance the one-two that Foreman knocked out Michael Moorer with. It was really hard making that not one blurry line on camera. It still didn’t turn out to be really impressive. It has to be in there though, because of the story behind it.

As someone who has now participated in both worlds, what similarities do you see between boxing and art?
Modern art and boxing have one great feature in common. They make you question yourself. When you are in hard sparring you question yourself constantly. Who am I and who do I want to be. When you visit a great modern art museum the same questions pop up.

Boxing has been fairly well represented in film, novels, poetry, and other media over the years. What do you think it is about the sweet science that lends itself so well to artistic expression?
I think that the balance in boxing between violence and entertainment is just about right for our current society. Enough blood to entertain our primal urges, but also civilized enough when the ref gives a standing eight count. We also have had a lot of lasting undisputed champions in boxing. That means that we as fans and artists could invest our focus on a contender becoming champion and follow that champion for years and years. Get to know everything about him/her and take that into consideration when we see “our” champion in the ring competing. That makes for dramatic fights. With for instance the UFC and Conor McGregor, Ronda Rousey and Jon Jones, things could turn out the same. It shouldn’t matter if they win or lose, as long as they come back and overcome the story gets better and even more fans and artists will be inspired. Time will tell.

Do you think there are any other combat sports that would make good muses, or is there something unique about boxing?
The heroes in boxing usually stick with their styles. For better or worse. This might not be smart, but for the image of the hero it is ideal. Frazier had his left hook, Ali the jab. You knew what they were about. In MMA the fighters are more open, versatile. Just look at how my fellow countryman Alistair Overeem changed his game. Very smart for the fighter, but also more difficult for fans and artists to invest in.  Those that stick to their game, like Mark Hunt and Dan Henderson, are bound to lose some of their fights because their styles are too obvious. But we love them for it.

Will you continue to work with boxing in some way in your future projects?
No doubt about it. It’s all about the sweet science. The next project is already taking shape, using iron and rock. Should be a fun ride.