Fighting and Dancing With the Cossacks 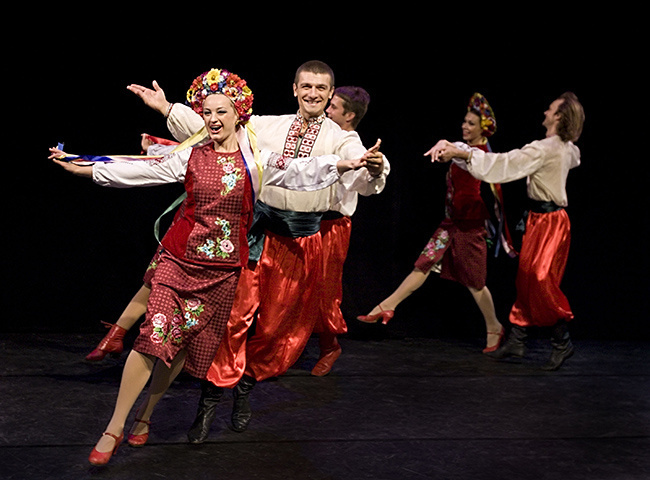 Ukraine is a land torn up by conflict. Once home to free-roving bands of warrior Cossacks who rejected serfdom and fought for their freedom in the wilds of the steppe, Ukraine since the 18th century has been a rope in the perpetual tug-of-war between Russia and Europe. Living in an oligarchy where brawls occasionally erupt on the floor of the national parliament, modern Ukrainians find themselves still caught in the crossfire of an economic war.

In the midst of that war Ukraine struggles to maintain its sense of cultural identity. The myth of the fiercely independent Cossack lies at the heart of modern Ukrainian nationalism. From the birth of modern Ukrainian/Russian literature, Cossacks have embodied martial values. To quote a father’s advice to his sons in Taras Bulba, Ukrainian author Nikolai Gogol’s 1835 story about a Cossack family, “A clear field and a good horse, that’s the kind of petting for you! And do you see this sword? That’s your mother! All the rest people stuff your heads with is rubbish; the academy, books, primers, philosophy, and all that, I spit upon it all!”

So it’s no surprise that the Cossacks have their own fighting style, or that their fighting style is making a comeback after decades of Soviet repression and forced cultural integration.

Derived from traditional Hopak dance, combat Hopak mainly uses kicks and strikes, with some grappling, and it’s unique in its use of rapid vertical transitions, with fighters moving swiftly from crouches to acrobatic jumps, just like dancers do during traditional Cossack celebrations. Over the last few decades, combat Hopak has energized a movement of uniquely Ukrainian identitarianism, a movement built around the (once-endangered) notion of Ukrainian cultural pride. Leaping kicks, rapid transitions from low-crouching sweeps to high-flying aerial attacks, baggy pants, and fur hats. Curved swords, flails, staffs, war-scythes and a wooden club that looks like something the ogre from Jack and the Beanstalk would have carried. These are the elements of combat Hopak.

How combat Hopak became dance Hopak is another chapter in the vast and neverending story of how one group of people are put down by another. In 1775, Empress of Russia Catherine the Great launched a surprise attack on the Zaporizhian Sich of the lower Dnieper, putting an end to the independence of the Ukrainian Cossack warriors. A staunch monarchist who scoffed at the failure of the English crown to control its colonies, Catherine subdued the Cossacks by bringing their leaders into the fold of the Russian nobility. In a political move that foreshadowed the current situation of a supine oligarchy enriched by Russian overlords, Catherine the Great transformed the independent Cossacks into loyal clients and defenders of Russian imperialism. Those who resisted perished or languished at “monastaries” in Siberia.

As a result, the primordial Cossack heritage of combat Hopak sunk into obscurity, or was gentrified. A centuries-old heritage of hand-to-hand combat passed down from generation to generation morphed into a charming style of dance. Considering that Catherine the Great saw her quest to master the Cossacks as a humanitarian project to transform wild, roving raiders into docile family men, it’s not surprising that fighting ended up as terpsichore.

Beginning in the mid-’80s, the gradual dissolution of the Soviet Union meant that for the first time in over 200 years, pre-Soviet cultural traditions like combat Hopak had a window for expression. Ukrainian karate expert Volodymyr Pylat began compiling records on the techniques of dance Hopak and recognized that Cossack heritage had left a legacy of combat techniques hidden in a dance. So, Pylat traveled the Ukrainian countryside meeting with dance Hopak experts, many of whom also happened to be noted fighters and community leaders. Working with expert Myroslav Shukh, Pylat condensed the techniques into a full fighting system.

In 1985, Pylat opened the Experimental School for the Study and Research of Ukrainian Fighting Culture. In the following decades, he wrote several books on fighting Hopak while teaching at his school. More than a self-defense technique, Pylat’s Hopak called on students to live healthy and virtuous lives. Anyone who couldn’t quit smoking and drinking within two weeks of undertaking training was asked to leave. Pylat’s vision of a uniquely Ukrainian martial art grew out of an image of positive Ukrainian identity—without, hopefully, resorting to nationalism.

But a country and a people can't just escape the past, and rumors of nationalism have begun to plague Hopak. A recent The World article mentions possible ties between the martial art and the right-wing, anti-semitic, anti-Russian Svoboda political party, whose slogan is "Ukraine for Ukrainians." As a result, Volodymyr Pylat claims he's been labeled a nationalist, and some regions in Ukraine have banned combat Hopak. However, Yuri, an instructor at the School of Boyovyi Hopak in Chicago, rejects the connection.

“Generally, national martial arts in any country promote patriotism and respect to the traditions. So does Boyovyi Hopak," Yura says. "But it never promoted any intolerance or disrespect to any other nationality or religion. There were even Muslim (Crimean Tatar) students of this art. Anybody can join the school and is able to study the art. [Svoboda has] 38 out of 450 parliament members as we speak. It is a regular right-winged party, like any similar party in Europe. The party gained notoriety just a few years ago, and fighting Hopak was developed about 27 years ago, so I don’t know how it could be connected.

"Basically it’s like claiming that boxing clubs are some special Republican party military formations, and that the party itself is xenophobic and Islamophobic because under Bush the U.S.A. invaded Iraq and many soldiers trained in boxing!”

The Rebirth of Cambodian Kickboxing