Fighting Chance: A Boxing Gym For Kids Who Need It 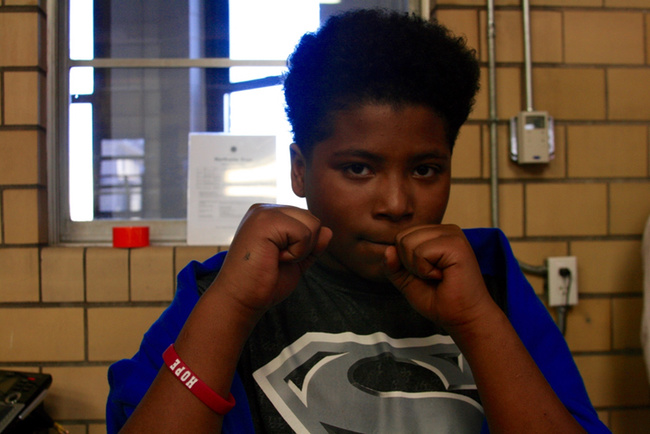 The Fighting Chance boxing gym is located on the Minneapolis Northside, in a re-purposed fire house that had stood abandoned for nine years. Neighborhood kids used to throw rocks through the windows; climb through, hang out and maybe smoke some weed. Now they peer through new windows and walk through freshly painted doors; sign up, lace up and maybe get a hot meal.

Since it opened on March 28th, the non-profit gym has seen more than 250 kids come through its doors. Middle school boys and girls, a few teenagers, and a smattering of little ones, anywhere from eight to ten years old. One homeless family rode the bus all night and then showed up in the morning, ragged and starving. The five children dug into some Sloppy Joe’s from the gym’s kitchen while the aunt raising them sat and rested. Kids train for free here, anyone over 18 pays between $15 and $25 per month. 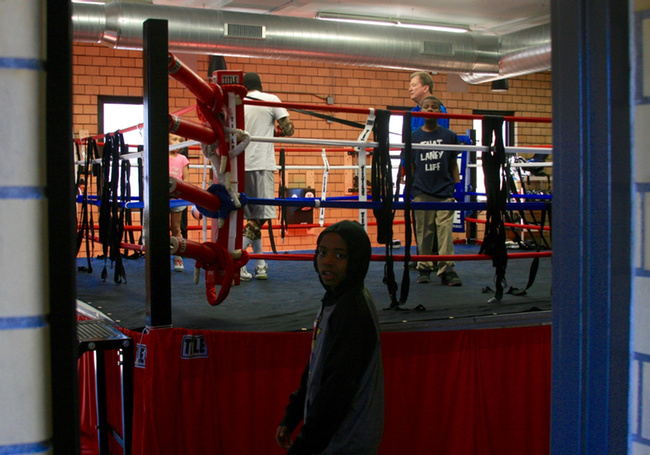 Fighting Chance has speed bags and heavy bags, a ring and work-out room, built out bathrooms with a shower and a fully functional kitchen. It looks clean and inviting, sunshine pouring through the windows onto children learning how to wrap hands, punch stuff, and jump rope.

The gym is the brainchild of Victor Mills, a longtime Minneapolis police officer who spent the last few years of his 23-year stint in the city’s public schools, helping to keep kids on the straight and narrow. Mills boxed himself, training at Uppercuts in Northeast Minneapolis, and he found taking kids from the troubled Northside of the city to gyms in other parts of the city had an impact. Boxing requires a lot of one-on-one attention, which kids crave, and anyone who has hit the bag and felt a hook sink in right knows how good that feels. You want to do it again and again, feel the confidence build and let that aggression and stress out on in inanimate, receptive target. 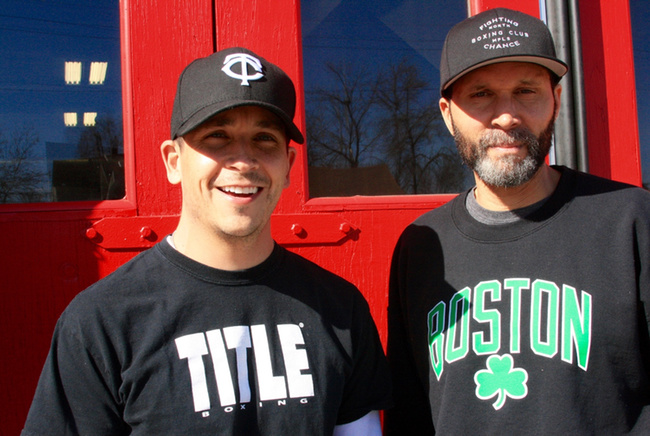 “We have a few kids here who are really getting into it,” Mills said. “There’s this kid D, big afro, he came in and his mom was like, ‘he’s real shy and doesn’t like to hit anything,’ but this kid has crisp, straight punches. Doesn’t say nothing, just comes in and hits hard. And this other boy Mo, he’s got punches too. I didn’t believe him when he said he’d never boxed before, but his mom said so too. I’ve been really surprised at how many kids have come through, how good some of them are. We've almost been overwhelmed by the reaction.” 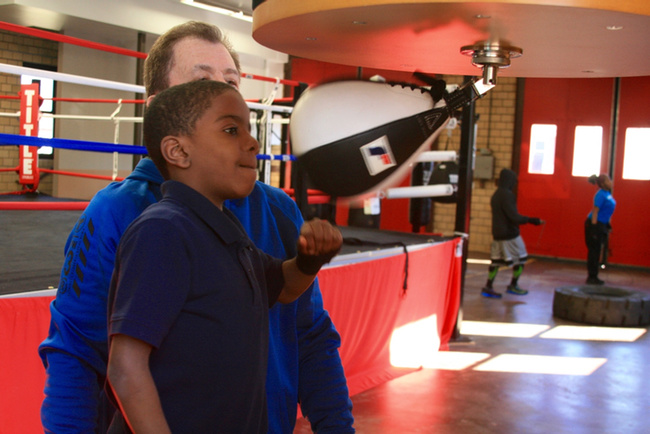 Kids on the north side of Minneapolis need this. North Minneapolis has been synonymous with crime and drugs for at least 20 years. On a sunny afternoon, the rows of single-family homes belie the violence that goes down here on a regular basis. This is where the local Black Lives Matter movement and allies staged a protest for several days last winter, calling for a release of video footage in the shooting of Jamar Clark.

Clark’s death rallied people who have been marginalized in this city of extremes for far too long. Black poverty on the Northside contrasts sharply with White affluence in the south, and in the surrounding suburbs. Livable as it might be for middle class whites, Minneapolis has been criticized for having the worst economic divisions along racial lines in the country. 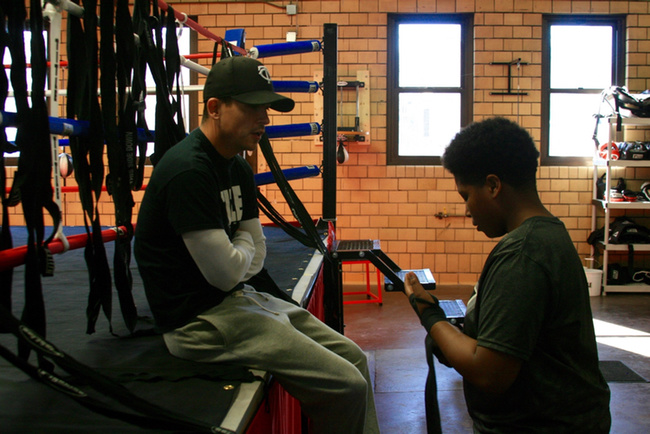 Ryan Burnet with a student

Mills, 51, stands squarely athwart the chasm, as a self-described “former knucklehead” raised on conflicting doses of petty crime and a stern motherly hand. It was the boxing gym that eventually helped turn his life around, steering him away from his father’s path, which ended in jail, and toward a life as a police officer and guide to lost children.

His partner, Ryan Burnet, grew up on the wealthy side of the split. He is the son of local real estate mogul Ralph Burnet and VP of several of the city’s hottest restaurants. In photos for the media he looks the part: clean cut, white, self-assured. In person it’s a bit different. I walked right past him in his sweatpants, T-shirt and fitted cap, figuring he was a trainer like a few of the ex-cops and fighters in the gym. Despite disparate backgrounds, Burnet blends in easily with guys like pro boxer Mohammed “The African Assassin” Kayongo, who came over from Uppercuts to help train the kids. 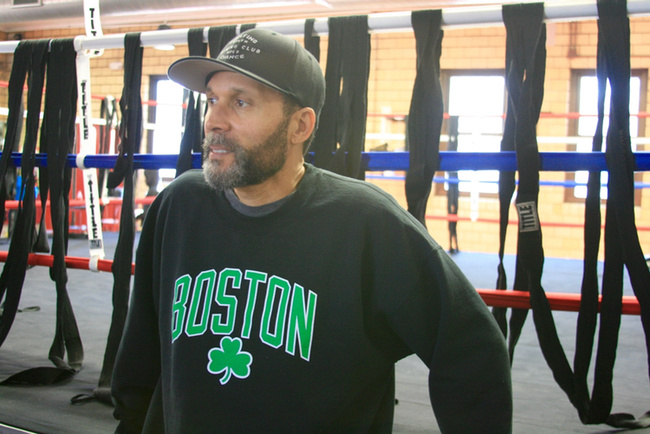 Burnet and Mills met at Uppercuts and when Mills was looking to expand the program he had started in the school as a police officer, Burnet stepped in. Mills was looking for a facility, a gym on the Northside where there should have been one long ago; a place where kids can eat good, train hard, and be safe. Burnet went through his rolodex and helped secure financing from private donors and big names in the local scene, from the Pohlad Foundation and others. They managed to raise $800,000, a lot of which went toward refitting the dilapidated fire house.

The partnership slowly took form in my mind after formally meeting Burnet. A former knucklehead turned cop and a wealthy scion who boxes meeting up in the city’s most troubled neighborhood to give children something to do and something good to eat. There wasn’t any of the black and white rhetoric surrounding police brutality and black crime, Northside dysfunction and Southside privilege. This fire house has become an island of sorts, a place to build different kinds of connections. 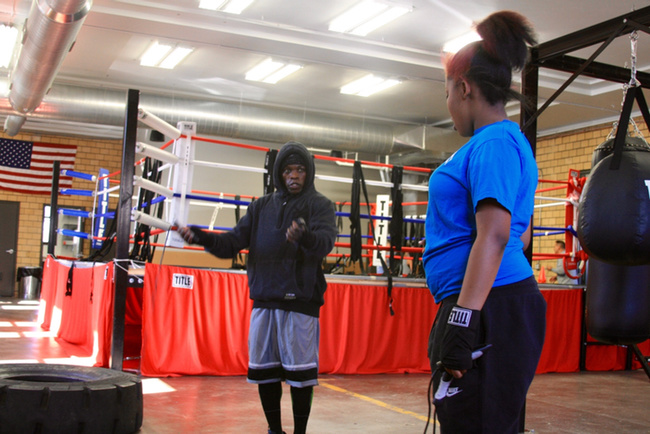 “Really it’s all about respect,” Mills said. “If we can get the police and people in this neighborhood to interact with respect, that already changes a lot of things. Part of it is just how we present ourselves, I mean, if I were here in uniform I’m sure things would be different and more difficult.”

Hope and Fisticuffs in the Land of 'The Wire'