Fighting in Make-Up for One Million Baht: Behind the Scenes at 'Muay Thai Angels' 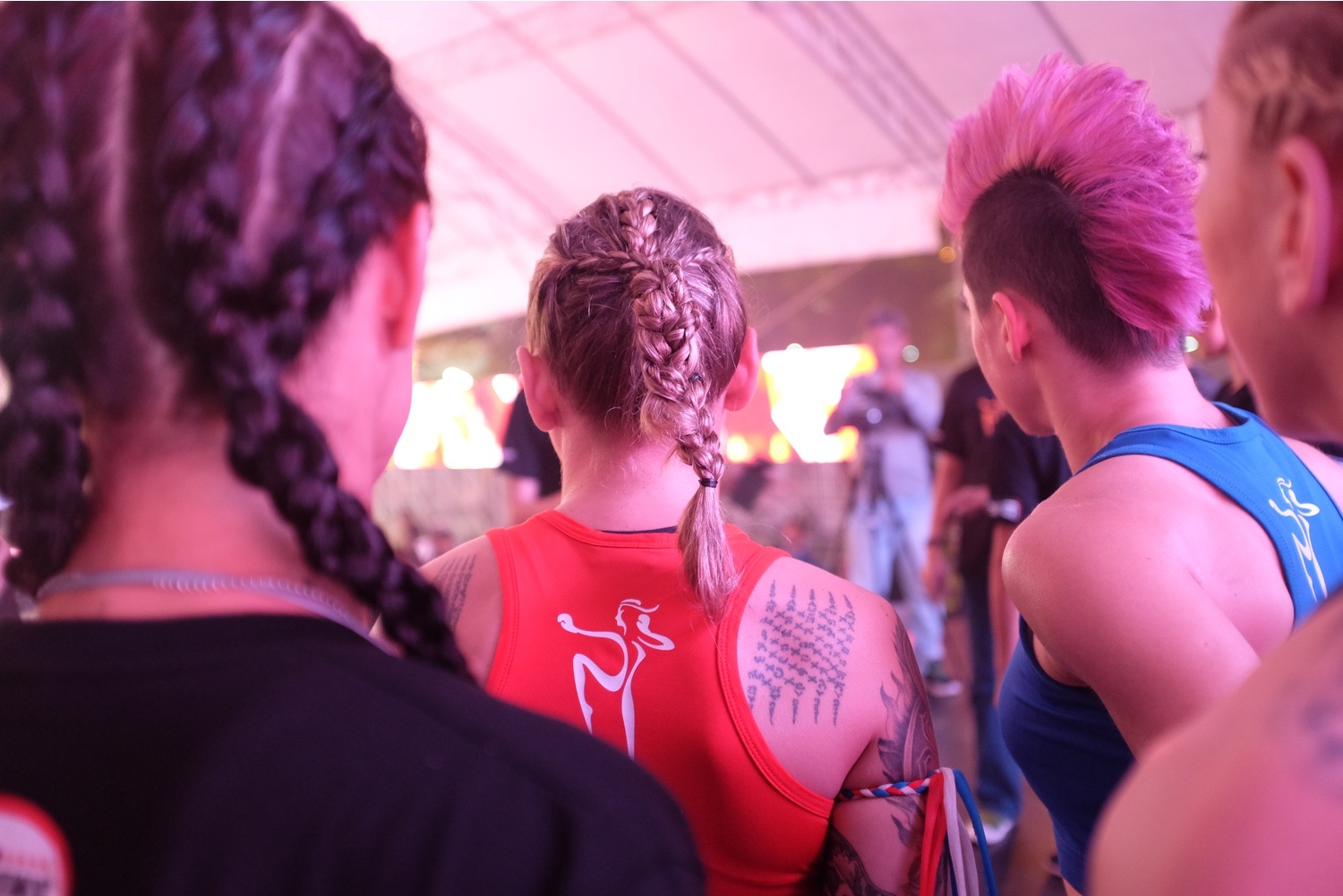 It's possibly the biggest female Muay Thai tournament in the world. Sixteen competitors from all over, coming together over a three month period to see who will be the World Muay Thai Angels Champion. The promotion went quiet since its last show way back in February of 2015. It's unsure why the event, gaining so much attention in the Thai media, hasn't been made an annual occurrence. But if the first show of the tournament has proven anything, it's that it has got stellar production value, and a quality line up of female fighters.

Sixteen women have now become eight, and in May that eight will go to four. The day of the final tournament has yet to be set, but similar to last year the remaining four female fighters will have to fight twice in one night to win the first place prize. The fights are full Muay Thai rules, complete with the wai kru and bee Muay music, but what's different is that the fights have been reduced to only three rounds. In Thailand, Muay Thai is traditionally fought over five three-minute rounds and five two-minute rounds for women. These fights have been adjusted to three three-minute rounds. It differs from Max Muay Thai in that aggression and forward movement is not overly encouraged. Instead fighters are told to fight as they normally would, with the exception that, being only three rounds, they must satisfy the judges in the allocated amount of time.

Prior to competition, the women were divided in groups for themed photos shots. Themes included "dark," "sexy," "fighter," and "beautiful." Women were also required to do shots with the Angel branded fight apparel, in addition to some short videos as well. For most of the women involved in the tournament, this much attention and promotion was a fairly new experience. Women's combat sports are still severely lagging behind their male counterparts in terms of payouts and exposure. The photo shoot lasted an entire day, giving the women ample time to get to know each other, and with so much in common it's hard not to become friends. But fight night showed us that once they are in the ring, these ladies mean business.

Standouts from the first round of the tournament included Natalie Morgan from the USA, Yolanda Schmidt representing South Africa, and the reigning Muay Thai Angels champion Chommanee Taehiran from Thailand. It's expected that these women will be meeting each other in the final four.

Natalie, who was themed as dark for her photo shoot, scored a clean KO via spinning back elbow on her relatively unknown Chinese opponent, Sung Jing. It was the only KO of the night. For Natalie, this was a huge opportunity and her first fight on international soil. The biggest difference between fighting here versus her native country? Make-up.

"In the US it is illegal to wear makeup when you fight and honestly, there was too much makeup. Most of it came off before the fight just from sweating. I wiped it off a bit too, we were all worried we would get mascara in our eyes while we were fighting! That's not something you want to be worried about in there!"

Yolanda Schmidt, who's been making waves in the Muay Thai scene in Thailand for the past few years, was put into the fighter-themed photo shoot. Yolanda has an extremely bubbly personality, she pretty much never stops smiling—and that includes when she's fighting. She struggled trying to look mean in her photo shoot, but completely dominated in her fight, scoring a second round TKO over Australian Nicola Callander.

Defending champion Chommanee Taehiran has made huge improvements as a fighter since the first tournament over two years ago. Her fight was not only beautiful technically, but she also satisfied fight fans with her newly found aggression and power. She made quick work of Funda Diken of Turkey, winning by TKO in round two. Based on her most recent performance, she's looking like the frontrunner to be this year's winner as well. The Thais, who placed her in the sexy category of the photo shoot, love her full package appeal. A smart, beautiful, well spoken, young girl who can fight? She's a dream for a production team like Muay Thai Angels and they spend a lot of time promoting her. She's done training sessions with Buakaw Banchamek and appeared on Thai TV on numerous occasions.

Despite the photos, the make-up, and the production value, make no mistake that these women are fighters. And with 1 million Baht (30,000 USD) and a Toyota Vios on the line, these women are motivated. It is the largest payout of any female Muay Thai tournament to date. Spectators often don't realize what athletes must forfeit to compete at this level. As Yolanda explains,

"As a struggling professional athlete, the million Baht prize money is much welcomed. No one outside of our sport truly understands the financial sacrifices and strains that are presented. Personally our expenses exceed our income, so winning that could most definitely pay off some debt."

The next fight night will happen sometime in May and is rumoured to be in China, but nothing has been confirmed as of yet.