Fighting Over Fighting on Indian Land 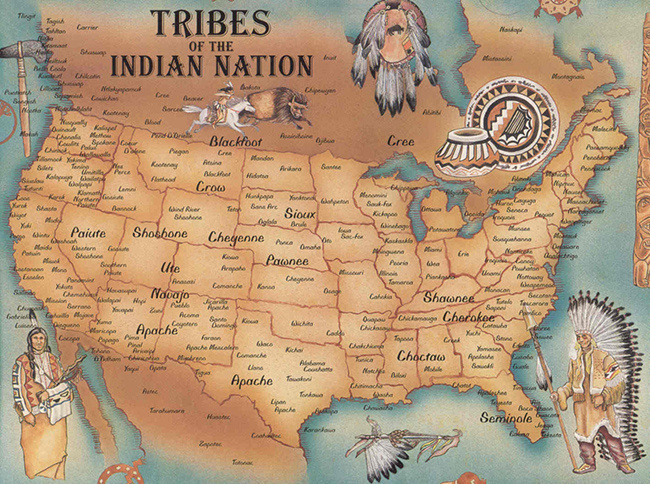 Last February, Craig Helton put on an MMA event in Atmore, Alabama, and pulled the scab off a wound as old as America itself.

War IV was sanctioned by the Poarch Band of Creek Indians Athletic Commission, the combat sports governing body of the only federally recognized Indian tribe in Alabama, and held on tribal land. Still, despite the promoters’ claim that all medical and safety requirements had been met, immediately following the event the Alabama state commission put all the fighters involved on a 60-day medical suspension, a practice consistent with Association of Boxing Commissions (ABC) policy but a decision that to many in the Indian-land MMA community felt like the continuation of a long tradition of government intrusion and paternalism.

“The part that makes everyone mad is that people are uneducated about the fact that tribes are governments,” Craig Helton says. “You can’t tell another government what to do. This is the problem that I have, when the state requires someone to join a private club, and that’s what the ABC is. It is not a federal entity; it is a private club where you pay membership dues. I am a supporter of the 2nd Amendment, but nobody should come along and tell me that I have to join the NRA. … We want to be a part of the ABC for the benefit and convenience of it, but I don’t like the sound of them making us join.”

In the eyes of the federal government, tribes and states have carte blanche when it comes to MMA--there is no Mother Goose watching over them. Instead, the rules of MMA are engrained in state and/or local governmental bodies. Currently, MMA is regulated in most states by a boxing or athletic commission. The Association of Boxing Commissions is a private non-governmental entity made up of a majority of states and 20 tribal regulatory bodies. All members have a vote on combat sports policy, even though the ABC has no real oversight or authority. The ABC can’t force a state or tribal athletic commission to take certain actions, just as Google can’t force California to do something; the aim of the ABC is merely to provide standards for a sport that lacks uniformity in its rules and their application. But the tension between governing bodies like the ABC and tribal authorities predates MMA and is just a small part of a larger, and longstanding, problem.

Indian tribes are not well understood in the United States. The general populace does not see them as autonomous governmental entities. But they are. And since MMA is only regulated by governments, Indian tribes have the authority to set forth their own rules and regulations.  This sets the stage for conflicts between states, Indian tribes, and the ABC, particularly in the south, the front lines of the growth of the sport.

The ABC will say that most of the unsanctioned fighting out there is happening on tribal land, but that’s true only because most of those tribes don’t have organized gaming commissions or have such poor relations with state governments that no government-to-government agreement regarding MMA regulation can be reached. This is a huge problem because the infusion of revenue and consumer spending brought in by MMA is vital to tribal communities, where unemployment rates dwarf the national average.

The irony of this conflict is that mixed martial arts owes an enormous debt of gratitude to Indian tribes. When the sport was still largely illegal in the states, MMA was shaping itself in tribal casinos like Soboba, Colusa, and Tachi Palace, outside the regulatory purview of the states. The spirit of tribal sovereignty made it possible for future UFC stars like Urijah Faber, Chael Sonnen, Rashad Evans, and Jose Aldo to compete without breaking any laws.

Jim Erickson is the man trying to broker the conversation between the ABC and the tribes. Jim was the boxing commissioner of North Dakota for 17 years and now serves as commissioner of the Mille Lacs Band of Ojibwe Indians in Minnesota.  He is also vice president of the ABC’s Executive Committee and chairman of their Tribal Advisory Council. Despite his respect for the demands of tribal sovereignty, Erickson’s primary concerns are uniformity and safety.

“There are promoters who only see commissions as an attack on their bottom line,” Erickson says. “We had a Native American athletic commission summit here in Minnesota in March and had 13 tribes represented. We don’t try to force tribes to do anything; we only can educate." Erickson sees enormous risks for tribal governments that shirk ABC sanctioning and regulatory oversight, not to mention risks for the mixed martial artists who fight for them.

“Here’s what can happen,” he says. “Look up Shaine Emmons. He fought at a state-regulated pro event in Minnesota on a Friday night.  He got knocked out, he was put on a 90-day medical suspension, and he was also required to get medical clearance. The following Friday he went across the border to Iowa and fought in an unsanctioned amateur match and got knocked out again and the very next day went to Wisconsin and was stopped by strikes. That’s three times in a seven-day period. What if this kid decides he wants to fight a fourth time, at your tribal casino, and he dies because of secondary concussion syndrome?

“One thing to understand is that even though tribal sovereignty is a very strong and great thing, the most important thing is safety. My goal is that every bout is regulated, whether the state does it through a compact, the tribe itself does it, or another tribe comes in and does it. Some tribes do a better job than the states at regulating. We just don’t want to see tribes doing nothing.”

Erickson says it's non-ABC member tribes that are putting on the majority of unsanctioned shows--some for noble reasons, others for less-than-noble reasons.

“I understand the pushback,” Erickson says.” We are not saying that you can’t have events; we are just saying that someone needs to regulate them. In the past, tribes have picked a specific sanctioning group to regulate all the amateur shows. The problem is that some of these groups are promoters. So now the problem is, one, you have promoters regulating themselves, and two, they can lock out all other promoters. There is a set of rules for amateur MMA but not one group that can make sure the proper groups are overseeing the sport.”

Alex Pearl, a law professor and an enrolled member of the Chickasaw Nation of Oklahoma who teaches and writes about Indian tribes, tribal sovereignty, and the interaction between states, tribes, and the federal government, says that in order for standardized regulation to work, its guidelines need to come from within what he calls “Indian country.” As long as tribes feels like outside governmental entities are forcing them to accept sanctioning guidelines without their input—as long as regulating organizations fail to understand what Pearl calls the “nuances of federalism or tribal sovereignty”—those guidelines will always remind members of the Indian community of centuries of broken promises and government overreach.

“This fight has been going on for a century all across this country between tribes and states,” Pearl says. “It’s not anything new under the sun. It seems new in this context because it’s about MMA, and not about whether the state can regulate the amount of fish a tribal member can catch under the Treaty of Point Elliott, [but] this is about whether the state wants to regulate anything.

“An outside entity is telling the tribe, ‘Here’s what you need to do.’ People in Indian country are going to recoil at that. The conflict that’s going on--this problem that the Poarch Band of Creek Indians has with the state of Alabama and the ABC trying to work with them--dates back to the Fishing Wars of the Northwest, the hunting rights in the Great Lakes, and water rights in California. Tribes and states, as the Supreme Court has said, are often deadliest enemies. The challenge for MMA is develop an approach to tribal and state relations to overcome these problems.”

Life, Liberty, and the Pursuit of MMA