Fighting the Cult of Domesticity 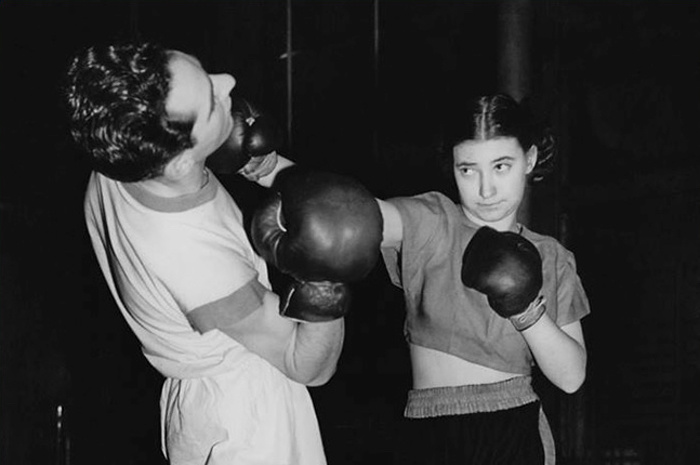 The twentieth century brought forth unprecedented growth in science, industry, and technology, catalyzed quite often by war. During World War II, women took over jobs that had once been held by men in order to continue industrial growth and support the troops as they fought abroad. While individual men may have scorned the idea of dealing with women in the workplace, the government’s support of the female laborers trounced whatever hostilities existed amongst men. Women were fully integrated into the war effort and, because of their new position outside of the home, gained an extraordinary amount of freedom. Women not only took part in men’s work, they were now to take part in men’s athletics. The all-women’s baseball league in the United States famously took the place of regular professional baseball during WWII.

When the war ended, most women were expected to give up their factory and industry jobs in order to allow the returning soldiers a place to work. In this decade after the Second World War, there is an insistence in popular culture to remind women of their roles as homemakers and wives. While the 1940s saw a historical shift in women’s roles outside the home, the 1950s bore the brunt of the reaction to those shifts. Prior to World War II, the home remained the women’s sphere, while during the war, the factory became the woman’s new home. After the war was over and women were encouraged, if not forced, to return back to their homes, the following decade in America’s popular culture sought to perpetuate the domestic fantasy of the good, stay-at-home wife who was passive and feminine. Clothing has often been used to regulate the female body; post World War II era clothing for women restricted movement, signifying the return of women to the home and out of the workplace, where clothing had been forgiving to allow for work. Christian Dior's New Look, while incredibly beautiful, is remembered as the return of the constricting corset and hobble skirts. Post-war fashion reminded women of their duties to their homes and husbands as mothers and wives.

However, the end of the war did not completely diminish the gains that were made by women in the intra-war years. Most married women left work for their expected roles as a housewives and mothers, but young single women continued to work before marriage. The desire for women to remain physically fit meant that all types of exercise, including fighting sports, became more regularly practiced by women. 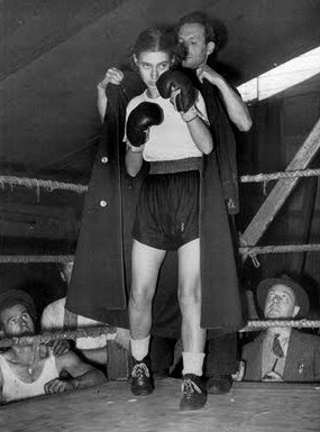 In 1948, an eighteen-year-old British girl, Barbara Buttrick, known as “Battling Butt,” was a tiny and scrappy fighter, standing at only four feet, eleven inches tall and weighting just under one hundred pounds. A typist by day, Barbara issued her first public challenge that year to any 98 to 112 pound girl who would face her in the ring. Three young women immediately responded. Her mother was nonplussed because she had hoped that her daughter would only box as a hobby, not in public. But Barbara faced other difficulties in her boxing career besides her mother’s consternation. First, given her small frame, she had difficulty in finding an opponent of appropriate size. She entered the headlines before her career truly began, not only by calling out women in 1948, but by agreeing to participate in an exhibition fight against a man. The fight was called off, but by the following year, Barbara fought professional boxer Bert Saunders in a three-round exhibition match. Unfortunately, exhibition sparring was Barbara’s only real fighting option in Britain at the time, which meant that her venues were primarily theaters and performance spaces rather than a boxing arena.

The British Boxing Board of Control refused to give her a license to officially fight, despite her promise to represent her country as the greatest female boxing champion. And the Boxing Commission was not the only institution that took a stance against Barbara. The Variety Artists’ Federation, a trade union formed to protect the rights of various types of performers, spoke out against female boxing, claiming that it was “degrading to the best interests of variety public entertainment, the boxing profession, and womanhood.” The Federation’s claim that the event would be degrading to women was ridiculed by Nat Tennens, the promoter of Buttrick’s first intended fight, who noted that the VAF supported strip teases and other nude performances, which were much more degrading to women than female boxing.

Despite the many critics who denounced Barbara Buttrick, the tiny fighter continued her quest for boxing glory. During her nearly fifteen-year career, Barbara scored twelve knockouts and lost only once to Joann Hagen, who was thirty-three pounds heavier than the diminutive Barbara at the time of the fight. Barbara worked as a typist during the day, and spent her evenings training at the YMCA under the tutelage of coach Leonard Smith, whom she would eventually marry. She was known for having a very stiff jab, with which she broke her husband’s nose, and floored an impertinent reporter who “suggested that women were better off inside sweaters than in a ring.” The restrictive British anti-female boxing campaign waged against Barbara eventually led to her relocating to the United States in order to further her career. A news story in the Dallas Morning News finally gave Barbara the respect she certainly earned, when it covered a sparring session between her and a 140 pound “porky” veteran fighter named Jose Andres. Barbara had Jose up against the ropes, and after the second round, he told the reporter, “She’s good. Punches hard as a man. Boxes like a professional. I’ve been fighting 14 years and I’ve fought some pros that were worse.” 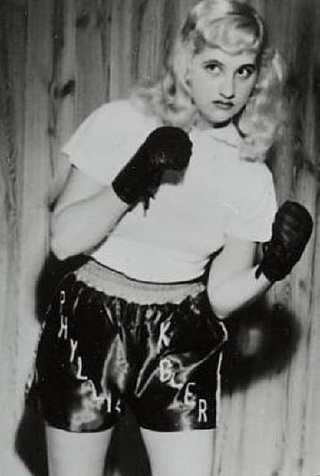 At age 26, Barbara finally received her opportunity to fight for the world title, but the event was not without criticism. One particularly rude announcement in the Seattle Daily Times from 1957 introduced Barbara Buttrick and her opponent, Phyllis Kugler, but informed the reader they could “forget them as soon as you learn they are scheduled to box ‘for the championship of the world.’” Phyllis Kugler grew up in South Bend, Indiana, and became internationally recognized in the boxing community in the 1950s. According to an interview with Kugler in the South Bend Tribune in 2005, Phyllis retired with an impressive record at fifty-five victories with only one loss. She recalled that half of the battle was being allowed in the ring in the first place! Events were often cancelled because two women appeared on the fight card. She flew under the radar for a little while, because she was often called Phil instead of her full, feminine name, Phyllis.

Phyllis was known for her femininity in addition to her prowess in the ring. In 1957, the Fraternal Order of the Police chose Phyllis as ‘woman boxer and Beauty Queen of the year.’ When she was not fighting, Phyllis wore dresses at the behest of her trainer, who must have assumed that this practice of normative femininity would help the fighter gain acceptance outside of the ring. Barbara beat Phyllis in that historic battle, unanimously winning each of the six rounds, and claimed the title of female boxing champion. Three years later, and four months pregnant with her first daughter, Barbara retired from the ring, but not from the world of boxing. Barbara founded the Women’s International Boxing Federation and was elected to the International Boxing and Wrestling Hall of Fame in 1990. Barbara also served as president of the Veteran Boxers Association from 1988 through 1990. 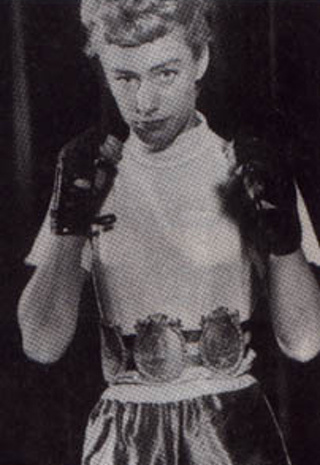 JoAnn Hagen, the boxer who provided Barbara with her only loss, was another celebrated fighter of the era. Most of the information regarding fighting sports in the 1940s and 1950s comes from interviews with the people involved several decades after the fact. JoAnn’s younger brother recalled watching his sister spar at the gym, and being teased by classmates that his sister could beat him up. Her parents were not thrilled when they learned about JoAnn’s career, but one of her brothers claimed that once their father saw her fight, he said, “Well, it looks like you can take care of yourself.” JoAnn defeated the famous Barbara Buttrick in 1956. That same year, she was defeated by Phyllis Kugler, making this triad of female champions inextricably connected in a small fighting community. Phyllis and JoAnn both made appearances on popular televisions shows The Steven Allen Show, What’s My Line, and I’ve Got a Secret. JoAnn rarely spoke openly about her boxing career, although her siblings note that she often said that it was fun. When JoAnn passed away in 2004, her family donated her gear and all newspaper clippings to local museum for an exhibit, so that their sister’s legacy lived on.

Another female fighter who made headlines in the 1950s was Australia’s bantam weight champion, Cath Thomas, who won fourteen of her eighteen bouts and reportedly knocked out five male opponents. After a devastating automobile accident, she gave up boxing, but her competitive nature inspired her to enter the world of ballroom dancing. Reporters lined up to watch her tango while wearing an elegant pink evening dress and looking every bit the ballroom dancer, explained that her boxing footwork aided her dancing skills. She won a gold-medal in a Sydney dancing competition, and regularly practiced with her two young daughters, both of whom enjoyed dancing, and boxing.

Cath, JoAnn, Phyllis, and Barbara competed in the sport of boxing despite many of the harsh criticisms leveled against them. Women who did not adhere to the requirements of the 1950’s cult of domesticity were often censured in women’s magazines like Good Housekeeping and Ladies Home Journal. And unlike many of their predecessors, who boxed during a time when matches were arranged and fought through individual promoters and businesses, these women were limited by the governing bodies of the boxing commission, who deemed them unfit to represent the sport of boxing. Yet all four women remembered their time in the ring with fondness, and the women who fought in following decades remembered them as pioneers.

Cora Livingston and the Spectacular Sport of Wrestling