Fightland Meets: Garry Cook, the Man Who Went From the English Premier League to the UFC 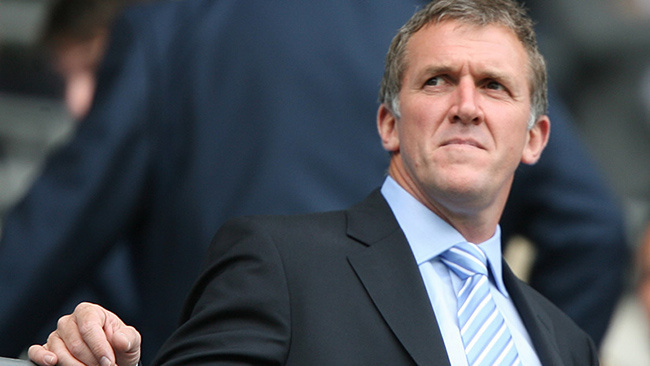 UFC president Dana White, a love/hate figure who tends to either love or hate things himself, has described Garry Cook as a “stud,” an “animal,” and a man who’s done “more in England in the last month and a half than we did there in the last seven years.” But Cook doesn’t wear fight shorts and 4oz gloves to work; he wears a three-piece suit. He’s the UFC executive vice president and managing director of Europe, Middle East, and Africa.

Cook became famous in 2008, when he moved from Nike to became the new CEO of Manchester City Football Club, of the English Premier League. Shortly afterwards, the club was purchased by the Abu Dhabi United Group, making it one of the richest teams in the biggest sport in the world.

Cook’s unapologetic corporate candour played out in a world where fans ideally want their clubs to be run by “one of us.” But he won fans over by raising the club’s profile to compete with its more successful local rival, Manchester United, as its new riches enabled the team to buy several of the best players in the world.

Despite the team’s success, however, Cook wasn’t above the occasional PR gaffe, and a final, sour note marred his tenure when an internal email mocking a player’s severely ill mother sent from his account reached her by accident. He resigned under a cloud, but his links with UFC stakeholders in Abu Dhabi led to a fateful meeting with White and the Fertitta brothers and the start of his new MMA life in 2012.

During our interview, as expected, Cook was unashamedly business-focused. If I’d been playing a drinking game where I did a shot every time he said the words “entity,” “brand,” and “global,” I would’ve been paralytic after five minutes. Instead we stuck to tea and talked for an hour about his life, his work, and what he means for the future of the UFC.

Fightland: Can you remember your introduction to MMA and the UFC?
Garry Cook:Yes. I was in Los Angeles on tour with the Manchester City football team, who will not go on any visit. Unless they’re training, they really don’t want any obligations. We put on a trip to go and see a UFC gym in Torrance, California, and we had to lay on extra transport. I saw that and thought, “Something’s happening here. People’s sporting heroes have sporting heroes."

How does dealing with fighters compare with dealing with footballers?
I would say I have less interaction with the fighters, but it’s more in depth. [UFC light heavyweight] Jimi Manuwa sat in my office for three hours because he wanted to know more about the business.

[UFC light heavyweight] Alexander Gustafsson was on the phone the other night because after 12 million votes he’s going to be on the front cover of the next UFC video game. These guys are fighting for a living, but they know what they represent and really believe they can be the future of a sporting landscape that’s changing. They want to be part of building that.

Are footballers encouraged to think less than fighters?
I would definitely say that. Because they don’t control their own destiny. A footballer is controlled by a coach, the media, and their sponsors.

At Manchester City, when we were on the road overseas, we would leave somebody at the hotel because, on average, 10-15% of the players would leave their passport in the hotel. You have to allocate resources to the inadequacy of a young man to remember his passport.

Another time, a player came to me and said, “I've lost my iPod,” and I said, “Well, I don’t have it, I don’t know who has got it, and I can’t be responsible for finding it and, to be honest, I know how much you earn … go and get another one!’”

I can laugh at that and then I look at the rawness of how Dana [White] manages the UFC. I've seen him stand in a dressing room and say to fighters, “Here’s what you’re going to win if you do this; here’s the amount you could get if you do that.” He’s actually announcing their ability to earn more money as part of the motivation.

That brings us to sponsorship deals in MMA. Fighters such as Jon Fitch say they’re falling. How would you try to solve that problem?
I’m a great believer in “central entity.”

What’s that in English?
[Laughs] I'll articulate that better: What it means is that there’s a controlled amount of equity and intellectual property, and if you bundle it together it’s worth more.

To apply that to fighters: Is it better for anybody to a deal with an individual sponsor, or is it better for us to have a central, official sponsor to be the UFC’s official short, walkout shirt, or drink, for example? Would fighters get more in that model? I believe they would.

There are two problems with that, though: The UFC can cut anyone it wants at any time, so a cut fighter would lose all their sponsorship overnight. Also, its top-ranked fighters wouldn’t be happy about earning less in that model.
I agree those things would have to be worked through. To compare it to the Premier League …

But those are teams, not individuals.
There are only entities. The model can be argued both ways. I’m not saying what’s right or wrong, I’m just telling you what I believe in--where I’ve seen growth, where I’ve seen commercial value benefit the sport and the athletes.

I haven’t seen anything yet that would argue against central entity sponsorship and athlete management in the UFC. I’m not saying we have to do it; I’m saying there’s more value in packaging.

Do Dana White and the Fertittas agree?
They argue it back the same way you have! I think the great thing about this business is we can control our destiny. We also have our fighters’ interests at heart.

To help explain what people in senior roles such as yourself do on a daily basis, can you tell us what did on your first day of the job at the UFC?
When I walked in we had built a team of people who were wholly responsible for executing international events around the world. My first day here, I was sitting on my own because everyone was in Macau!

How long did you sit alone at your desk?
[Laughs] The tumbleweed went past, then I decided it might be time to go and get a sandwich. When I got back I started asking questions.

I've introduced [the idea of] “think globally, but act locally.” Mike Goldberg and Joe Rogan commentating is good, but wouldn’t it be great to have a European commentary team? What about a Beyond the Octagon show not only in the UK, but also in Poland, Sweden … talking about their stories, so their networks have a different approach? Wouldn’t it be fantastic if, the day before an event, you play the UFC video game in an arena for a virtual world title? Wouldn’t it be great if you had a UFC fitness challenge? We hope to open a UFC gym chain in Europe from November 2014.

I want to make sure the fans are engaging with the sport and brand on multiple levels, multiple times.

How do you solve the problem of the sport being considered too brutal?
There are elements, aesthetically, we maybe don’t feel comfortable with, but ask a fighter if it’s brutal. You won’t find many fighters who say MMA’s brutal. Here’s an interesting context: if you ask Brad Pickett if he’s ever been in a fight outside the Octagon, he’ll say, “Never in my life.”

That’s very selective. Jimi Manuwa has ...
Of course, but the essence of it is: This is an elite performance sport that is more strategic than it was in its early days. A cut to a fighter is part and parcel of being a fighter.

Bantamweight champion Dominick Cruz told Fightland he was more scared of the needle needed to give him stitches than the fight that caused the cut.
That’s a great use of a story to depict what the truth is. Here’s what I find: There is no answer to whether MMA’s brutal or not, because it’s subjective. The dichotomy of interest is intriguing and understandable.

What was your first impression when you first saw MMA live?
It was the most authentic sport I think I’d ever seen. I looked at it and thought, ‘That’s real. There is no smoke and mirrors.”

How did your time at Manchester City change you and the way you work?
My experience at Manchester City was both personally and professionally gratifying and hurtful. It cost me my marriage; my children have moved back to America. I worked 24 hours a day, seven days a week, and there have been errors in judgment that I have to live with.

I learned the good, the bad, and the ugly of football that I'll put down to great experience.

And write a book about it?
I've been asked that a lot times! I think readers like a bit of scandal.

A Local Takes in the UFC in London