Fightland Meets: The Australian Behind the Rise of Texas MMA 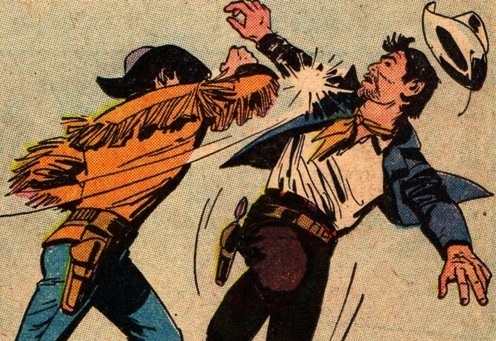 The man who edged out a decision victory over Mick Maynard at an amateur Muay Thai event last month in Des Moines, Iowa, likely had no idea he'd just beaten one of the most powerful men in MMA. Though it was the Legacy Fighting Championship founder's first fight in seven years, he was able to employ his game plan early on. He stayed on the outside and gave the guy a steady dose of leg kicks. But during the second round his opponent closed the gap and initiated the clinch again and again, frustrating Maynard.

"His corner must have given him great advice. He made it ugly," Maynard says. At 42, the CEO somehow makes time every day to train and spar with fighters from the Legacy FC roster. Amazingly, the hardest punch the light heavyweight has taken of late came from Domingo Pilarte, a 135 pounder. "It was a straight left. I was in shock. He didn't drop me though. I've never been knocked out," Maynard says with a grin and knocks on his desk.

Legacy is headquartered in an office building in far northwest Houston. There are a handful of employees outside Maynard's office working in cubicles. The walls are decorated with black-and-white stills of Legacy fights. It's an impressive display considering Legacy was started only six years ago with relatively no money.

Maynard came to Texas from his hometown of Sydney, Australia, at age 23 to be a hippie. His plan was to work and save a little money before driving down to South America in a "Scooby-Doo van" to explore the culture and learn Spanish. He got a job in the advertising department of the Houston Press, where he met his future wife, Andrea. She soon became pregnant, and Maynard let go of his wanderlust in favor of raising a family. But he found adjustment difficult the first few years, and Houston was a big culture shock.

“I can’t honestly say I liked it very much,” Maynard says. “People are definitely very friendly in Houston, almost to the point of being in your business.”

After getting a feel for the print industry, Mick and Andrea decided to start their own newspaper, but they knew they couldn't compete with Houston's established publications. They instead targeted the student market 90 miles northeast in College Station, home of Texas A&M, Andrea's alma mater. Maynard looked for a novel way to promote Maroon Weekly to the young college demographic. He decided on MMA.

"Martials arts was something I understood." Maynard says. He sought out local MMA promotions to get involved but never got any responses, "So I just did it myself," he says. He called his first event the Lonestar Beatdown, a play on the sacred Lonestar Showdown, the annual football game between the Texas Longhorns and Texas A&M Aggies. The concept was to bring fighters from Austin to face the local east Texas boys, but no Austin fighters were willing to make the trip. "Austin is a terrible fight town," Maynard says. Hurricane Harry's, a huge country bar and dancehall, was the only place that would have them. There were no cages to rent in the area so Maynard had to have one brought in from Louisiana.

"They showed up really late, at three or four am the day of the fights,” Maynard says. “They were acting erratically. I think they were meth addicts." The rickety cage was a 16x16 square, and the door was held shut by the metal clip of a dog leash. Fighters wanting to employ an evasive Lyoto Machida-like strategy were shit out of luck.

"It was very raw,” Maynard says. “I just remember people smoking cigarettes around the cage, and actually blowing smoke into the cage." Despite the Roadhouse feel, Lonestar Beatdown 1 was a success, with nearly 1500 people piling into the bar to watch. The newspaper industry was dying, and the UFC was experiencing a meteoric rise in popularity, so Maynard sold Maroon Weekly and focused on growing his promotion.

Texas MMA was in its infant stage at the time, and putting together high-level fights was a challenge. There were few MMA gyms in the state and no amateur programs, so fighters who wanted to compete had to go pro immediately, often well before they were ready. But Maynard saw potential waiting to be developed in his adopted home state. The NFL is full of Texans, and San Antonio has long been a hotbed of boxing talent.

Lonestar Beatdown's fanbase gradually but steadily expanded, but there were brushes with disaster that nearly halted the young promotion's momentum. In 2009, in an effort to "attract the UFC crowd," they held an event at the House of Blues in the middle of downtown Houston's financial district. After a controversial decision, a drunk fan in the balcony threw a beer bottle into the cage. Also watching from the balcony was a family member of the winner. Soon a fight had broken out.

"It just went berserk ... people nearly fell off the balcony," Maynard remembers. Unsure of how to get up to the balcony, he began shouting from the ground floor for people to calm down. Then he saw something that sent him into a panic. It was his wife in the middle of it all, trying to break up the fight.

People were arrested, and in the fallout from the brawl the promotion lost several sponsors, but Maynard knew it could've been much worse. "There were some people who got hurt, but hurt in that they got into a fight, ya know?” he says. “Luckily, there was nothing bad, but there could've been. It was a scary deal."

Later that year, Maynard decided to change the name of his promotion from Lonestar Beatdown to Legacy Fighting Championship to appeal to a national audience. The fight cards are still full of Texans, but Maynard no longer sees his company as just a regional promotion.

"People say, 'So many of your fighters are from Texas.' Well, why wouldn't they be?” he says. “We have an immense amount of talent in Houston, Dallas, San Antonio, all over Texas so why would I step over a Texas town to get someone from Pennsylvania? I'm not going to overlook some incredible talent in Texas because they're calling us ‘local.’ That would just be goofy."

Six years after that first smoky event at Hurricane's Harry's, Legacy has become a top-rate minor-league promotion, with many of its best fighters eventually making it to the UFC. A couple of weeks ago at UFC 162, former Legacy middleweight champ Andrew Craig defeated veteran Chris Leben and former Legacy welterweight Brian Melancon earned a knockout victory in his UFC debut. And UFC lightweight veteran Jamie Varner was mere weeks away from his Legacy debut when he got the call to fight at UFC 146 last May, where he beat Edson Barboza in an underdog-redemption story to beat all underdog-redemption stories. All of which means the arrival of the UFC in Houston this coming October for Velasquez-Dos Santos 3 has Maynard fantasizing about a Legacy vs. UFC card.

"I think my guys would do awesome," he says.

These days Maynard says he makes occasional trips back to Sydney to see friends and family, but after a few days he's usually anxious to return to Texas. He no longer wants to be in a Mystery Machine somewhere in Peru, smoking hash in the mountains above the clouds.  Houston is his home now.

Heroes and Villains in Texas