Fightland Talks To: A First-Time Referee 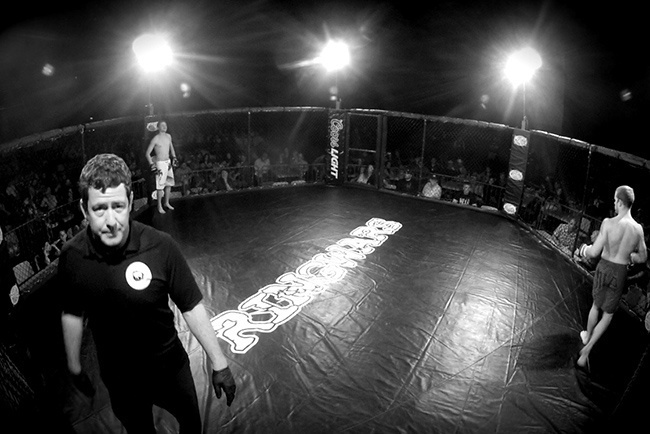 Two weeks ago, on his 40th birthday, New Mexican-born martial arts instructor Larry King (no relation) traveled to Gilette, Wyoming, to referee his first MMA event. Larry is a black belt Brazilian jiu-jitsu instructor, and is opening a school in Seattle called Praxis, but he decided the latest Ring Wars event would be the perfect time to finally get inside a cage. The Monday after the fights, we visited with King to hear how it all went down.

Fightland: What was the motivation behind becoming a ref?
Larry King: I know intimately what is going to hurt and not hurt people. But at the jiu-jitsu academy, my goal is making sure nobody gets close to that border. In a fight, it’s different. If you don’t tap to the arm bar, I have to make sure that arm gets really, really, really close to breaking before I stop the fight. In the academy we stop well before you get beat up.

I don’t really want to get into any more fights in my life. I’m not a fighter. That’s not my thing. I don’t fight in the street, and I think it's ridiculous when people do. But I’m still giving people instruction and advice on how to conduct themselves in a fight. So for me, there’s an appeal to being that close to a fight that’s happening and having to be focused and precise. I had to overcome some of the same emotions that the fighters do.

So how did it go?
The energy of the fighters was incredible. It was a super fun experience for me because the guys would step into the cage and immediately you could feel this serious tone throughout the whole building--We are going to have a fight here--and you could see it their eyes. They were all ready to go to war, and you could really see who was maybe a little nervous or who was overconfident.

It unfolds so fast. The fighters are about to find out if they got asked to prom right then and there. It’s such an honest sport because of that. You can’t hide from what you can and can’t do. You can’t get away from it. Every one of those fighters got some very real data on how they perform as an athlete that night.

I had a hard time not smiling while I was reffing because it was so enjoyable watching people who have worked so hard for something finally have their night. It’s difficult to not be compelled. I loved the struggle and the contest.

What was the most challenging part?
I had to differentiate between being a spectator and being an odd third-party participant. I had to kind of change my perspective of what a fight was. When I watch a fight for enjoyment, I pick a favorite and make judgments about their strategy. As a ref, I had to be completely objective. It was like calmly watching a train wreck as it happens and then yanking the people out at the last minute.

Referees seem to be measured by their timing. Do you think you did a good job?
I thought about this a lot before the event: At what point do I decide that you have had too much? That’s the humanity in the cage. When you’re fighting, you’re not in a safe state of mind. You are in a state of mind that [says], “It’s me or this dude.” You can’t just come out of that. It takes a second. That’s why there has to be a third person in the cage.

Both fighters want to wage war, and they will, but only enough to the point where no one is injured permanently or to the point where someone knows they lost, whichever comes first. Unfortunately, most of the fighters in the cage with me that night would never consciously concede, even after an amount of beating nobody would be allowed to take in a healthy, well-regulated sport. So the TKO is that moment where I decide for both of them.

Some advice I got beforehand was to let the fight happen organically. To not be too involved: Let the winner win, let the loser lose, and stop it right in that key moment before anybody gets hurt.

You had a controversial stoppage--a flash knockout during the main event. People were upset. What was it like to have people turn on you?
I gotta say, that was my favorite part of the night. When I talk about the emotion of it all? It was great and I wanted to smile throughout the whole situation. It was apparent to me that the guy that lost was out. He had no defensive posture whatsoever. He had this look of surprise on his face.

Fortunately, the doc was there, and she entered the cage right away and told me that she agreed with me. That was comforting. I really wanted to make the right call. It’s a huge deal to the fighters. It was a pro fight and both careers are important to me. I am not just there to ensure a fair win but also to ensure that the loser does not take unnecessary punishment. Second-strike syndrome is scary.

Would you do it again?
Oh, absolutely. 100 percent. Best birthday ever.