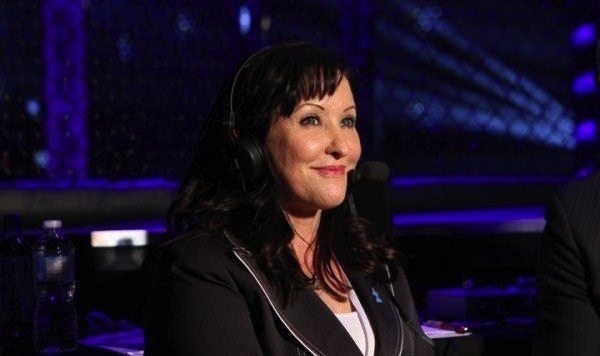 Invicta Fighting Championship President Shannon Knapp has worked in MMA for over a decade. She’s been a broadcaster, a matchmaker, and an executive. She’s worked for the IFL and Strikeforce. A little over a year ago, when the female fighters in Strikeforce found out that their promotion was being dissolved with no female division in sight at the UFC, it was Shannon they looked to in a panic. Her answer was to build Invicta. A little over a year and five events later Invicta held the first-ever all female card pay-per-view card Saturday July 13 at the Ameristar Casino in Kansas City.

I was supposed to be shadowing Shannon during weigh-ins and on fight night, but it was not to be. I spoke with her for a few moments before her fighters started weighing in, but I obviously wasn’t invited to stand with her onstage with the live stream rolling. She was talking to me but only looking at me for split seconds in between long sweeps over the room, overseeing the procession of her sixth and biggest event. Shannon is a tiny thing, five foot three if I had to guess, and the classic combination of pretty and professional you’ll find in female executive types. But with that comes a sternness that is palpable while she’s working. If I were twice my size and three times my fierceness, I would still be loath to piss her off. Needless to say, when Austrian flyweight Livia Von Plattenberg weighed in eight pounds over for her fight, I did not envy her the look on Shannon’s face and the ferocious chewing out I expected would follow.

Things didn’t improve Saturday. Early fight night was one mess after another. Tamika Brents had stepped in as a last-minute replacement to fight Ediane Gomes when her original opponent’s visa into the country couldn’t be arranged. But less than an hour before that fight was to happen, Tamika went down hard on her knee while warming up and the swelling couldn’t be contained. The fight was cancelled. That made two out of four prelim fights that wouldn’t be happening, a situation that left Shannon and Janet Martin, Shannon’s partner and Invicta’s matchmaker, scrambling to fill up the time. They brought commentator/fighter Julie Kedzie backstage to conduct interviews on the fly and prayed people wouldn’t lose interest before the main card started. Fortunately for them, and for all of us who so dearly hope for Invicta to succeed, the main card was a huge success, capped off by Cris Cyborg’s dominating win over Marloes Coenen.

All of which is to say I didn’t really get the access I was hoping for, but I got a chance to catch up with Shannon on the phone last week to ask her about fight night, her beginnings, and the phenomenon that is Cyborg.

Fightland: Five years ago, would have you have imagined this is what you would be doing?
Shannon Knapp: No, absolutely not. Five years ago I was still working in men’s MMA. And it was such a battle always [for women] to be accepted in a mainstream sports kind of way. I was pretty protective of them. Five years ago when I would want to take a spot from one of the male athletes for a female fight the answer was always, “Oh no you’re not.” As a matchmaker, it wasn’t about finding the best fight out there between women that you could possibly put on; I was more or less told, “Find two hot chicks,” which inevitably resulted in disappointing fights. So I didn’t have a healthy respect for women’s MMA. But when I went to work for Strikeforce, I witnessed such amazing athletes--Gina Carano, Cris Cyborg, Marloes Coenen--I was like, wow. There really are women out there that train hard, fight hard, are talented, are above and beyond anything I could have imagined, which is something I’d not seen before because of all the terrible mismatches that were put on by promotions before Strikeforce. So yeah, I never thought that I’d be doing what I’m doing now.

I felt the same way until I saw the Sarah Kaufman/Alexis Davis fight. It changed my entire perspective of what a women’s fight could be.
Yeah, there really is greatness. And it’s a travesty that this greatness has never really been tended to, to help it grow and shine. That is truly why I got into the sport. I’m a huge advocate for the athletes and the sport itself. I always thought that maybe I could come in and make a difference, so this has been a dream come true for me to actually visually see the difference. I wanted to build a huge sports franchise for the female athletes. If we can have anywhere near the growth that [the UFC] has had, it will be great for them.

One of the things coming up in this business that was instrumental to me making the decision to do this for the female athletes, to try to provide this opportunity, was that if anyone knew what the struggles were for them, not inside the cage but the outside just trying to navigate in a man’s sport, a man’s world, it was me. There were times that I had six jobs just to make an honest living. So, I knew how to fight that fight. I knew that if the female athletes could change my mind, as old school as I am, I could help them. I had the tools to help them change other people’s minds, too.

How did you get into fights?
Honestly I was always kind of different. I guess the best way to explain it is that I was always a girly girl. If you looked in my closet you’d see all my clothes, hair stuff, make-up, all that stuff. But I had this other side. I rode motorcycles. I wanted to be a ninja. Girls around me wanted to be models and teachers, and I would try to convince my mom to send me to the ninja camps in the back of Soldier of Fortune magazine. At 14 I had a 1200 Harley Davidson. I couldn’t have the Sportster; I had to have the big-boy hog. I worked on it; I lowered the seat and the swingarms. I did things that average girls didn’t do. I remember lying in bed and thinking about, “Okay, if I hit someone like this, he’ll react like this, and then I’ll counter with this.” But I really was girly. Hard to explain. Kind of a strange combination. I just was always drawn to fights.

I’ve had a good life in this sport, it’s been a real joy. Plus, I can show my 19-year-old daughter that you really can do anything you want to do. It doesn’t matter that the mold says this is the way it is supposed to work; sometimes you just need to make a new mold. It’s been one of the most gratifying things to be able to show her that. I walked out of that divorce with her, a car, and $100 in my pocket. And this is where I’ve come. From there I have survived on my own in the right way. I don’t ask people for stuff.

Does your daughter like the fights?
She loves Invicta. When she was young I kept her separate from the sport because there’s a lot of crazy stuff that goes on. And this was my life choice and not hers. I didn’t want to influence her in that sense. I knew I couldn’t do my job efficiently if she was at the events because I would have been concerned about her. Invicta is not only something that’s exciting in my career; it’s exciting to be able to be home--to actually have a home and a normal life. Adjusting is hard, though. It’s been hard for me not traveling like I had been for years and years. I was always pretty much alone. I would stay in hotels, go meet with the athletes, form relationships with them, but I was on my own. And now I have to figure out how to live a normal life. Because now I have time. I can plan what I’m doing.