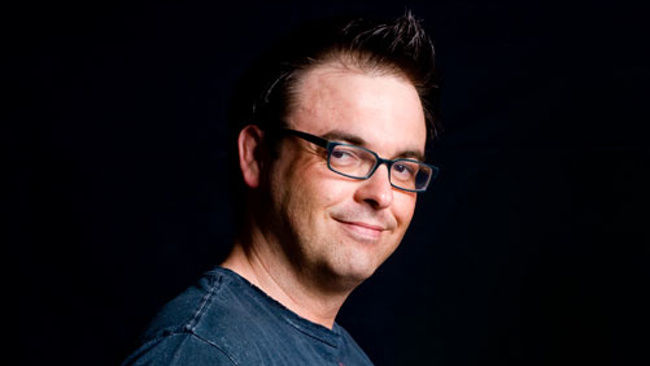 Mauro Ranallo is the voice of MMA for Showtime and, perhaps, one of the greatest announcers in the history of fighting. Fightland caught up with Mauro “The Bipolar Rock-n-Roller,” to talk about the fighting scene from inside out, and what it's like to be on the production side of combat sports.

Fightland: How did you start commentating?
Mauro Ranallo: It goes back to when I was 4-5 years old. I’d be pretending to interview toys in a bathtub with toilette paper. I’ve always had a fertile imagination but I was always interested in news, current events, and reading out loud at a very young age. I’ve always wanted to know people’s stories. I’ve just had a very veracious appetite for knowledge of all kinds, maybe thanks to my Bipolar Rock-N-Roller persona, obsessive-compulsive disorder. You’re either going to get better or you are going to suffer vitally. I was very fortunate to know what I was meant to do at a very young age. I don’t know if I’ve mastered it, but I had had tons of practice.

You have once said that you would have loved to be a fighter. Would you rather be inside or outside a ring?
There is no doubt I have chosen the right path. I was a high school wrestler from grade 10 to 12, but I was mediocre at best. I knew when I was five years old that I wanted to entertain and be a broadcaster. I guess I had an early sense I wasn’t going to be the most athletic guy and, at the end of the day, being a commentator is a much easier job. I think one of the reasons why I’m such a big fan of combat sports is because not everyone can do that. Everyone can pick up a stick and hit a puck, everyone can try and hit a baseball, or bounce a basketball, but it takes a really special breed to actually get into a ring. It is an area of truth, and the truth really exposes who you are. That’s why it’s so appealing to me. It’s the purest form of competition. For me, [the sport] is very mental, very cerebral. That’s what really keeps me on my toes, it’s just learning more about the mental aspect of fighting and presenting it as such. It really is a science and an art, and I’m just really fortunate to be a small part of it. 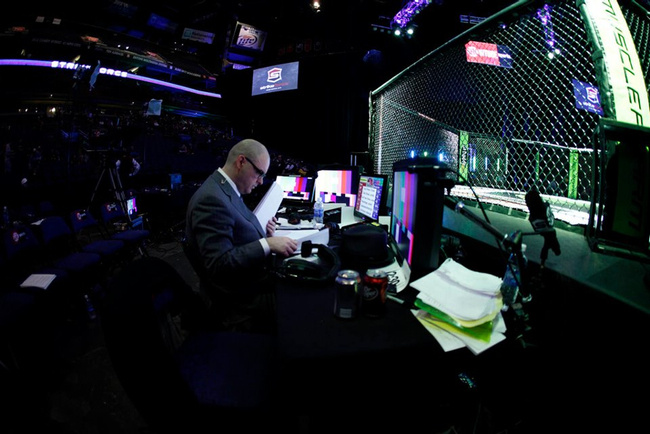 Do you have any favorite fighters?
Of course I have favorite. But, when you are calling a fight, you have to be 100% neutral. I didn’t fight professionally, thus I have no right to openly criticize. I tell the story of the fight, the highs and lows, and then it’s up to the analyst like Paulie Malignaggi to criticize. I have respect for every man or woman who comes into a ring under any discipline for the fighting arts. I’m just the soundtrack.

How do you usually prepare for a fight night?
I love research and I love learning about people’s stories, whether it be in the fight game or in all walks of life. I’ve always had a really intense curiosity about people, so when it comes to preparation for a fight night, it’s really just a labor of love. I gather all kinds of information whether it’s online, or through other written materials, or talking to the athletes themselves. I love watching old tape. I make notes about fighters’ personalities, about their background, their family life, where they come from. It’s all about story telling. In terms of what play-by-play is, we can only react to what happens, there’s no way to prepare for that. In order to do so, you need to know those individuals and what makes them interesting. I’m narrating the story of their fights and their lives. That’s how I look at it.

You’ve been commentating boxing, and pro, but what part does MMA play in your life?
MMA was my biggest introduction to combat sports. I started commentating and announcing when I was 16 years old while working as a radio DJ and a club DJ. I announced hockey, football, basketball, lacrosse, any sport you name it. I’ve done literally everything in the 30 years I’ve been involved with the work I do. MMA was my biggest claim to fame because I was indoctrinated and baptized in the biggest event in the world, Pride Fighting Championships, after Bas Rutten discovered me in Vancouver at a grappling event. He and I worked together on another project then. Bas was my pipeline into Pride. So MMA will always be a big part of who I am, and not to say that I now transitioned to boxing full-time since 2013. I still did Invicta Women’s MMA, I still follow the sport very closely, and hopefully one day I’ll be doing more announcement in MMA. 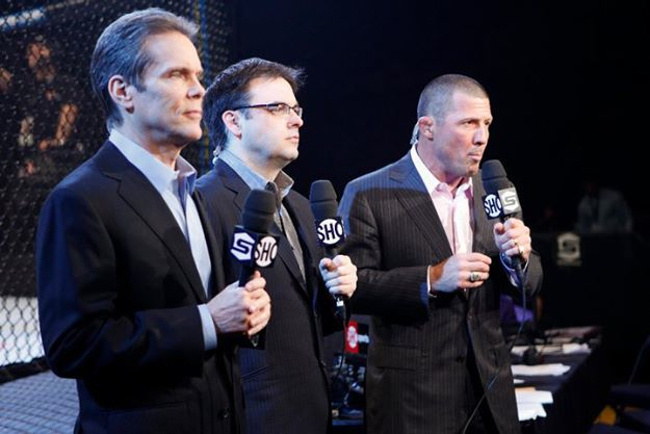 What are the best moments of your career?
The best has just happened in September of 2013, when I was a play-by-play announcer on Showtime pay-per-view for Floyd Mayweather vs Canelo Alvarez. I ended up the second in ratings play-by-play, and most lucrative boxing match in terms of revenues. That was without a doubt the biggest highlight of my career so far. But, of course, looking back at all the memorable fights in Pride FC like when Fedor Emelianeko fought Mirko “Cro Cop.” At that time it was the most anticipated fight in MMA history. Or, the very first show I did at Bushido One with five members of the Gracie family competing for the first time together. The Shockwave event, the amazing production values in Pride, great culture and the people that are the Japanese, I was always treated amazingly well there.

I have so many fun memories of Japan. In pro-wrestling, it’s working with the Hart family. Stampede wrestling, which meant everything to me as a kid growing up, as a huge fan of their professional wrestling under the legendary Stu Hart and producing guys like Bret Hart, the Dynamite Kid, Bad News Allen, Smith, Jim Wright and it goes and on. The amazing talent I came on in Calgary. So for me being an announcer was like a Forrest Gump type of career. I hate to say that, I’m bragging, but yet there were dark moments in terms of my life and health but in terms of my career I’ve been so blessed and all of it is a huge highlight. I just can’t believe I’ve been a part of it all. It’s truly a blessing.

What about the worst moments?
The first Pride event in Las Vegas when Fedor Emelianenko fought Mark Coleman in a rematch. Fedor defeated Coleman and submitted him. Coleman, a heavyweight champion, brought his young daughters into the ring. [He was pretty beat up] and it wasvery uncomfortable to watch. Mark later said that he regretted bringing them in, but maybe Pride wanted further dramatic purpose and make for dramatic, compelling TV. The two girls sitting there, crying, looking at their dad’s beaten up face. For me that was one of the grunge moments I was a part of.

Then, there was also the brawl in Nashville between Strikeforce and members of the Cesar Gracie team, and Jason Miller when he interjected himself during Jake Shields’ interview. Stuff like that doesn’t sit well.

What happened to Pride Fighting Championships?
They hired Mauro Ranallo: The Promotional Killer! I laugh, but it hurts. It’s funny you ask. The amount of affection and love that Pride Championships has, to this day, is amazing. That says everything. I left the promotion almost 8 years ago. Pride had a lot of the money from Fuji TV.  It was an incredible amount, like five million dollars for every production of a show. It was the most amazing thing I’ve ever seen in my life. It was a cross between a Super Bowl, a rock concert, and a Broadway play. It was amazing what Pride Championships presented to its audience. At the time, they had the best roster of international fighters. But, it was all happening under the cloud of Japanese organized crime, called the Yakuza. There have been a series of articles written in the Japanese press about the Yakuza influencing the events, and Fuji TV eventually pulled its money, and that was the beginning of its end.

The fighters from Russia’s North Caucasus region have made lots of buzz in UFC recently.  Anyone, in particular, you can name that caught your eye?
I’m impressed with Khabib Nurmagomedov. I know that it’s very hard for Dana White to find good fighters for him to face. There are also other Russian fighters like Alexander Volkov and Alexander Shlemenko in Bellator. I’ve noticed that UFC brings more Russian fighters and it’s good for the sport. It’s good [for the overall mixed martial arts] profile in Russia and Europe. You’ve got Alexander Gustafsson in Sweden, breakaway starConor McGregor in Ireland. Again going back to marketing, you want to have the draw whether it’s in pro-wrestling or not, they are always trying to come with a character who will lend itself to the demographic of the day. Bruno Sammartino is very popular with the Italians, Pedro Morales with Puerto Ricans, Ivan Koloff with the Russians. That’s the old school thinking that still works today. 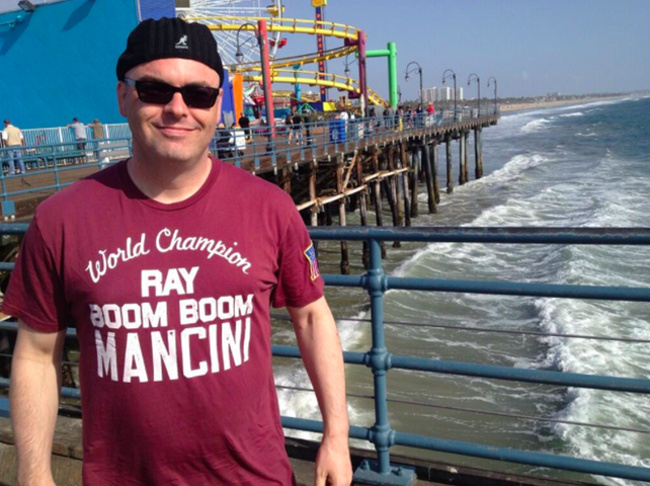 Your nickname is a reference to the fact that you are diagnosed with bipolar disorder, which you have been very open about.
The nickname came about when I was working in radio. Unfortunately, I can’t remember who was the first guy who called me that. It’s funny because it’s a goofy nickname but I use it. People might joke about it in a conversation but I have no problems talking about my mental health issues because more people need to know and talk. I was diagnosed when I was 19.

I hope that this year I’m going to become more involved [in mental issue awareness]. I want to do more media-wise. Right now I talk about it on Twitter, other social networks, and people email me. I’m very open that way. When I have time, I try to respond to every message I get. Maybe I can lead people in the right direction or just share with you a few words about my story and hope that I can help you.

I have had a lot of very dark days. But I’m proving to everyone, I hope, who have similar circumstances in their lives, that you should never give up, you should never surrender, know that there’s help out there. Just to keep up the good fight because here I am at the age of 44 and it’s a constant struggle for me on daily basis, no matter how much I love what I do. I just want to show people that you can function and have a good life.

Fightland Talks To: The Photographer Who Braved Mike Tyson and His Tigers