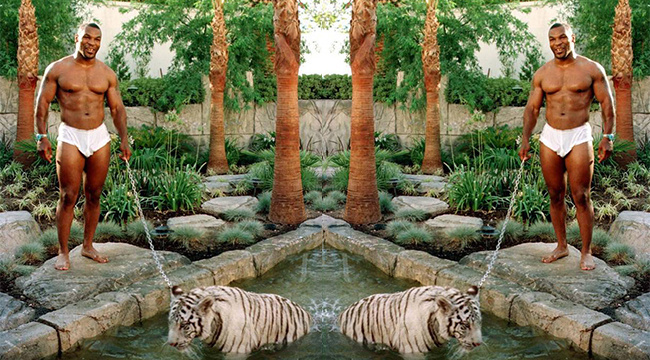 Chris Farina has been the official photographer for boxing promotion Top Rank for 25 years. He also photographs entertainers—especially at red carpet events like the Oscars—huge conventions, and NASCAR races. Farina goes all over the world for Top Rank and has complete access to fighters, from the gym to the ring.

Fightland talked to him about the art of photographing fights (it requires the ability to see into the future) and the terror of hanging out with Mike Tyson.

Fightland: How did you get into shooting boxing?
Chris Farina: I was a professional musician before photography. I worked in Las Vegas with my brothers. But I was always shooting pictures when I was playing. My dad actually got me into taking pictures at fights. He was a radio/TV personality and he would cover boxing. So he’d say, “Wanna come to the fights?” And I’d drag myself along.

How do you know what to look for when you're shooting in the middle of a fight?
You have to study the fighter. You have to study him and his action and movements. You have to understand: Where is he going in this fight, where is he moving to, what is he trying to accomplish? For me, it’s like, “How far is he gonna take this? How much time do I have, and where’s this fighter going?” It’s what I call the psychological part of shooting. Sports photography is always anticipating. There’s a delay. So you’re taking the photo before the action happens.

The greatest shot of all time has already been taken. We’re all just trying to match it. Rocky Marciano crushing Jersey Joe Walcott in the 13th round. A lot of us think that’s the best shot ever. We strive to get to that shot. 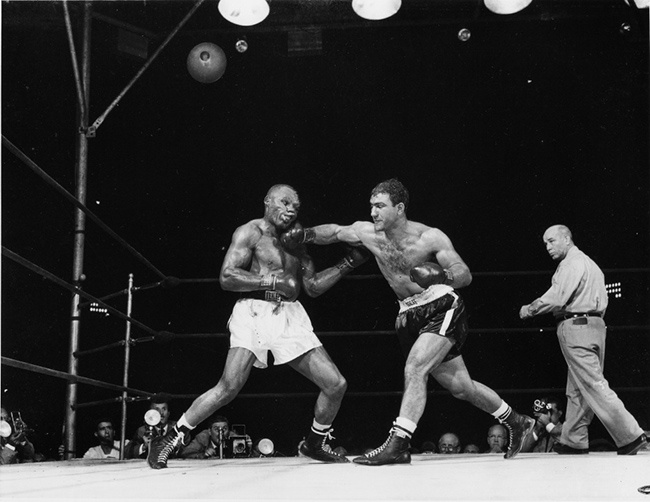 What's are some of your favorite photos?
That one of Carlos Hernandez. That won me feature photo of the year in the Boxing Writers Association of America. I like that one because he won the fight. I only had about a split second to take that shot because his corner man, as you can see, is coming into the ring and will block him and towel him off. It kind of says “boxing,” doesn’t it? 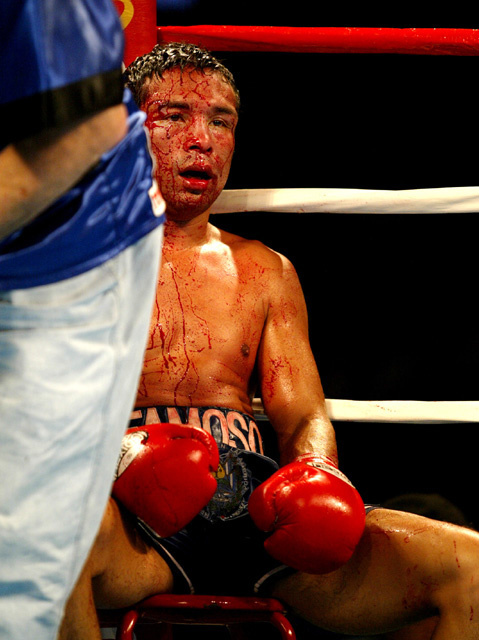 The Yankee Stadium photo—nobody has this angle. I was the only one who was allowed to hang a camera at that angle. I like what you can see from there. It’s rare that fights are even in Yankee Stadium. 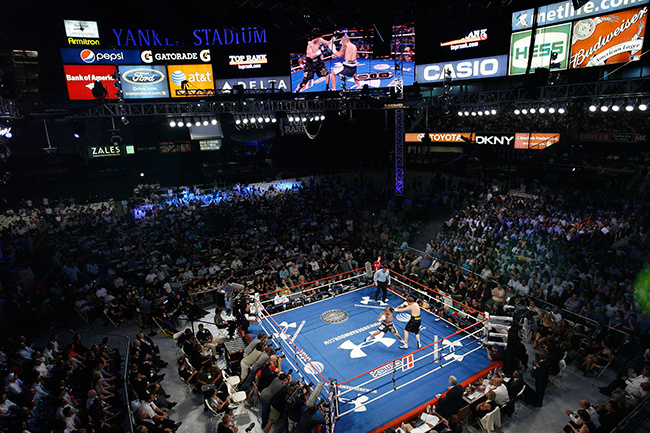 What's one of the craziest things you've ever witnessed while taking pictures at fights?
Well, this wasn’t during a fight, but it was with Mike Tyson. Ring magazine set up this exclusive interview. After Tyson got out of jail, we wanted to go to his house in Vegas to do this interview. We spent two days at his house, just me, my assistant, and the editor and vice president of the magazine.

Mike shows us around the house, and he eventually says, “You wanna see the tigers?” We say, “Sure.” He takes us out back.

There were two lions and a tiger or two tigers and a lion—definitely three of them. He gets in the cage, and he’s playing with this Bengal tiger. This thing is about to eat him, but I guess he knew this thing from when he was a baby. So he puts this chain on the tiger’s neck. The chain had to be the size of my arm. Huge links. He pulls the tiger out of the cage, and I’m moving back. He says, “This is the nice one.” He starts walking with this tiger up the hill, and I’m shooting all these pictures. The tiger is dragging Mike. He doesn’t have the tiger, the tiger is dragging him.

I have one of the old film cameras and it’s going scrrrrrckkt scrrrrrrckkkt, and every time I do that the tiger looks at me and is going raaaahrrrrrr. I’m going, “Mike, keep that thing away from me!” And he goes, “This is a man-eating beast.” I go, “I know! It’s going to eat us and no one will know we were even here.”

He has no control over this beast. He’s laughing his head off while this thing is dragging him. I’m thinking, “Nobody knows we’re here, the tiger could eat all of us, and no one would ever know that.” 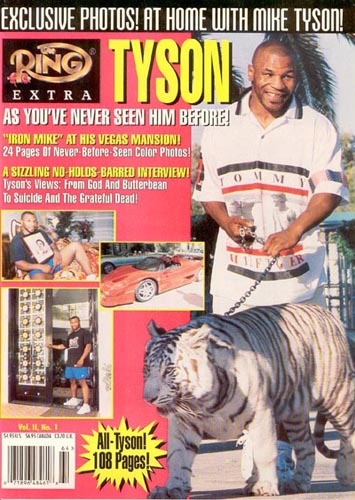 Have you ever gotten so emotional during a fight that you had trouble continuing to shoot?
Oh yeah. I’ve seen guys die in the ring. It’s always, when a fighter goes down, you just lose it, you know? When I was younger, I saw Duk Koo Kim. Because of him, they changed from 15 rounds to 12 rounds. He’s fighting Ray Mancini. I was shooting from the stands, and this guy kept coming out every round, just taking a beating, and his corner kept pushing him out there. I was just starting in boxing, not much experience, but I knew that this poor kid was getting beat.

They took him out on a stretcher. They walk him right by me. I took pictures sparingly. I knew it was historic. I never want to take those pictures. But as a journalist, you have to. I felt so bad for this kid. He came over here from Korea, and he’d never go home.

Visions of Tristar: the Gang's All Here

The View From Albuquerque: The Rock House