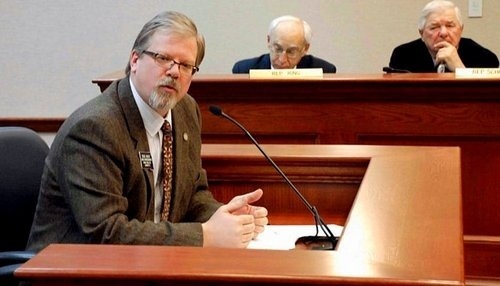 Currently South Dakota is one of only a handful of states that doesn't regulate MMA. But unlike New York and Connecticut, both of which have banned the sport outright, South Dakota simply doesn't have an athletic commission to oversee things, which means fights go on but MMA fighters and promotions are pretty much out there on their own, health- and safety-wise

Well, the South Dakota State House of Representatives recently started debate on a State Senate bill that would change all that -- by creating a state athletic commission to regulate boxing, wrestling, and mixed martial arts. Yesterday the House Commerce and Energy Committee voted unanimously to approve the measure and send it on to the full House, but not before Republican Representative Steve Hickey attempted to amend the bill by deleting MMA from the language. Regulating boxing and wrestling is fine, Hickey said, but sanctioned MMA in the Mount Rushmore State would be a bridge too far, morally speaking. In a blog post published Saturday, Hickey, a right-wing Republican and ordained minster at the Church of the Gate in Sioux Falls, called for a ban of the sport and compared it to child porn, meth, and feeding people to lions. "South Dakota has no business spending any time time or money legitimizing cage fighting," Hickey wrote. "It is violent and it isn't a sign of a healthy society that crowds gather to watch it. This is more than consensual assault and battery as the effects of violence desensitization impact the rest of society."

Before the full South Dakota House takes up the bill Wednesday, we decided to give Hickey a call and find out what all the fuss is about.

Fightland: What did you mean when you wrote that MMA is the "child porn of sports"?
Steve Hickey: It’s a pure analogy and I’m making the point that in many other things we draw lines. With parenting we draw a line with how can discipline our kids. You can’t smack them in the face or hit them with an instrument. We have lines in society. We have limitations on speeding. In adult entertainment we have a line that we draw. And in violent entertainment – which is what mixed martial arts is -- where’s the line? There isn’t a line. You can break a guys arm and leg, and unless you tap it’s allowed. And the fans cheer. It’s a billion–dollar industry and it’s about money in our state. They’re saying if we regulate it, it will make it safer. But it’s about bringing in money. My amendment would basically ban cagefighting in South Dakota.

Why draw the line at MMA but allow boxing? Boxing is obviously violent and has resulted in numerous deaths and hundreds of cases of long-term mental damage.
I think that boxing has had a longstanding tolerance in our society, and mixed martial arts, even visually to the casual observer, is beyond what I call it the “wince factor.”  We each have a conscience, and unless it’s seared we still have the capacity to wince. And when society loses the capacity to wince at violence I think we’re going backwards instead of forwards.  A casual observer looks at a screen and they’re not used to seeing mixed martial arts because it’s like, “When did we start doing that?”

I agree, boxing, wrestling, these are all contact and combative sports, but somewhere, at some point, we need to draw the line. We’ve got bullying going on in schools and yet we’re inviting in the fastest-growing sport in the world, which is violent. The point of it is to beat the other guy until he says, “Enough.”

Couldn’t the argument go the other way, that the discipline and hard-working and skills taught in MMA could potentially decrease bullying and general moral decay?
I don’t think you need the level of violence of mixed martial arts to accomplish the good that you’re talking about: the discipline, the confidence, the self-assurance. All the good things that are in mixed martial arts can be accomplished in a variety of other sports that at the present time are tolerable.

I’m trying to create a reduction of violence in society. And I do agree that a boxing commissioner is important. But at some point you have to say, “Let’s have this, and not that.”

In your blog post, you wrote that the “NFL is paying dearly for their concussion issues.” So why not ban the NFL?
The NFL has a longstanding history of something we tolerate. They’re doing major backpedaling to reduce injuries that are resulting in suicides and the long-term effects on these athletes. And the jury is still our on mixed martial arts. The NFL is addressing their concussion issues and they’re backpedaling. With MMA, this is the fastest-growing thing in the world and we’re accelerating it without data. With one sport we’re saying we’ve really got to address the violence in this sport – and they’re doing that – and with the other sport, we’re saying, “Hey let’s expand this in our states.”

And it’s for crowds. It is for entertainment. It used to be The Three Stooges were too violent for moms to let their kids watch 40 years ago: the poking and the ear-pulling and the bonking and the twisting of the nose. Today, look at what we see on television. It’s violent entertainment. How did we get to where we are today? It’s because somebody never stood up and said, “We gotta draw a line.” The nature of violence is: People are hungry for more. It’ s never enough, it’s gotta be worse, it escalates, it’s addictive. Psychologists know this extensively. There’s a fascination with it. There’s the rubberneck syndrome when there’s a wreck or a fight. Human nature is attracted to this thing. And I just think with what’s going on in the world today with violence, we need to start saying, “Hey, let’s focus our energies on something else.”

You voted for a law that authorized school boards to allow armed personnel on campuses and another authorizing the concealed carry of a handgun without a permit. You talk about people’s escalating desires – for porn, for violence. Are you ever concerned that a person who has a pistol will eventually feel the need to buy bigger and bigger guns, that after going to gun ranges they’ll want more, that people who shoot guns will get inured to shooting and blowing things up the same way they might get inured to the violence in mixed martial arts?
No. You’re talking to a South Dakota legislator. We are gun people in our state. There’s no escalation: “This gun isn’t big enough; let’s buy a bigger gun.” What we’re seeing going on in America is mental illness issues, a greater tolerance of gun violence in society, no mental illness guidelines for when a person has a propensity for violence. We have people out there on meds that don’t take them that used to be institutionalized. So we got a really tinderbox situation out there, and people are walking into places with guns. And the way to stop them is not to take away the guns of the good people. That’s a self-defense protection; it’s to stop additional violence. It’s to make sure additional kids don’t get gunned down. So I don’t see a connection in my gun votes to my banning of violence. I’m addressing the other issues of violence in society, which I believe are additional triggers. Take the Aurora shooting in Colorado. There was more than one trigger in that theater. It wasn’t just the trigger on the gun. It was the trigger in the guy’s head; it was a trigger on that movie screen – it modeled exactly what that guy was carrying out in the movie. There’s all kinds of triggers in society and one of them is mixed martial arts. That’s just one thing. And I said this conversation on violence in society needs to start somewhere. Why not with our most violent entertainment?

One could make the argument that movies are our most violent entertainment, especially for kids who may or may not be be able to distinguish between reality and fantasy. Would you be willing to introduce legislation to regulate what movies can be made?
Hollywood does not get a free pass from this conversation. Kids are dying. And it’s totally disingenuous to have these gazillionare actors and actresses act so pious and sympathetic when there’s a gun issue in a school and innocent lives are lost and they are profiting from the very thing that they’re against. The reality line and the fiction line get very blurred sometimes for people in theaters. So it’s a bigger question than just MMA.

Is the UFC Finally, At Last, Dear God, Coming to New York?