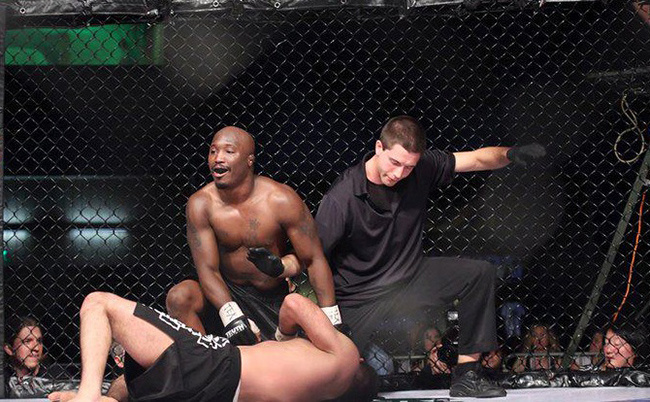 Warren Stewart fought his first pro MMA fight when he was just 18 years old. It was 2007 and he lost to Daniel Pineda, who would go on to fight in the UFC. For his trouble, Stewart got a metal plate under his left eye.

Stewart has an almost manic energy when he talks about fighting and an infectious smile that will make you root for him. He also goes by the name War Stew, which is awesome.

Warren is known around Texas as the guy who will take any fight—MMA or boxing—at almost any weight, though he’s a natural bantamweight. He needs the money. At 24 he has a wife and two young boys. Like everyone else he’s got his eyes set on the UFC, but he also has an 11-18 pro MMA record, which means he needs to fight more, and win more, if he’s going to reach his goal.

Since Warren tends to take any fight he has some crazy stories. Even when he was a scrappy kid, the universe seemed to drop weird fights right into his face.

Fightland: When did you start doing martial arts?
Warren Stewart: I got jumped by some skater boys when I was 10. It was just over a stupid football game. I tackled a kid, and then him and his friends held me down and beat me up.

After that, I got into taekwondo and I was good at it right away. My mom took me out of school when I was in 5th grade. I never went to middle school or high school. That just gave me time to stay in the garage and hit the heavy bag.

One time after I was doing taekwondo, my uncle had me fight another kid because my uncle owed a bunch of money to a guy over some dogfights. He told the guy I’d fight his kid and if I won he wouldn’t have to pay so much money. We were both 10, but the kid was big. I kicked him in the head two times and he ran to his dad.

My uncle got beat up still, though. He didn’t think about it. I whipped this dude’s kid. This dude was about 350, and he was fast. My uncle was about 220, and he was running. This dude chased him down and beat him. But he didn’t do nothing to me. The kid respected me after that; I taught him a little martial arts. Now he’s gotten into MMA. He’s like 4-2 now.

What kinds of things happen when you take any fight you can get?
One time I fought in Mexico. I wasn’t even going to Mexico to fight. I was supposed to help a buddy of mine who was fighting. He was named Ox. A couple of fighters fell out and they needed a couple of fights. They look at me and go, “If you fight this guy bare knuckle, I’ll give you five grand.”

It was the worst place I’ve ever seen. The cage was falling apart. Screws were falling out. When I put my foot on the mat, my foot would sort of sink in. I won, but I didn’t get the money. My manager had an AK-47 stuck in his face and they told us to get gone. I would never fight in Mexico ever again.

I had a very bad manager. He knew I had talent, but instead of him trying to put me in the right fights, he just really wanted that quick money. When you’re 18 years old, you don’t really care. You’re getting cash.

Once he got me a boxing match at 170 pounds and we found out about it just a few days before the fight. I had a 135-pound fight two months before that fight. If you cut a lot of weight, your stomach gets too small. I was trying to cram food in. I carried a cup with me to weigh-ins and put about $80 worth of quarters in the cup. My stomach was all swollen. I still only weighed in at 154, but they let me fight anyway.

You’ve told me you don’t really like fighting. Why do you do it?
I’m good at fighting. I don’t see any joy in it, though. It pays me. It keeps me out of trouble.

I see myself as a martial artist, not a fighter. I fight because I need the money. I need to support my family. I’ve done so well in my career and also dropped really hard. We’ve been homeless.

I lost my last boxing match. I just couldn’t keep my hands up. I felt horrible. My mind wasn’t on that match because my buddy was a fighter and moved in with us and never paid, and we got evicted. That day of the match I had to move out. I didn’t even remember at first that I had a fight that night. We just got our clothes and had to leave everything else. After the fight, we drove to Indiana and left the boys with my mom.

I have a lot of people who believe in me. I know I’m good, but I don’t know if I can keep doing this. I don’t want this kind of life for my boys. I’m just hoping I can make some money and then retire from fighting. I have a great manager now. Nobody wants to fight me right now because they know I’m really angry. I’m on a mission. I need to get my kids back.

But you do like some aspects of fighting, right?
I do like the crowds. Sometimes I can get in trouble with a crowd, but usually they end up liking me.

One time they didn’t. When I won the 145 belt in the XFC, I was like 19 years old. It was at a ROT [Republic of Texas Biker] rally. That’s a white crowd. I beat a white guy. I started dancing around, I humped the ground. I got booed so bad. They were like, “Let’s kill this nigger! We’re gonna get your ass!” I had eight cops escort me to the car.

Another time I was fighting in Oklahoma, right around the time there was a Texas/Oklahoma football game. I wore a burnt orange UT outfit and didn’t understand why people were telling me not to do it. As soon as I walked out, a lady threw beer in my face. Her daughter slapped me.

They ended up apologizing after the fight, though. That happens a lot. Fans boo me when I come out because I’m almost never the hometown fighter, and then they end up liking me. Even when I lose, they like my heart. I love the crowd. I love their reactions. I love the kids coming up after for autographs.