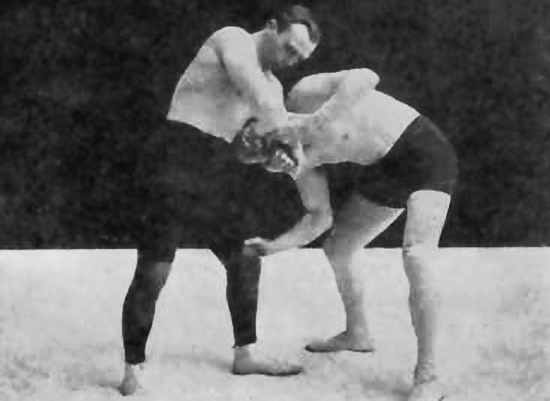 Martin Burns knew men like Evan Lewis. He’d spent 15 years alongside them—working, wrestling, sleeping in the same tents, walking the same roads, eyeing the same women, eating from the same pots, and shitting in the same holes. By his own account, Burns was an incorruptible ascetic from beginning to end; the voices of gruff men, the invitations of stargazers, wafted over him as if an unpleasant aroma. If Martin Burns had one sin, it was pride. But who knows, maybe once, twice, he fell in with the Lewis set, drinking, spending in the way a man spends at a rail camp.

At 25, a man’s dream is realized as a matter of course; he believes he has worked hard enough, he believes he has suffered, he believes he has learned the secret. At 28, the indestructible man is destroyed. Burns, since his loss to “Stompin’ Tom” Connors, had fallen from his aspirations. He had married, his first two children had been born, and though he had persevered, wrestling and competing when he could, he had been drawn into his times, a time that offered weekly wages, a smiling president, and a pine coffin.

The carnival trick of Parson Davis’ challenge—two champions in 15 minutes—was fatigue. As Davis introduced the new player and the galleries settled their bets and laid new bets, Lewis hurried onto the mat, vaulting into one technique after other. Burns withstood the test, breathing hard but breathing steady, his chest as wide around as a barrel. He wasn’t spent yet. Dancing out of a cross-buttock attempt, Burns snapped an arm down for a “quick fall.”

Preparing for Lewis, Burns had been allowing lesser opponents to take the chancery choke, also known as the “neck yoke.” Burns would work his way out then win. But Lewis’s choke was a whole different equation. Lewis had patented a contraption—steel springs and a head-shaped wooden block—that he travelled with and practiced on daily. It was a terrible mistake to give Lewis the chancery, but in reaching for the leg for the quick fall, Burns had done it. Lewis sunk in the choke.

Burns tensed his neck, his chin vanished, he was not going to submit—but it was hopeless. Lewis was pulling him around by the head. Burns slowed, and Lewis touched his heel to the back of Burns’ knee—he’d throw him with the trip, just like he had the first time they fought.

Burns scrambled for a better grip on Lewis’ knee. He had it. Lewis dropped his hips, trying to hold the choke while resisting the takedown.

The standing choke is a slow technique. The advantage on the throw goes to the man applying the choke—he isn’t losing consciousness. But the other man also has an opening; he may not be breathing, but his hands are free, and if he can take his opposition down, he’ll land on top.

In the chancery, Evan Lewis had re-established a choke today considered the most fundamental submission. The chancery choke (now known by such appellations as Japan’s hadaka jime, MMA’s “rear naked choke” or Brazil’s matte leon, “lion killer”) was prohibited by the rules of many old-world styles—Greco-Roman, Cornish, London Prize—as was another technique, which Burns had developed a partiality for since his 1886 loss to Lewis. If Lewis had found the fundamental submission, Burns had found the fundamental throw—the throw of mixed martial arts, the throw of nine-time UFC champion Matt Hughes and five-time UFC champion Randy Couture. A throw that hasn’t changed since Catch-as-Catch-Can dubbed it the “double-leg takedown.”

With a sharp pull forward and a step to the outside, Lewis released the choke. Burns swung back for the leg, but Lewis was there, pummeling under Burns and hauling him up. They were back in the clinch. Lewis, who commonly fought under rules that allowed open hand strikes (Sumo, Pankration), rifled his palm into the side of Burns’ head. The strikes were more insult than menace, but Burns’ didn’t like them, and he broke away.

Men in the audience stood up in their seats—Lewis’s chest was covered in blood. It was Burns’. His scalp was cut, over the ear. That had been his blood, not Carkeek’s, in the first match. Now the cut was open. Blood matted Burns’ hair. Lewis was slapping at the mess with his hand. The two men clinched; Lewis routed his elbow at the wound. When Burns repositioned—came in closer—Lewis drilled at Burns’ head with his chin. By the fifth minute, the floodgates had opened.

All power and stamina, the Strangler modulated the action and attacked the scalp wound, which, by the seventh minute, was pumping blood—over Burns’ ear and shoulder and down his body. The right side of Burns’ cotton breeches was stained scarlet; the white canvas was scuffed sienna, a map of lands unknown.

Nine minutes. Burns had the rubbery bearing of a man about to lose. When a guy has mastered a technique, you can’t stop it even when you know it’s coming; Lewis wanted his choke. Feinting the trip, he took Burns’s head. Burns pushed away, weak, while Lewis worked his second hand into place and applied the pressure. The standing choke from the front, the guillotine, cantilevers a man until he’s nearly off his feet. There’s as much pressure on the spine as on the throat. Resisting the choke by pulling back, trying to pop your head out, puts even more pressure on the back of the neck—and generally, it’s a loser of a defense.

But Burns was bloody as a newborn, and the crowd watched him eke out the fractions of fractions, until his head—gory locks spraying blood—sprang from Lewis’s clutches. Lewis hadn’t held anything back, and he’d blown out his biceps—the risk of a failed choke. Lackluster, he kept Burns away from him for the next six minutes—putting in no more effort than it took to not get thrown, to not get further disgraced.

The crowd called out: Time was up.

Finding a deeper well when he escaped the choke, Burns had finished the bout with skipping attacks—more show than substance. Hoots, grunts, squeals, and whinnies accented the action, and with Burns’ triumph, the theater resounded in barnyard exclamations and the cries, as if to a saint, of “Farmer!”

Parson Davis hurried onto the canvas, reckoning the silver lining; Burns accepted the cash and the handshake. No wave, no lofted fist, he gazed into the house with a staunch half-smile on his face, proud but with humility, or some partly-formulated uncertainty.

Stage right: Carkeek and Lewis. Burns met their gaze. He knew, they knew, he had become one of them; the papers would anoint him—the never-was had joined the ranks of America’s professional fighters.

Center stage: Burns, alone with the knowledge of his own mettle. He would meet Carkeek again, easily overcoming him in a no-handicap rematch; he would meet Lewis again, a third and final showdown, stripping the Strangler of the unified title of Catch-As-Catch-Can, Greco-Roman, Elbow & Collar, Cumberland, and Cornish Wrestling Heavyweight Champion of the world.

Burns knew, as well, with the assurance of choices grained in a man’s flesh, that he was a Christian. And standing at the footlights, amidst an Armageddon of lost souls, he knew that he was more crusader than pilgrim. And he also knew—turning back to the smoky sorrows of America, to the revelry of drunken men, mooing and snorting, beasts with bleary eyes and boozy breath—that this was not what he wanted at all.