Five Years on From the Fall of Fedor 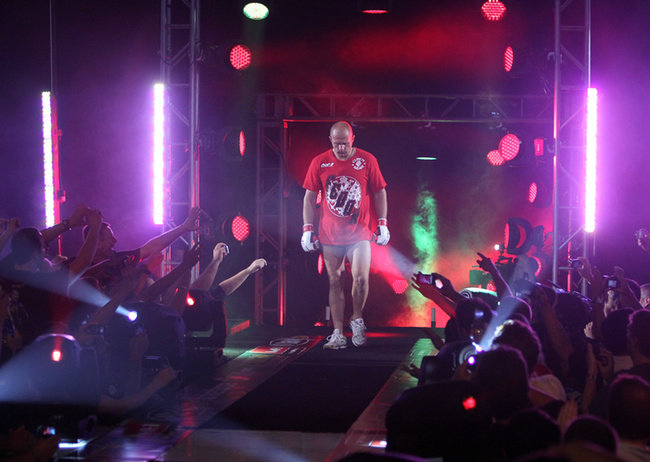 Today marks five years since Fabricio Werdum brought an end to the most dominant reign in the history of the heavyweight division. Unbeaten in ten years and 28 fights, and after seeing off a whose who of some of the greatest MMA proponents of all time, Fedor Emelianenko finally succumbed to the triangle of Werdum after a little over one minute of action in San Jose, California.

Some cracks had begun to show in the displays of Fedor since he had transitioned over to the United States market. First under the Affliction banner, the Russian took a submission victory over Tim Sylvia with ease before moving on to a bout with Andre Arlovski. ‘The Pitbull’ was able to hang in there with Fedor in the pugilistic stakes until he attempted to land a jumping knee. Fedor threw a perfectly timed right hand as Arlovski leapt in to end the Belarusian’s night.

The size of Brett Rogers caused ‘The Last Emperor’ a lot of trouble in what would be his last fight before meeting Werdum. Blood ran from Fedor’s nose after an early exchange. Rogers managed to sweep to gain top position as Fedor looked for a kimura in the first round. The American rained down shots, battering Emelianenko to the point where the bout looked in jeopardy for him. Fedor attempted an armbar on the hulking American to stop his onslaught, which allowed the fight enter the second round.

Just when Rogers looked like he could cause Fedor some legitimate problem, a Hail Mary overhand right landed that sent ‘Da Grim’ to the canvas like a bullet had hit him. The Illinois crowd roared in support of the great Fedor, a reception worthy of his last victory on American soil.

After the fall of Pride, the promotion that hosted the vast majority of Fedor’s bouts during his glory days, UFC had tried unsuccessfully to get the stoic, mysterious fighter on their books. Dana White claimed that the Russian’s management company, M-1 Global, requested that UFC build a stadium in Russia to land Fedor’s lucrative signature, and that they would have to co-promote the shows that their athlete appeared on.

“It’s not even that I regret it,” White revealed years later on his pursuit of Fedor. “Dude, when I tell you that we did everything, someday I'll tell you the story of how much we offered that fucker too. People will fucking shit. It made no sense. It's one of those types of deals.”

Affliction, and later Strikeforce, landing Fedor was a huge deal at the time. As a rising promotion, Strikeforce had managed to secure the one guy that the UFC couldn’t obtain.

He had already gained legendary status. The names that fell to Fedor during his prime are still among the greats of the sport—Arlovski, Hunt, Lindland, Coleman, Filipovic, Randleman and Nogueira to name a few. After Rogers, Werdum was thought to be just another name for Emelianenko’s list. With Alistair Overeem as the Strikeforce heavyweight champion, and Fedor having just one fight left on his contract after his widely predicted win over Werdum, it was a delicate balancing act.

“They greatest fighter in the history of MMA,” the commentators said on the night of the Werdum bout. “He is so famous in his home country that even Russian Prime Minister Vladimir Putin goes to his fights”.

When the action got under way Fedor looked notably softer than he had been at the peak of his powers. He tipped towards Werdum, his hands cocked at the ready. His first combination exploded out from his tranquil gait and whether it was by force or by gamesmanship, ‘Vai Cavalo’ was sent down.

One of the most highly decorated jiu jitsu players in the MMA world, it was like Fedor’s tussles with Antônio Rodrigo Nogueira over the years had made him feel invincible when it came to the gentle art. As Fedor looked to unleash some ground and pound, Werdum attacked an arm. Fedor worked his way out, but Werdum switched to a triangle. The calmness on the Brazilian’s face said it all as ‘The Last Emperor’ thrashed about looking for a way out. A single tap of Werdum’s leg brought his ten-year dynasty to an end.

“The one who doesn’t fall, doesn’t stand,” Fedor calmly told the interviewer in his post-fight address. “I was concentrating on striking, that’s why I made a mistake. We’ll do that analysis and try to find out why happened.”

It seemed like once Werdum had shown that Emelianenko was mortal, it made the task of defeating him a lot more reasonable for future opponents. Antonio ‘Big Foot’ Silva pulverized Fedor in the second round of their February 2011 meeting, which was enough to see Dan Miragliotta stop the but before it could continue it the third. 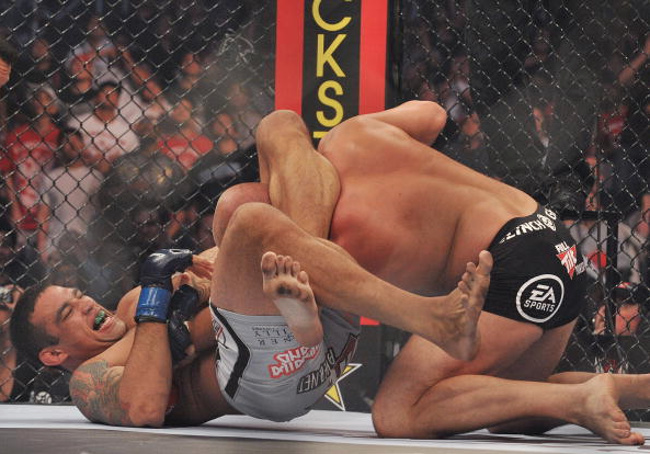 From undersized to oversized, when Dan Henderson jumped up from middleweight to fight the Russian, it looked like Fedor might have done enough to get himself back in the win column at one stage. Cracking ‘Hendo’ win a flurry, the American dropped but as Fedor tried to finish the job, Henderson crept out the back door and landed an uppercut that spelled the beginning of the end for ‘The Last Emperor’.

Having then lost three fights in a row, Emelianenko played out the rest of his career with three more wins. First he took a decision win over Jeff Monson in Russia, then a KO victory over Satoshi Ishii in Japan and finally, another knockout win over Pedro Rizzo. He retired in the ring in front of his countrymen after that bout on June 21 2012. It was a fitting tribute to the legendary heavyweight, and even Putin showed up to pay his respects.

Emelianenko is still very much in the conversation as one of the greatest MMA proponents of all time. While Anderson Silva’s finishes always made him a more worthy pick than GSP for a lot of people, Fedor brought the same devastating stopping power during his reign. While the suspicions of PED use from the Pride days still rage on today, Fedor has never been a man widely linked with the situation due to his less-chiseled physique. When Joe Rogan suggested that Fedor could have been using PEDs in the Pride days he was met with a lot of heat online. With Anderson Silva having been caught, many pointed back to Fedor’s ten-year spell as the most impressive spell of dominance the sport has ever seen.

Werdum has joined the ‘GOAT’ conversations since claiming the UFC title. Taking wins off two of the consensus greatest heavyweights ever—Fedor and Cain Velasquez—has been the driving force behind his entry into the discussion.

Fedor still garners the same admiration from the MMA world as ever. Appearing at the Bellator Fan Fest earlier this month, a very sighting of him can still send social media feeds into disarray. Although there is nothing that supports the notion of him ever returning to the sport, you can be guaranteed that the whole world will be watching if he ever decides to do it.