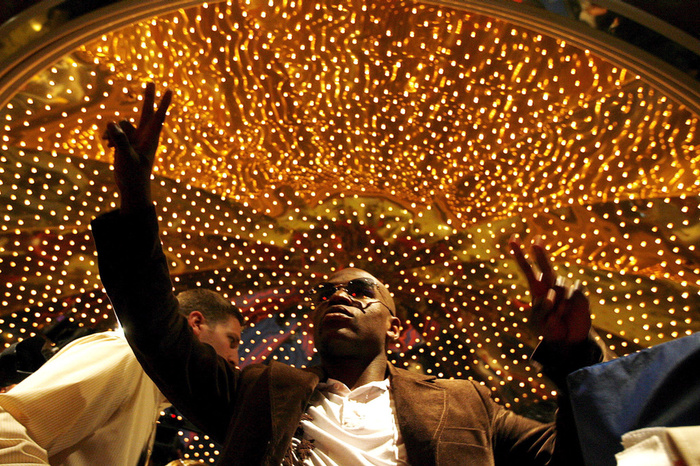 Recently retired boxing megastar Floyd Mayweather Jr. is looking to expand his roster of fighters on The Money Team beyond boxing and delve into the market of MMA promotion.

Mayweather Jr. and his TMT promotion already have 13 pugilists to its credit, including Sweden’s WBC super-middleweight champion in Badou Jack.

Talking to FightHype, “Money” Mayweather doused any hope of boxing fans who wanted him to make a quick return to the ring—opting to concentrate on his new promotional venture.

“They [boxing] want me back. It’s time for me to go over to MMA. It’s time for me to start promoting fights for MMA—I’m ready to get involved with that business now and, of course, you already know what the MGM Grand stands for: “Mayweather Gets Money.” I’m still doing that—every month, the check comes in.”

This is an interesting development from Mayweather Jr.—if there’s anything Money knows better than being a supreme in-ring general, it’s the art of promotion. Though, you can’t help but think this is all bluster to throw boxing fans off the scent of a swift return to the sport that is as inevitable as death itself.

Whether you believe Mayweather Jr.’s words or not, it’s a glaring change in tune from the unbeaten American—who retired at the tail end of 2015 having beat Andre Berto in a unanimous decision, retaining his WBA (Super), WBC, Lineal and The Ring welterweight titles as well as his perfect 49-0 record.

Just eight months ago, the financially-focused Mayweather Jr. commented to FightHype that there wasn’t enough money in mixed martial arts to even stoop to its level by talking about the sport nor its most headline-grabbing fighters in Ronda Rousey and Conor McGregor.

The last sentence isn’t entirely truthful from the artist formerly known as “Pretty Boy” Floyd. Mayweather Jr. has continually “stooped” to the level of various MMA fighters—none more so than the aforementioned pairing of Rousey and McGregor.

Rousey was the first to earn the ire of Money. After picking up her ESPY award as the “Fighter of the Year”, Rousey’s speech referenced Mayweather Jr.’s domestic violence charge from 2010. “I wonder how Floyd feels being beat by a woman for once. I’d like to see you pretend to not know who I am now,” Rousey quipped.

The regular click-bait articles discussing fights between Rousey and Mayweather Jr. in 2014 and ’15 clearly irked Mayweather Jr. at the time, whose standard comeback was to feign not knowing who the former UFC women’s bantamweight champion was. When Rousey was dethroned by former world boxing champion Holly Holm in November, Mayweather Jr. “kindly” offered to teach her a thing or two when it comes to the art of pugilism.

McGregor’s outlandish comments made him instantly comparable to Mayweather Jr. But, the American took umbrage to the fact the Irishman was lauded for his ability to build big fights by making potentially controversial statements, while he was often criticised for it in what he deems to be a racially-based double standard in the combat sports world.

“I don’t really know this McGregor guy—I’ve never seen him fight,” claimed Mayweather Jr. with his go-to defence. He continued: “They say he talks a lot of trash and people praise him for it. But, when I do it, they say I’m cocky and arrogant. That’s so biased! Like I said before, I ain’t racist at all. But, I’m telling you racism exists.”

Dubliner McGregor evidently had an issue with Mayweather Jr.’s comments. In his press conference ahead of his fight against Rafael dos Anjos, which unfortunately never came to fruition, McGregor said: “I didn’t appreciate that one bit. There’s people buried in the desert for less than that. Floyd needs to understand who he is talking about before he speaks and that is that.”

As above, Mayweather Jr. later claimed to have not said anything disparaging about Rousey nor McGregor. But, it’s not the first time Money has brought the controversial subject of race into the appeal of MMA.

In an interview with CBS Sports in 2009, Mayweather Jr. said: “In boxing, we know who’s dominating: black fighters and Hispanic fighters are dominating the sport. This is not a racial statement, but there are no white fighters in boxing who are dominating so they had to go to something else and start something new.”

Saying “this is not a racial statement, but...” as the preface of a racial statement doesn’t exactly nullify the potential effect caused by what was just said—it’s akin to the drunken idiot at the pub who starts a sentence with “I’m not a racist, but...” before unleashing an offensive statement upon your unsuspecting ears.

That same interview with CBS Sports also gave an interesting insight into Money’s opinion on MMA at the time. Prolonging his rant, Mayweather Jr. continues: “MMA is for beer drinkers—boxing is for everybody. You can’t take my shoes off, take my shirt off and then throw me in a cage.  You do that with animals, you don’t do that with humans. It takes true skill to be successful in the sport of boxing.”

So, there’s no money in MMA. MMA is also a sport fit for animals and fans of the sport are closet racists for approving of McGregor’s antics outside of the Octagon.

It would be ignorant to judge a man on the comments made from many years back with a camera and/or dictaphone thrust into your face with onlooking media members drooling for some snappy soundbites. But, it is surprising to hear of Mayweather Jr.’s interest in promoting MMA combatants and/or events in the near future—especially as he claimed there was no money in the sport compared to boxing just eight months ago. This is very much an unexpected u-turn of opinion.

It’s equally interesting to see how he could go about doing this. With MMA’s implicit nature of hosting various sports “leagues”—such as the UFC, Bellator and WSOF—who tie their fighters down to exclusive contracts, it’s hard to fathom how Mayweather Jr. can add to his TMT stable of fighters. Perhaps some co-promotion could be in order?

However hollow Mayweather Jr.’s words may be, this sure makes for an interesting proposition in the combat sports world should he share his promotional expertise in the field of mixed martial arts.

Is Floyd Mayweather Setting Up a Comeback Against Adrien Broner?

Floyd Mayweather Charges Almost $3,000 for Meet and Greet in Manchester