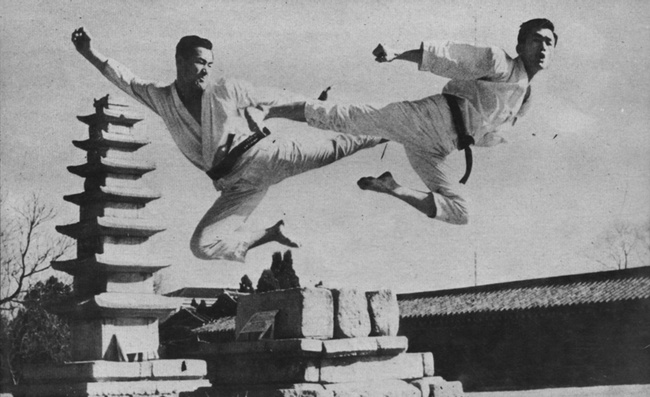 The Shaolin Temple exiles who fled to southern China after the fall of the Ming Dynasty sparked a martial arts revolution in Okinawa, through wandering masters and the Bubishi, but they also had a very strong, indirect influence on Taekwondo, Korea’s contribution to the martial arts world.

Funakoshi Gichin, founder of Shotokan Karate, taught his art to Korean martial artists in the early 1920s and 30s. His students, most notably Won Kuk Lee, returned to Korea and formed the nucleus for what would eventually become Taekwondo. Funakoshi is a legendary martial arts figure and his first forays into that world began under a man named Matsumara Sokon, an Okinawan martial artist trained in Shaolin kung fu (via the Fujian exiles), Japanese Jigen-ryu samurai fighting styles, and the indigenous proto-karate that had developed in Okinawa over centuries of interaction with ronin from all over Asia.

Funakoshi’s book, Karate-do Kyohan, borrows heavily from the Bubishi, and his master is known to have trained with Chinese masters. Yet when he developed his martial art in Japan, Funakoshi helped to re-name the hybrid martial art, removing the reference to the Tang Dynasty (唐手道) and inserting the word “empty” instead.

According to Funakoshi himself, changing the name had more to do with his own philosophy toward martial arts and the idea that “fist and zen are one,” not necessarily with a nationalistic need to remove Chinese influence. The fact is, Shotokan Karate is it’s own art, separate from Chinese kung fu and different in many aspects. The linear, power-punching style of karate veers away from the flowing, animal-oriented styles of the Shaolin masters. The name was the last thing to change.

A similar struggle would happen in Korea, where Won Kuk Lee was promoting Korean Karate, called Tang Soo Do at the time, the Korean translation of the original name for martial arts in this part of the world 唐手道 or “Way of the Tang”.

One of Lee’s students was a gifted martial artist named Nam Tae Hi, who would join up with Choi Hong Hi and become one of the founders of Taekwondo. Choi is a very controversial figure in the world of Taekwondo, and his story is told in Alex Gillis‘ book, “A Killing Art: The Untold History of Taekwondo”. The book is a fascinating look at how martial arts can be employed by the state as a tool of oppression and control, how the Korean CIA worked tirelessly to co-opt and use Taekwondo to control dissidents, and the internal rivalry between Olympic style Taekwondo and the “original” killing art developed by Choi in the first half of the 20th century.

Gillis also describes how Choi took Shotokan Karate and merged it with his own ideas, learned in the army and developed through his own training and work with the greatest martial artists in Korea in the 1940s, 50s and 60s. The fusion and evolution of Shaolin Kungfu into Shotokan Karate, and the influence both had on Korean Karate (Tang Soo Do) is the true beginning of modern Taekwondo. 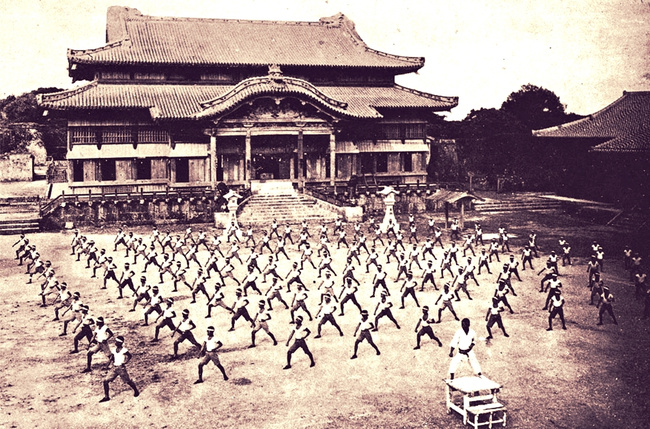 The Art of Kicking

One of the most interesting aspects of Taekwondo’s development is the incorporation of Taekkyeon, an old Korean martial art, into the story - first as a political nod to anti-Japanese sentiment, and later as a true innovation upon Funakoshi’s Shotokan Karate.

Taekkyeon almost died out during the Japanese occupation of Korea (from roughly 1876 - 1945), due to a ban on the practice of Korean martial arts. It lived on in the memories of the first wave of post-WWII martial artists out of Korea and, eventually, became a part of the new Taekwondo martial arts system devised by Choi Hong Hi over two decades of research, training, and theorizing. His theories were very interesting, employing physics (E=1/2m x s2 i.e. speed is more important that mass when cultivating power), aerial attacks, and kick-centric techniques evolved from Taekkyeon.

The Korean kicking style separated Taekwondo from Karate, and helped spur the popularity of the martial art around the world. Choi took a group of his best martial artists around in the world in the 1960s, drawing big crowds in Italy, West Germany and Egypt; and following the Koreans’ extraordinary accomplishments fighting the Viet Cong alongside American Marines, Taekwondo took off in the US as well. At that time, the art was powerful and lethal in the hands of trained masters, and awe-inspiring when men like Nam Tae Hi jumped over men and broke boards with flying kicks in staged sessions. As Gillis writes here:

“People were used to the overwhelming power and speed of Karate and other martial arts, but Choi claimed that the height, dexterity and power of flying kicks showed ha the athleticism of Tae Kwon Do was unique. He wrote: “Certain detractors claim that flying techniques are both impractical and dangerous [in sparring] ... Numerous Tae Kwon Do instructors, with years of experience, can testify that a well-executed flying kick conducted with speed is not only extremely devastating, but has the added advantage of surprise.’”

“Martial artists were supposed to leap and spin from every angle (kicking and punching along the way) and land with perfect poise. They were to rely on T’aekkyon-inspired leg techniques, a lead leg shooting out as fast as an arm for example. And they were supposed to memorize scientific formulas and now exactly what they were doing in every tenth of a second of a technique. Tae Kwon Do was becoming insanely athletic.”

The Future of MMA

Insanely athletic. That’s an adjective that applies to many of the top MMA competitors today. In the 1960s, when Koreans were wowing the world with flying kicks, wheel kicks, and board breaking lead side kicks, martial artists ate it up. Taekwondo blew up. Now we are arriving in the age when men like Jose Aldo, Jon Jones and Conor McGregor are putting together the boxing game with the ground game, and adding in a kicking game that takes it to the next level of martial artistry. The type of person who may do video game stuff in an actual fight, and not just in a staged demonstration, or once in a while in a sparring session. There are exceptional athletes throughout the UFC now.

This weekend we have Edson Barboza, an amazing kickboxer, against Michael Johnson, a gifted boxer and wrestler—the betting line is tight on this one, and it will most likely prove to be the most technically masterful fight of the night. Will there be a wheel kick at some point? Some strike with the vestiges of Fujian, Okinawa, or Seoul in there somewhere? Most likely.

Getting to where we are today has been a zigzag path hacked out by solitary masters, singular visionaries who spawned a dozen disciples, who then spawned hundreds more. Each wave led to new innovations, new takes on a living thing, the martial tradition. Every day, someone in a gym somewhere does something he or she has never done before.

For today’s martial artists, knowing the roots and history of the martial arts is critical to innovation and adaptation. Everything about today’s mixed martial arts is an adaptation of what exists into a new, hybrid art that works. The deeper one’s knowledge of the art and its roots, the more material there is to adapt, innovate, and improve upon.