For Her Comeback, Ronda Rousey Is Keeping Fame at a Distance 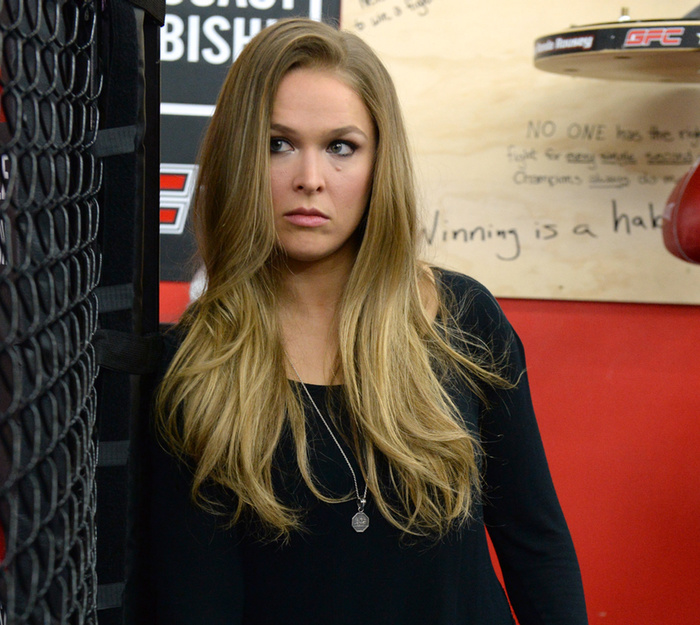 Ronda Rousey is a case study in the contradictory effects of American fame on the psyche. Plucked from obscurity; lifted to unprecedented heights of fame, fortune, and social significance by an unprecedented run of domination through her weight division (formed entirely to justify her presence in the Octagon); revered by a generation of young girls as a hero out of a comic book; embraced by Hollywood and late-night talk show hosts and all other corners of the American pop culture landscape; touted as the greatest fighter ever by the MMA media; only to be dashed down after suffering a humiliating knockout loss last winter, her career and skills declared dead and buried yet un-mourned by the same media that had deified her; turned away by movie studios; criticized, castigated, and cast down by fans and fellow fighters—the same spotlight that had lifted her up quickly swallowed her whole, and Rousey disappeared for a year in response, terrified of the celebrity that had come to define her. Now, a mere nine days before her long-awaited return to the Octagon, against bantamweight champion Amanda Nunes, the one-time biggest star in the fighting world is back, but only in body. Her spirit is elsewhere, tucked safely inside itself, outside the reach of the media. Ronda Rousey, battered and bruised by American fame, has come back into the spotlight as a kind of ghost, keeping almost total radio silence, like a dissociative soul blocking out a trauma.

From all reports, a hands-off, long-distance approach to media responsibilities was part of the deal Rousey made with the UFC before agreeing to come back to face Nunes. After almost single-handedly lifting MMA into the realm of mainstream success (before passing that baton to Conor McGregor, who seems more enlivened than traumatized by the glare of fame), it seems Rousey can now demand what she wants from the company when it comes to promotional duties. In a recent feature story on ESPN.com by Ramona Shelburne, Rousey says the terms she negotiated ahead of UFC 207 included limited publicity appearances: just a few high-profile interviews with non-MMA media personalities like Conan O’Brien and Ellen Degeneres, one day of filming at her gym in Glendale, California, and a single staredown photo-op with Nunes during UFC 205 weekend, a staredown that turned into a minor scandal and major rumor-mill when Rousey stormed offstage before being interviewed by Joe Rogan. Was the incident proof of Rousey’s lingering fame-induced shellshock or of the fighter’s newfound maturity, devotion to self-preservation, and tightly controlled, hermetically sealed approach to the media?

As UFC 207 has gotten closer, when the workings of the UFC’s publicity machine would normally be reaching a wild, fevered pitch in anticipation of a Rousey fight, and the star herself would be in front of every available camera and giving time to every man or woman with a microphone and her face and her voice would be ubiquitous, as would the editorials about her fighting genius and socio-political meaning—the silence from Rousey has been deafening. For all the appearances she’s made you would think she was a little-known journeyman headlining a middle-of-the-week UFC on Fox card, instead of the biggest star in the history of MMA and a once-in-a-lifetime social phenomenon returning to the cage after a year in the wilderness, which is what she is. Rousey is not only not everywhere, she’s nowhere. She even skipped a media lunch the promotion set up yesterday. At this point we can only speculate whether Rousey will be showing up to any pre-fight media events, the press conference, the media scrum, the open workout. I wouldn’t be surprised if she didn’t show up at the weigh-ins—if she demanded the scale and the official from the Nevada Athletic Commission be brought instead to her hotel room where she could be weighed in private. Because even in self-imposed media exile Ronda Rousey is the one UFC star (with apologies to Conor McGregor) who transcends the sport and the power of its biggest promotion and who therefore has the leverage to bend them both to her will.

Maybe putting up with all that celebrity for so long, living through its cruelties and its inconstancies and its hypocrisies, was the price Rousey had to pay to get to where she is now: that rarefied place where she doesn’t have to do anything she doesn’t want to, a truly liberated soul. A woman who has earned her freedom by suffering all the torments of American fame.