For the Love of Money: Manny Pacquiao Fought with a Serious Injury 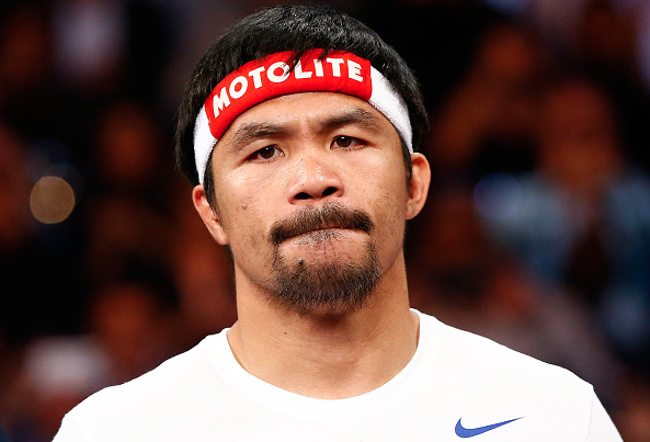 In the Nevada State Athletic Commision’s “Pre-Fight Medical Questionnaire,” trainer Michael Koncz marked “no” when asked if Manny Pacquiao had any injury to his shoulders, elbows or hands that needed an evaluation.

It wasn’t true. The fan-favorite of boxing’s most lucrative event in history competed with a torn shoulder. Confirming the injury to ESPN on Monday, Dr. Neal ElAttrache stated that, “an MRI scan confirms he has a rotator-cuff tear,” and that the injury would prevent Manny from training or competing for over a year, and will require surgery.

NSAC Executive Director Francisco Aguilar, according to Kevin Iole, found out about Pacquiao’s injury over two hours before the fight started—hardly giving the commission enough time to study the MRI that had already been done. More importantly, the commission was unable to deliberate and decide if it was fair for the consumer for him to compete at all.

Here is a copy of the form in question via TrueInk.com, which is signed by Manny himself: 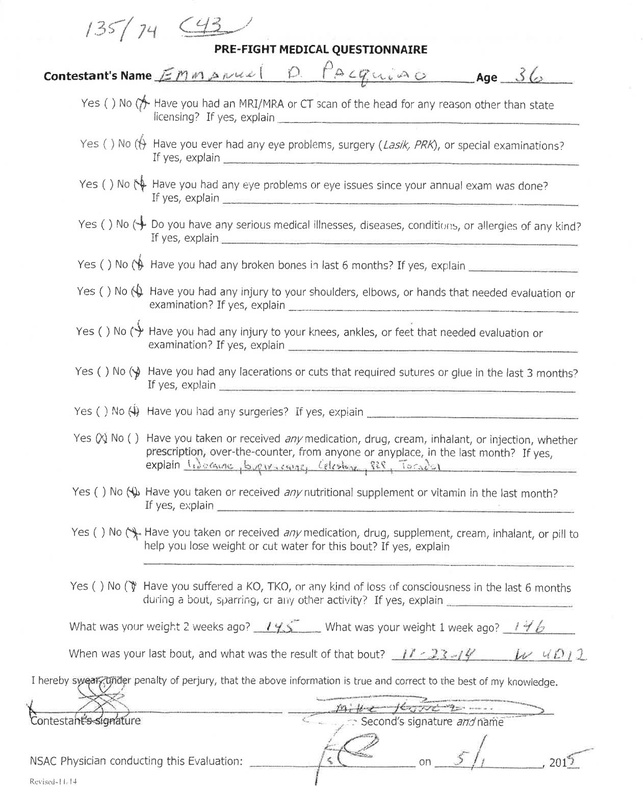 You see, apart from the regulation of athletes, commissions serve to protect the fans. For instance, if you bought a ticket for a 12-fight MMA show in your hometown, but the promoter cancels over four fights, the commission is supposed to shut down the event. The reason is that the consumer needs to be protected from false advertising. In this case, the commissions require large surety bonds, which would be used to pay back those ticketholders in the event the promoter fails to hold up their end of the bargain… or skips town.

In the case of Manny fighting with an injury, it could be argued that same protection applies. Did we all pay $100 dollars to watch an injured fighter chase Mayweather around, throwing less strikes than normal (18 jabs, compared with 67 for Mayweather). It may not be as cut-and-dry as canceled bouts, but of all of the regulatory requirements are in place, medical statute (which includes the pre-fight medical information) is the most important.

The truth came out about 30 minutes after the fight ended.

On Monday, Manny’s camp made an official statement:

“Manny’s advisors notified the United States Anti-Doping [Agency] of the shoulder injury and the treatments being propose by the doctors during training and on fight night. USADA spoke to Manny’s doctors twice, investigated, and confirmed in writing that the proposed treatments, if used, were completely allowed. The medication approved for fight night was a non-steroidal anti-inflammatory.”

The USADA was at the event to oversee drug testing, but is not involved with the commission’s medical protocols, and does not have any authority to make decisions. Pac-Man asked for an anti-inflammatory shot of Toradol prior to stepping into the ring that night, but not once did he, or Top Rank, report that he had sustained an injury during training.

It’s yet to be seen is the Francisco Aguilar’s NSAC will react and seek disciplinary action, but something tells us they won't. Aguilar had his chance to cancel the bout, but it seems unlikely that he would have so late in the game, and with so much money for his commission (which stands to make a windfall on gate taxes) on the line.

And that’s just it, with everyone having so much money on the line, it’s no surprise that no one did the right thing. Manny hid his injury from the fans, his trainer lied to the commission, and the executive director did nothing when he found out.

The NSAC has said that their attorney general will look at the false answer on the questionnaire, and that Manny could face a hearing and a potential fine, but let’s be real—the damage has already been done.

It’s a disappointment to watch such a lukewarm performance from the underdog, but it’s a more serious bummer when the performance was done under false pretenses. We will never know if Manny’s shoulder injury actually had an impact on the fight, but that’s the point.

Pinoy Pride: Who Will Be the Next Manny Pacquiao?

Mayweather versus Pacquiao: Beyond the Hype