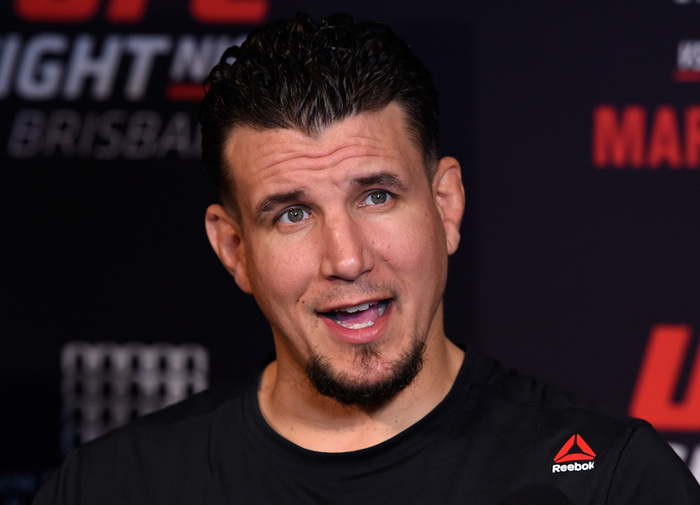 It was announced late on Friday that two-time UFC heavyweight champion Frank Mir had potentially failed a drug test following his TKO loss to Mark Hunt in Brisbane, Australia.

The U.S Anti-Doping Agency (USADA) were very careful with their wording, ensuring it is known the flagged test for performance enhancers was not yet definitive, so it’s important to not accuse Mir of ultimately being caught for the banned substance of oral turinabol—especially given his clean record of having never failed an anti-doping test before.

Mir, who is 2-2 in his last four contests beating Todd Duffee and Antonio “Big Foot” Silva and losing to Hunt and Anrdrei Arlovski, was transparent of his use of Testosterone Replacement Therapy (TRT) in his career while it was legal. But, the fact remains is Mir has never been caught taking any prohibited substances ahead or after a fight in his esteemed MMA career.

Mir, expressing his apparent surprise at the accusations, quickly took to social media to quell anyhasty accusations sent his way. 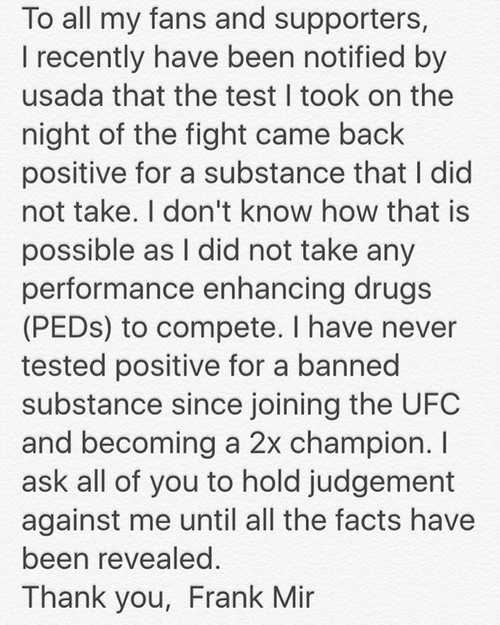 Given that Mir has not failed a drug test before, you would forgive him for being at a loss as to how his examination in Australia had been flagged for potential violation.

Searching for some reasoning behind this potentially failed test, he took to his Phone Booth Fighting podcast to protest his innocence and explore the possible explanation behind the accusations made against him by USADA.

“I couldn't tell you a single restaurant I remember eating at. I even remember calling James and saying 'do you remember where we ate?’.

“I had to write down all of the places we went. Even if I could figure it out are you telling me USADA are gonna go down, and, on my behalf, try to test all the different meats to see if kangaroos are wild and this guy wanted to beef ‘em up so he bought something that was very abundant? In the study that I did, oral turinabol could be bought in powdered form.

“You put it on their food and you bulk up your livestock. They then sell it into the stores because now you get more bang for your buck. An animal that takes two years to reach maturity, you know, muscle weight, now in four months he's bigger than he's ever gonna be and you slaughter him.

“It's common practice. I don't know, I'm not pointing the finger anywhere, I'm just saying there's so many loopholes for me to sit there and go 'where did it come from?'. Hell man, I don't know - I really don't. All I know is that I didn't willingly take anything."

Mir was slated to appear on Sunday afternoon’s FOX Sports show covering the UFC’s first visit to Zagreb, Croatia. However, in light of the accusations made against him, Mir was not featured as a panellist.

However, the excuse of tainted kangaroo meat potentially spoiling a drug test is one of MMA’s stranger explanations in a sport already filled with a plethora of odd justifications for such—including the reasoning behind Anderson Silva’s failed drug test being due to the Brazilian ingesting “sexual performance medication.”