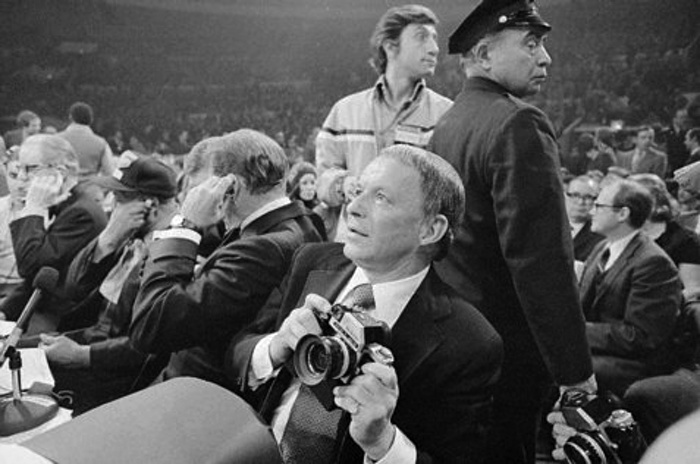 Had he lived, Frank Sinatra would have turned 100 last Saturday, right about the time Conor McGregor was knocking out Jose Aldo and ushering in a new era of well-dressed, well-moneyed dominance in front of tens of thousands of rabid devotees that Sinatra himself would have admired.

Like McGregor and all other true megalomaniacs, Sinatra took few breaks, but one occurred in late 1970, when the singer made his “final” recordings before officially retiring the following summer. Which meant by the spring of 1971, Sinatra, who had spent his entire life keeping himself busy and being plagued by loneliness and thoughts of suicide during those times when he wasn’t, was looking for something to do. And in spring 1971 the thing to do was the Muhammad Ali-Joe Frazier title-unification fight at Madison Square Garden on March 8. Everyone who was anyone would be there: Miles Davis, Woody Allen, Walt “Clyde” Frazier. Burt Lancaster would be the guest color commentator. Norman Mailer had been hired by Life Magazine to write a story about the fight, aptly titled—for Ali, for Frazier, and for Mailer—“Ego.” 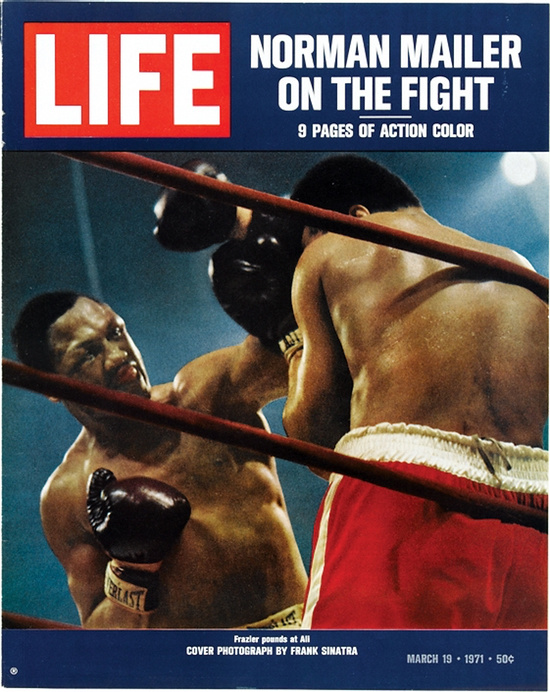 The Fight of the Century wouldn’t be just the social event of the season, though, but a culture clash, a crossroads for a country deep in the miasmatic throes of the Vietnam War and torn apart by it. In the great metaphor that the fight became (metaphors being all the rage in the 60s and early 70s) Ali was the unhinged new world order: the brash, trash-talking African-American superstar-turned-hero-of-the-anti-war-left, who had just returned to boxing after three years in exile following his refusal to fight in Vietnam, an anti-establishment terror and race-warrior with a thick FBI file. Frazier, meanwhile, was the quiet and stolid savior of right-of-center America, of white America, of what had been. Their fight would be a battle of two ideologies.

And Sinatra had to be there. In addition to needing to be seen and needing to do something, anything, the singer had a long history with boxing and with Ali. Six years earlier, at the height of his powers, Sinatra had famously backed former world champion and Civil Rights activist Floyd Patterson to beat Ali, the loudmouthed Black Muslim traitor who had turned his back on his country and the “movement.” Sinatra hoped Patterson would crush Ali, thereby proving white liberal America right and winning “the title back for America.” When Patterson didn’t, suffering a humbling, brutal 12-round beating and berating, Sinatra, who, like Ali, could be cruel, turned his back on Patterson and never spoke to him again.

Now, in spring 1971, long past his days as a liberal, a supporter of the War in Vietnam and still a hater of Muhammad Ali, Sinatra, needed to find a way to be at Ali’s fight with Frazier. And Sinatra being Sinatra, he needed to be up front. Whatever way he could. Tickets were scarce, though, even for the Chairman of the Board, so Sinatra found his way to ringside (in front of front row—how like Sinatra) by taking on the role of a guest photographer for Life, which was looking for photos to accompany Mailer’s story.

How Sinatra got the job is still the subject of debate. Some say the singer hadn’t been able to get a front-row seat on his own, so he’d gone and made a deal with Life’s managing editor, Ralph Graves, who wisely saw the promotional value of having the name of the world’s most famous singer attached to a photo spread in his magazine. But Graves disputed that account, saying Sinatra was always going to be at the fight and was always planning on bringing a camera with him, photography being a lifelong hobby.

“For our pictures of the action, we were relying on the magazine pool photographers at ringside, especially Sports Illustrated’s Neil Leifer and Tony Triolo, who delivered outstanding pictures. But it never hurts to have a horseshoe in your glove,” Graves said. “Shortly before the fight [staff writer Tommy Thompson] learned that Sinatra had wangled himself a ringside seat and was going to take pictures with a battery of cameras. Tommy went to work wangling Sinatra into letting us have a look at his film. We didn’t expect to get anything the professional photographers didn’t have, but it might be worth inspecting.”

Sinatra must have seen something that night because at least four of his photos ended up in Life’s nine-page spread. Sinatra would later tell New York Daily News sportswriter Bill Gallo, "I got some good pictures that night, but I kept watching Frazier putting his head too far out for Ali to punch it. He was defying Ali, and I said to the newspaper guy next to me: 'He may win, but if he keeps that up, he's going to the hospital, taking all those punches.'” Singer, actor, photographer, and now boxing coach.

Frazier would win that night by unanimous decision after knocking down Ali for the first time in his career. The two men would go on to fight twice more, with Ali winning both times, and Sinatra would return to singing two years later. Which means on his first and last assignment as a freelance photographer the Hoboken-born singer grabbed the most-coveted prize in the history of photography: the cover on Life Magazine. But though that cover photo—an awkward shot of a swollen Frazier crowding Ali against the ropes—might have helped sell magazines, it hardly pleased everybody. In a letter to the editor published the following week, former Life staff photographer Robert W. Kelley fumed to his onetime employer, “Sirs: I'm so mad I could chew nails and spit tacks. I've been a professional news photographer 34 years (about 18 on LIFE's staff) and what irks me is your cover. It was obviously selected because Frank Sinatra took it, rather for any photographic excellence. In fact, it was a bad picture. What millions of LIFE readers wanted to see was Frazier's fist firmly implanted against Muhammad Ali's mouth.” Kelley knew what he was talking about. The Seattle native had made his reputation during his 20 years at Life covering the space race and the Civil Rights movement. He once suffered a broken leg running from camera-shy segregationists in Clinton, Tennessee.

Meanwhile, reports say Frank Sinatra was the third-most-photographed man in Madison Square Garden that March night in 1971, ahead of even Miles Davis, who was draped in velvet. Between rounds Sinatra’s fellow sports photographers would turn their lenses from the ring to the singer standing next to them, holding a camera of his own. Even drifting into retirement Sinatra found a way to remain the center.