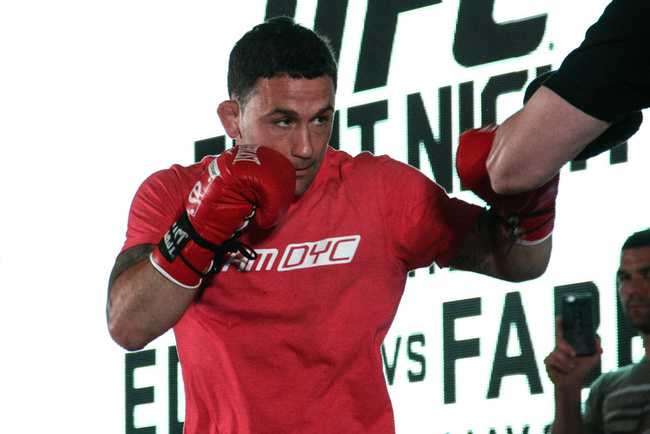 At UFC Fight Night: Edgar versus Faber, Frankie Edgar showed us all that he is still undoubtedly the second best featherweight in the world. Against Urijah Faber, who hasn't ever lost a non-title bout, Edgar looked cool calm and collected as he cruised to a dominant decision. Fans will moan, and the cries of “point fighter” were many, but there's no two ways about it: Frankie Edgar boxed Urijah Faber up, and he made it look easy.

For many, it wasn't the kind of fight they hoped for. I've watched the bout twice since it took place, and I can already tell you that it's one of the better all around technical performances I've seen in a while. Yes, Edgar isn't knocking anyone out, but that's why we put heavyweights on cards—they swing, they gas, one gets finished, everyone is happy.

No, if you watched this fight and couldn't learn anything, or admire the craft of Edgar, you've really missed out. Last night, Frankie Edgar was a textbook of striking.

The old saying 'it's all about balance and timing' is a great one to throw out any time you're watching a fight at a bar—or any time anyone asks you about anything, in fact. It can mean absolutely nothing of substance to you as you feel the tripe slide out between your lying teeth, but it will probably be true anyway. In the main event in Manila, balance ruined Urijah Faber's night.

Faber hasn't changed much in the last five years—it's always been all about the overhand right, and bouncing around in a really long stance. If he has opponents who are willing to step into him without ever feinting or setting anything up, he can crack them with the overhand across the top of the jab—forming a cross counter and normally shaking them to their boots. The problem is, when he leads it tends to look like Chad Mendes did about four years ago, before the influence of Duane Ludwig: sprinting with right hands in between.

Faber's long stance and heavy lean on his front leg leave him struggling to move across the floor effectively, so he will break stance and run.

The throwing of his head forward into these charges, and into his overhands, leaves Faber completely exposed to returns. So for much of the bout Edgar went catch-and-pitch on the overhands. He'd catch one, or it would slip through and he'd take it, and he'd immediately dust Faber up with an uppercut or two, and maybe a left hook. The uppercut works wonders against the overhand if you can avoid getting knocked out by the overhand first—it's a fine tight rope to walk and Edgar did it consistently for twenty-five minutes.

Watch how Faber overcommits with his head and feet, making it difficult to recover and impossible to 'hit and run'.

Throwing your whole weight into every strike you attempteats up energy and makes you very easy to counter for the man who can stay on top of his feet and remain non-committal. Every big swinging right that Faber attempted, he had to try to recover his weight and his head from, and most of the time he got hit twice in the process.

Now to Faber's credit, he had added a nice new tool to his arsenal this time around. It wasn't just the counter right hand and the running right hand, he was trying to check hook Edgar with his lead hand every time the faster fighter stepped in. And this is what a fighter should be doing to compensate for a speed disadvantage, timing his opponent's steps, rather than trying to keep pace with their strikes.

It's exactly the same tool which has Mark Hunt dropping heavyweights with ease. However, Edgar took it away in exactly the same way Stipe Miocic recently took the hook away from the aforementioned Hunt: feinting. Every time Edgar feinted, Faber would commit to his left hook and leave himself vulnerable.

Every time Edgar feinted a step in, Faber swung this hook. Edgar soon began to take advantage of it in a number of ways. The first was the obvious—as Faber's elbow came clear of his body and he threw his weight into the blow, his hips were completely exposed, so Edgar ducked in for an effortless takedown.

Other times, Edgar would feint a step, allow the hook to swing through and then kick the back of Faber's lead leg. Faber was pivoting on the ball of his foot on every hook—which is sound form in boxing, but less favored in kickboxing for the reason that it completely exposes the fighter's tender hamstring and the back of his knee to kicks which will buckle his stance.

Little feint jab, with a shorter step than one would make to step in and punch, Faber's hook misses, Edgar kicks the leg.

And on other occasions Edgar would look to duck down to his left side and throw the right hand across the top of Faber's hook—readers will remember that after a period of adjustment, this is how Junior dos Santos began to catch Mark Hunt.

And when Edgar ducked the hook and went to the body, as he is wont to do, he almost always found Faber's kidney because Faber had rotated so far into the blow.

The important point, though, was how Faber was almost glancing back at Edgar over his shoulder each time he'd whiffed the lead hook. He was badly out of position when Edgar chose to follow up.

On offense? The usual Edgar favorites were in there. The many jabs and body jabs, the occasional kicks, the many level changes. Level changes have been a staple of Edgar's game since he started in the UFC—by going to the body frequently, he can set up his takedown attempts later in the bout. Here's his standard right hook to the body, left hand upstairs—where the left hand closes the door on the opponent should they attempt to counter.

It was also nice to see the jab to body hook—but a variation which you don't see quite as much, where the body hook is thrown in with the elbow up and coming across parallel to the floor. Most fighters throw the left hook to the body with the elbows tight, to sneak it in, but in a jabbing battle a slight level change renders the standard left hook into a nice punch for the solar plexus or floating rig (depending on the opponent's body angle). The jab to parallel-to-floor body hook is a technique which the British boxer, George Groves goes to a lot, and he had some success with it in both of his bouts with Carl Froch.

This knee pick has been a staple of Edgar's game for a long time. It was this technique which gave B.J. Penn fits through two fights. He'll pick it up and try for the takedown, he'll pick it up only to drop it and come up punching, or he'll grab a hold of it and drive the opponent back before kicking them in the body. It's a very versatile little technique that is certainly a good deal safer, and more compatible with the striking game, than a long shoot.

There were a couple of other interesting moments in the bout, such as Edgar's drive to the fence and back kick—which he attempted two more times but came dangerously close to giving Urijah Faber his back.

A perfect example of using the fence to force an opponent to circle out into a power strike.

Or his left hook into wheel kick in the last round.

Ultimately, the bout was a demonstration in the just how much feinting opens up the offensive striking game and neutralizes the counter punching one. There's been a ton of criticism about Frankie's feint four times, attack once style, but the results absolutely speak for themselves. Even top level fighters like Renan Barao look less than half as dangerous when they're convinced to swing at air by guys like Eddie Wineland and becoming reluctant to commit on their counters.

With two fantastic counter strikers going at it for the featherweight strap in Conor McGregor and Jose Aldo, you've got to think that Edgar is feeling pretty good about another title shot after this brilliant performance.

Edgar vs. Swanson: Wrestling Is the Answer