From NFL Cheerleader to MMA Fighter 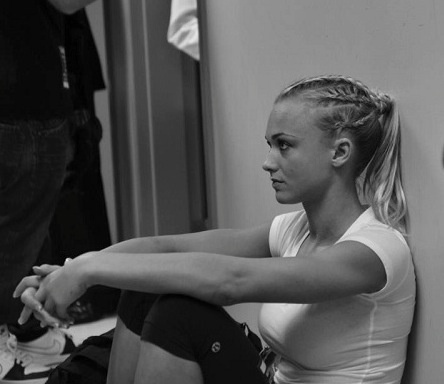 This time last year, Rachel Wray was spending her Sundays on the sidelines of Arrowhead Stadium as an NFL cheerleader for the Kansas City Chiefs. She stumbled onto an MMA gym looking for a way to change up her workouts, and before long she preferred the feel of the canvas to the stadium turf. Now she's left the NFL for the fighter's life. Now when her lips are red at work, it's not lipstick -- it's blood. Wray talked to us about leaving cheerleading and how she's prepping for her upcoming fight at the Voodoo Lounge in Kansas City later this month.

Fightland: Is there any similarity between fight training and cheerleader training?
Rachel Wray: (Laughs) There is nothing similar between fight training and cheerleader training. To be a professional cheerleader you need dance practice, swimsuit modeling, football knowledge, public speaking, and to have perfect hair, nails, and makeup at all times. I always laugh when I get out of a fight practice because I always look so disgusting --  drenched in sweat, no makeup, hair a huge mess. As a cheerleader if your lipstick isn't perfect at practice, you get in trouble. They are polar-opposite worlds.

Why did you leave cheerleading to become an MMA fighter?
The reason I chose to leave cheerleading to fight was simple: I enjoyed it more. Just when I was really getting into the MMA training, Chiefs cheerleader auditions were approaching. I had to make a decision; it was impossible to do both. I knew it was right because on nights when I had cheer practice, all I could think about was that I wished I was at HD (High-Davis Mixed Martial Arts gym). Fighting made me happier than cheerleading. I enjoyed it so much more. So I made the switch.

Do you remember the first fight you saw? How did it make you want to be a fighter?
Coming from Arkansas, a place where football is the only sport that matters, I didn't even know what cage fighting was until I moved to Kansas City. The first fight I ever watched was Ronda Rousey versus Miesha Tate. I watched it on YouTube. That fight really inspired me and I still love to watch it to this day. That fight is the ultimate example of how girls can put on an entertaining show, just like the boys. I'd never been interested in women's sports to be honest ... until I found MMA. Now I can't get enough of girl fights.

Did you have any martial arts or fighting background prior to going MMA?
I have been a cheerleader, dancer, and gymnast my entire life. I have absolutely zero fighting background. I have been built completely from scratch by my coaches. I train four to five nights a week at HD, which includes sparring two nights a week, grappling two nights a week, along with boxing/Muay Thai pad work, wrestling, and gi jiu-jitsu. I also run several times a week to keep my cardio strong. I do private lessons with my boxing coach Melvin Wesley and jiu-jitsu lessons with my coach Travis Conley to work on technique. LC Davis and Jason High are my MMA coaches; they help me with my training as well.

Do you find it's harder to be taken seriously as a fighter as a woman, or former cheerleader, because it's considered such a macho sport?
I've never really had a problem with people not taking me seriously. In fact, being a girly cheerleader has worked surprisingly to my advantage in this sport. I have a very unique story, and people are entertained by it. I think I proved to everyone in my first fight that I am serious, and it will only get better going forward. Of course, there will always be haters, but I don't let that get me down. Those people are just ignorant or jealous. If you don't have haters, you aren't doing something right.

What are your goals for your MMA career?
I want to go pro someday. I need to get a lot more experience as an amateur, but this is something I could see myself doing as a career. I can't imagine my life without it.