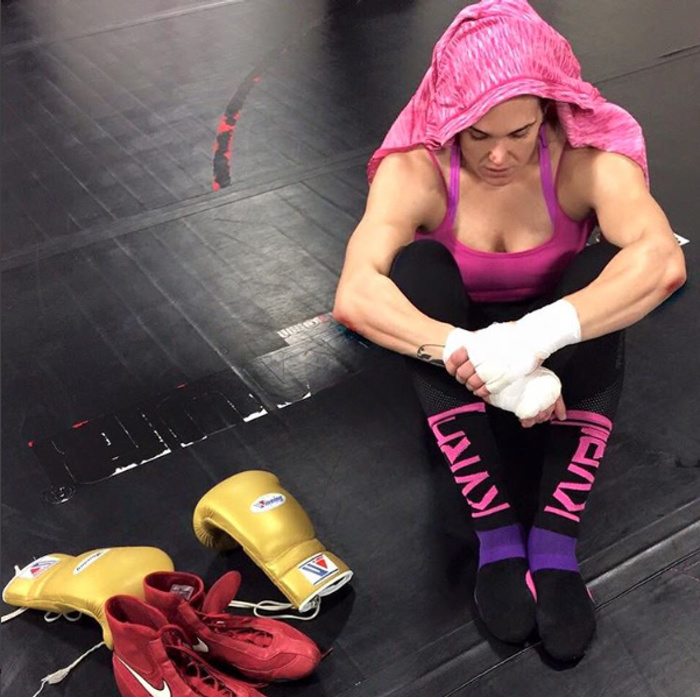 Well, you guys, Rizin Fighting Federation is really, really determined to see a pugilistic car crash between a behemoth female jiu jitsu champion and an aging and (relatively) diminutive Japanese pro wrestler, even when someone riding shotgun tries to jerk the steering wheel back onto the road of common sense.

The good news is that Gabi Garcia—the 31-year-old, 205-to-245-pound 3-0 WMMA neophyte and nine-time Brazilian jiu jitsu world champion—isn’t going to fight 52-year-old, 165-ish-pound retired pro wrestler, 90s-era MMA fighter, and Japanese politician Shinobu Kandori. At a press conference on Thursday, Rizin announced that Kandori suffered a rib injury in training, scuttling her New Year’s Eve bout with Garcia at the Saitama Super Arena. This should have been an intervention of fate: an overmatched fighter incapacitated in training weeks away from the event could have led to a cancellation of the fight and given an out to all involved in this debacle. Everyone, from Garcia to Rizin president Nobuyuki Sakakibara, could have saved face without admitting they’d ever done anything wrong. And maybe the sudden withdrawal of Kandori would have forced Rizin’s matchmakers out of their fog of depravity and into a private moment of clarity where they could ask themselves, “Wait, what were we doing here? That was a terrible idea.”

Maybe. But nah, Rizin just went and found another female Japanese wrestler hovering around 50 years old to spend her New Year’s Eve getting pummeled by Garcia instead.

Yumiko Hotta, who weighed 165 pounds the last time she competed and who turns 50 in January, has a sports entertainment career stretching back to the mid-1980s that continues through today, working across an alphabet soup of Japanese pro wrestling promotions. Hotta also came up in the same wrestling-MMA crossover tournaments as Kandori, even facing a common 300-plus-pound opponent in former Olympic judoka Svetlana Goundarenko. (Kandori lost and avenged her defeat to Goundarenko; Hotta lost and didn't get the chance.) In fact, Hotta and Kandori fought in the latter’s most recent MMA fight back in 2000, losing by armbar.

As Garcia’s prospective opponent, Hotta’s advantages over Kandori are that she's 5-4 instead of 4-1—so quantity over quality—and that, a dozen years after her loss to Kandori, she knocked off some rust. In 2012, Hotta fought Amanda Lucas, the lightweight MMA fighter and Star Wars director George Lucas’s adoptive daughter, for the DEEP women’s open-weight championship. The fight is not so fun to watch: Hotta spent two and half rounds getting taken down and beaten up, looking lost on her back and somehow still trying to forestall the inevitable end. Aside from landing a few blows during sloppy exchanges on the feet and threatening with a guillotine choke from half-guard, by the time Lucas put her away with a keylock in the third round, Hotta looked every bit like a 45-year-old pro wrestler wheeled in to experience the pleasure of her own unraveling.

But it’s stupid to look too deeply into Hotta’s skills and deficiencies, since her fight with Garcia isn’t supposed to resemble sport. It’s an act of provocation, intended to shock and stupefy. It’s not even about some absurdist exercise in harnessing fame, something we are told Kandori possessed in spades because of her grappler-to-House-of-Councilors résumé and that Hotta doesn’t. Rather, Garcia versus Hotta is like putting a bug under a boot and waiting to see what color stains the ground.

For all the tumbleweeds blowing through MMA’s female ranks north of 145 pounds, there is—or, maybe, was—at least one credible New Year’s Eve challenger for Garcia. Katya Kavaleva, a 25-year-old, six-foot-five-inch Belarusian heavyweight striker who won a gold medal at World Kickboxing Championships and trains with the Blackzilians MMA team, had been calling for a fight with Garcia before the Kandori booking was announced. “We wanted this new years fight and they chose this lady who is 52 years old,” Kavaleva told WMMA Rankings, presumably via text message, “and even though she was a great champion this is more like a WWE event now and we wouldn’t surprised [sic] if Gabi losses [sic] to their Japanese legend.” (For all her criticism, Kaveleva, who looks like a female the WWE might court, says she is trying out for the pro wrestling promotion in February.)

So here we are, another opponent for Garcia provoking the same dilemma as the last. You’d almost admire Rizin’s hell-or-high-water commitment to the bad taste inherent in this match-up if there were a single redeeming question to be answered. There is one, I suppose: how much more righteous indignation do we have left to summon?

A Brief History of Shinobu Kandori