Game Breakers: Five Moves That Won Fights They Shouldn't Have 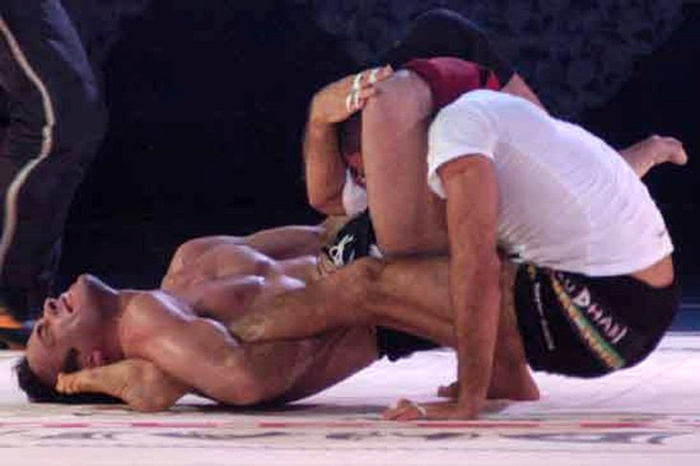 The underdog story is the only story as far as sporting cinema goes. As Wilt Chamberlain put it: nobody cheers for Goliath. But in the real world David rarely stands a chance. And nowhere is that fact more depressing than in the sport of fist fighting. When a sub top-50 seeded tennis player loses to Novak Djokovic he is applauded and goes away feeling good. Lose a fight as the underdog and you might be applauded, but you will get your butt kicked in the process.

The one thing which fighting does have to help the underdog is an abrupt end to proceedings. In any other sport you can pull off a trick play and pick up some points but you're there for the duration of the match and you can't keep surprising with out-of-the-box strategies forever. With the exception of Quidditch, wherein everything is rendered moot by the golden snitch—stemming from the need for a team game to come down to the actions of the book's protagonist—no sport provides the losing side with the chance to take the lead and end the match in one instant. In a fight, however, you only need to fool someone once if you do it just right.

Today I want to share with you a few of my favorite trick plays which allowed fighters with no chance on paper to take a very sudden and brutal victory in the real world.

Matt Serra and the Low-High

The low-high principle is day one stuff in the striking arts. You work the opponent up and down to draw and distract their focus. The best boxers in the world live and die by it, and the entire method that brought Dutch kickboxing to prominence is the use of the high-low principle to land punishing low kicks.

When Matt Serra met Georges St. Pierre, the idea of Serra winning seemed unthinkable. A legitimately brilliant jiu jitsu practitioner (he managed to give Terere a handful in no-gi competition) Serra gave up so much reach and striking ability to St. Pierre, and it seemed unlikely that even if he could get through the champion's reach, he would struggle with St. Pierre's brilliant wrestling.

Working with Ray Longo (who became the architect of two of the biggest upsets in UFC history) Serra refused to throw his right hand at anything but Georges St. Pierre's ribcage for the first few minutes of the bout. It's simple, but it's hard to get a fighter to commit to the investment when his opponent is trying to take his head off in every exchange. But Serra put the money in the bank and for every blocked St. Pierre kick he'd step in and swing at the body.

Three minutes later, when he finally uncorked a right hand to the head, St. Pierre's hands were nowhere to be found. The champion was sent stumbling and suddenly closing the distance was no longer a problem—GSP could scarcely hold himself up, let alone punish the challenger with jabs and kicks. Serra got the finish and with one of the simplest, bread-and-butter strategies in boxing, won the UFC welterweight title.

Peter Graham and the Rolling Thunder

When Australia's Peter Graham was signed to fight the young up-and-comer, Badr Hari in 2006, the two got off to a poor start. The ill will between the two men sparked a brawl at a press conference and the fight suddenly became must see TV. Hari was on the rise, having dispatched a laundry list of decent names through 2003, and avenging his only loss to Stefan Leko in his K-1 debut. Hari was already the talk of K-1 because he finished Leko with one of the most spectacular wheel kicks in kickboxing history. The kick still tops many of 'greatest knockouts' lists in the sport to this day.

Peter Graham was just a loveable brawler and against most of the classier kickboxers he had met he'd been made to look second rate. But he was always fun and with his background in Kyokushin karate he brought something the fans loved, the kaiten-geri or 'Rolling Thunder'.

The fight was as expected with Graham attempting to brawl and hitting nothing but guard, and eating hard kicks in return. When the two got in close, Hari used his cross-face to right hand to punish the brawler.

With fifteen seconds remaining in the final round and clearly losing the fight, Graham checked a low kick, flicked out a distraction with his right hand, and threw himself into the Rolling Thunder. The kick knocked Hari stiff.

Graham never won a bigger fight, and in the two rematches he had with Hari, he struggled to win even a minute of either. But in that moment, after the slog of an ugly three round brawl, the Rolling Thunder served as the perfect break in a monotonous pattern.

Eddie Bravo and the Jailbreak

When Eddie Bravo met Royler Gracie in ADCC 2003, Gracie was the man. A four-time world champion at featherweight in the black belt division, a three time gold medalist in ADCC, and the only time anyone had submitted him in black belt competition was Mario Sperry, a heavyweight. Eddie Bravo, meanwhile, was largely unknown.

When the two hit the mat, it was Gracie attempting to use his infamous knee slice while Bravo attempted to hold half guard. After Bravo achieved a brief sweep, and fought off a triangle attempt, Gracie forced the American back to guard. Finding no success with his rubber guard and being forced onto the defensive in his half guard, Bravo allowed Gracie to pass to his side, but used his hand to insert his own right butterfly hook. Performing what is now called the Jailbreak escape, Bravo drove back to butterfly guard, now with Gracie's hands on the mat. Bravo immediately used his hooks and overhook to set up a triangle choke and submit the Brazilian superman.

A rematch took place at Metamoris III in March of 2014 and Bravo got the better of a now 49-year-old Gracie at every turn. In spite of their advanced ages, this was one of the most entertaining grappling matches you'll ever watch as Bravo's creativity showed throughout.

Just last week, Uriah Hall found himself on the losing end of a grappling match in the first round of his bout with Gegard Mousasi. But when the fight returned to the feet, Hall nailed Mousasi in the head with a jumping back kick (a favourite from Chuck Norris' tournament karate days) as Mousasi was ducking.

Apparently Hall's camp had noted Mousasi's tendency to duck down when his opponents turned to do something unorthodox, and the aim of the kick was deliberate. Equally, it could have been a midsection kick which wound up hitting the head, as in the case of Renan Barao knocking out Eddie Wineland. Whatever the case, the kick turned the fight on its head and saved Hall from a bout he was decisively losing to that point.

Hinata Watanabe and the Triangle Kick

Hinata Watanabe was a respected Japanese kickboxer by 2010, but he hadn't really done much of note outside of the Japanese circuit. Artur Kyshenko, meanwhile, was considered one of premier kickboxers on the planet and is ranked #2 at welterweight, behind the great Nieky Holzken, today. Kyshenko's thunderous punching power, solid kicking game, love of going to the body and brilliant technical game all around made him a frightening prospect for any fighter at welterweight.

Coming straight off of a knockout loss and facing a top five ranked fighter, Watanabe did a decent job of making a fight out of it, but it was clear to anyone watching who the better fighter was. Kyshenko was crisper, his punches were beating Watanabe's to the mark, and each time Watanabe stumbled back to stance Kyshenko punished him with low kicks.

In the third round, however, Watanabe began to have success with snap kicks to Kyshenko's midsection. Sometimes referred to as the crescent kick (mikazuki-geri), the triangle kick (sankaku-geri) hinges at the knee and connects with the ball of the foot as the front snap kick does, but comes upwards on a forty-five degree trajectory. Hiding this kick between the round kick and the front kick, and particularly using all three interchangeably, makes the job of the defending man difficult. If his plan is to stand still and block kicks rather than move away from them, the triangle kick will quite easily wind a man.

Watanabe's snap kick sent Kyshenko down for the count and shocked much of the community who were largely unfamiliar with the effectiveness of snap kicks. Unfortunately, it happened on a RISE card so not many fans saw it. Watanabe has done little of note since, but handed kickboxing's new golden boy, Josh Jauncey one of his few losses back in November of 2013.

Cormier versus Gustafsson: What Makes a Champion

The Lost Round: The Thrilla in Manila Forty Years On