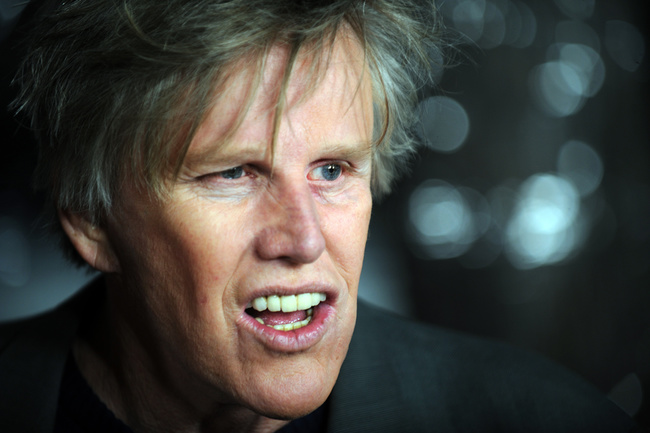 In an editorial for the January 1995 issue of Black Belt magazine, Executive Editor Jim Coleman listed a number of point-form observations he’d made while viewing UFC 3: The American Dream live on PPV. Among his many pointed notes on the broadcast was this little gem:

“During one of the several lulls in the pay-per-view broadcast, ring announcer Rich Goins conducted a brief interview with actor Gary Busey, who awkwardly attempted to analyze the proceedings. A smaller name, but perhaps a wiser choice, would have been an interview with actor and former kickboxing champion Don (The Dragon) Wilson, who was sitting several rows behind Busey, chomping at the bit for an opportunity to offer some on-camera insights.”

Wilson might have been the better choice in terms of actual martial arts insight, but Busey’s appearance had far greater historical implications. It kicked off two traditions that are still going strong over two decades later: celebrities appearing at UFC events and Gary Busey talking about martial arts in a way that only appears to make sense to Gary Busey.

According to Busey, who appears to be the primary—and maybe sole—source on the subject of Gary Busey’s martial arts background, his interest in combat blossomed while he was was filming the 1987 action classic Lethal Weapon. As part of his preparation for the film’s big fight scene with his co-star Mel Gibson the high school football prospect-turned musician-turned actor was introduced to a number of different martial arts.

“We had four martial arts going,” Busey said in a 2008 interview. “Taekwondo, capoeira from Brazil, Brazilian judo jiu jitsu, and jailhouse rock, a martial art created in prison for fighting in close quarters.”

He was impressed with both the techniques and the philosophy that he gained from the experience.

“The ambitious discipline, the follow-through, the focus it takes to make that work builds a champion of everything that is a part of you.”

Busey has also shared versions of this origin story with Black Belt TV, and Alfred Kendrick’s Capoeira organization, who took the actor under their collective wing when he began showing up at their Sunday events at Santa Monica’s Muscle Beach.

The crash course that Busey and Gibson received, which involved trying their hands at all four martial arts in the four weeks leading up to filming, clearly paid off. The final fight scene between Busey’s Mr. Joshua and Gibson’s Martin Riggs is an effectively gritty street fight spiked with just enough flourishes to keep things fresh and exciting for a mainstream audience not yet attuned to the artistry of capoeira or the human chess elements of jiu jitsu.

It’s unclear what, exactly, Busey decided to with this knowledge once he finished filming the original Lethal Weapon. He did continue to appear in a number of fight-related films, including 2003’s The Prize Fighter, 2007’s Blizhniy Boy: The Ultimate Fighter (which also featured David Carradine and fighter-turned-actor Cung Le) and 2011’s Beyond The Ring (starring TKD master Andre Lima, and also featuring The Karate Kid’s Martin Kove). And, of course, he attended UFC 3.

In the earlier part of this decade, around the time that his bizarre appearances on Celebrity Big Brother (seasons 4 and 6) in the UK started making waves, an interesting fact found its way into many articles on the subject: Busey is a black belt in multiple martial arts. According to The Mirror and The Radio Times, the star, now 71, holds black belts in budo-jujitsu, capoeira, hapkido and kendo. According to his IMDB page, he also holds a black belt in Jailhouse Rock, an impressive feat, given that the hybrid penal-based discipline, also known as 52 blocks does not have the most well-documented grading system. Or well-documented existence, for that matter.

Given that at least some these reports appear to originate with British tabloids, an institution that has never been particularly well-known for its hard-hitting, fact-based reporting, it’s probably best to take this information with a grain of salt. But whatever time Busey has actually put in on the mats, and whatever rank he’s actually earned as a result of those hours, one thing is clear: he’s at least benefitted from the philosophy behind his various martial arts adventures.

He elaborated on that view in a promotional video for Beyond The Ring the following year.