Georges St-Pierre Should Be Returning to the UFC Soon 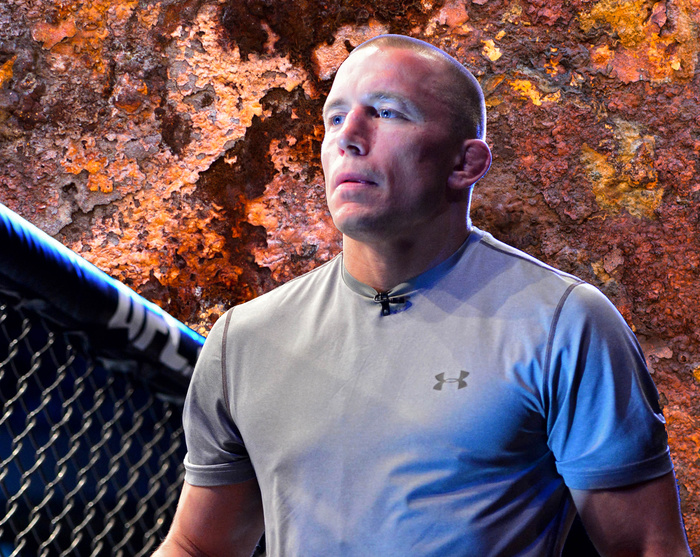 You have to feel for WME|IMG.

Back in July the mega talent agency purchased the UFC for a whopping $4 billion, confident of the promotion’s continuing upward trajectory, and now, just seven months later, it finds itself in possession of a sports league that doesn’t have a superstar. The biggest mixed martial artist ever, Ronda Rousey, is a ghost after two knockout losses. Her heir apparent, Conor McGregor, is off hunting for a boxing match with Floyd Mayweather, his very own white whale. Jon “Bones” Jones is still not back from suspension. And Brock Lesnar, whose MMA career was essentially over years ago, just notified the UFC of his retirement yesterday. Currently the UFC is a phenomenon without a face.

But like American progressives finding some small hope in the recent visit of Canadian Prime Minister Justin Trudeau to the handshake terrordome that is the White House, MMA fans too can now look north for their salvation. This morning MMAFighting.com reported that the UFC and Canadian star Georges St-Pierre are close to finalizing a deal that would bring the former welterweight king and MMA golden child back to the Octagon. According to the report, GSP is close to signing a multi-fight deal with the promotion that would see him fight for the first time in three years sometime in the third quarter of 2017.

Rumors about GSP’s desires and demands and status as a free agent and about repeated stalled contract negotiations between the former welterweight champion and the UFC have been ongoing since St-Pierre abruptly vacated his title following a bruising, controversial win over Johny Hendricks at UFC 167 in November 2013. Since then GSP has appeared in Hollywood movies and as the host of a TV show about dinosaurs and even occasionally in the MMA rumor mill, but his presence has been spectral at best. Last June when the fighter first announced he was ready to come back, negotiations with then owners Zuffa stalled and UFC President Dana White declared that GSP was “done” and “retired” and would “not fight again.” For some reason we believed him.

Then there was the little matter of GSP showing up on a conference call late last November as one of the founding members of the newly announced Mixed Martial Arts Athletes Association, a group (not a union!) of UFC stars advocating for fighter pay, benefits, pensions, and other prominent and long-lingering rights. During that call GSP sounded like a man free from concerns about retribution from White or the UFC, saying the association would fight for all fighters not as fortunate as he’s been financially and that he would be leading the charge. Since that call we haven’t heard much from or about the MMAAA, but it will be interesting to see if GSP’s new contract includes any language advocating for, as he called them at the time, “all fighters who get bullied and intimidated, who are afraid to retire or get fired, or get left broken, with brain injuries and trauma and no care.”

Now that it looks like GSP is finally coming back into our lives the question becomes who a man like that fights when he does. When you’ve got a star of St-Pierre’s magnitude returning after three years to a promotion desperate for star power, surely you can’t just dump him into some meaningless fight. You’ve got to find him a match with meaning, or at least pizazz, and preferably both. If he returns to the welterweight division, which is currently sorely lacking in star power and drama, only a title shot would do. As much as I love Demian Maia and Robbie Lawler, a number-one contender fight between one of them and GSP just wouldn’t bring the kind of juice WME|IMG needs. A fight with GSP protégée Rory MacDonald would have worked but Macdonald has moved on to Bellator in his master’s absence. Which leaves either a move up to middleweight, where champion Michael Bisping has already said he’d happily wait to defend his title against GSP, and where GSP bête noire Hendricks now resides (perhaps GSP would like a little redemption to go along with his resurrection?), or super fights. For nearly a decade MMA fans have been dreaming about a fight between St-Pierre and fellow aughts superhero Anderson Silva. And while the fight may not have the urgency it had, say, five years ago, when the two men were unbeatable and locked in a perpetual struggle for the top spot of the pound-for-pound list, surely no fight would sell more tickets, even in 2017, even when GSP is 35 and Silva is 41, than that one. The UFC and its new owners are in desperate need of magic beyond the petty concerns and demands of the pundits and the ranking list-makers, and GSP vs. Silva would make even the most jaundiced fan believe in something. Now is the time for giants, no matter how old or covered in ring rust they may be.

We Asked Some UFC Fighters About GSP's Love of Dinosaurs