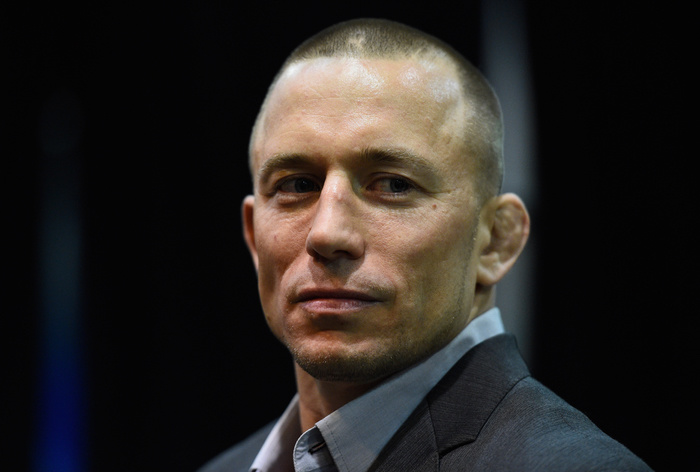 If you had any lingering doubts that the era of big-money fights that exist entirely outside the realm of rankings or reason is upon MMA, you can officially let them go.

Today on ESPN’s SportsCenter UFC President Dana White announced what could prove to be the biggest and strangest money fight of them all: When former welterweight champion and pound-for-pound great Georges St-Pierre makes his long-awaited return to the Octagon, white said, he will do so at middleweight, and the man he will return to fight is none other than middleweight champion Michael Bisping.

Yes, GSP was a long-running dominant champion and one of the best fighters to ever put on a pair of tights, and yes, he was arguably the biggest star the UFC ever had before Ronda Rousey and Conor McGregor kicked off MMA’s Crossover Era and Big Money Era, respectively, but it’s still remarkable to think that after more than three years away from the sport (much of that time spent at loggerheads with White and other UFC officials and some of it as the most vocal charter member of the Mixed Martial Arts Athletes Association, the “not a union” created to push the UFC on issues like fighter pay and pensions) anyone, even Georges St-Pierre, could waltz into a championship fight his first night back—especially a championship fight in a weight class he’s never fought in and whose line of succession is both particularly heated (say whatever you will about Michael Bisping but everyone wants to fight him, everyone thinks they can beat him, and everyone knows fighting him will make them rich) and has already been muddled by one surprise big-money superfight of questionable meaning: Bisping’s controversial win over longtime nemesis Dan Henderson, who was nowhere near the top of the rankings when the two men fought in October.

It’s all so strange to even think about. It’s already strange that Michael Bisping is the middleweight champion and it’s strange that Georges St-Pierre, who spent part of his sabbatical hosting a TV show about dinosaurs, is coming back to the UFC. But the idea that these two men—one of them 38, the other 35—will be fighting each other, and for the 185-pound title no less, at a time when Yoel Romero, “Jacare” Souza,” and Chris Weidman are alive in the world, is a source of true wonder. I’m sure that’s not the word Romero, Souza, or Weidman would use to describe the situation, but even they must realize that when you have a sport like MMA thatis still lingering right outside the realm of mainstream, deep-down-in-the-culture, widely beloved, money-printing status, begging to be let in, and where every decision has to be made with a view toward finding a way to cross that line, of finally getting over that damn hump, concerns like fighter’s feelings or matchmaking legitimacy are going to take a backseat to promotional fireworks every time. And the fact of the matter is Michael Bisping on his own could sell a fight better than those three contenders combined (Bisping was McGregor when McGregor was just a plumber’s apprentice in Dublin) and that stars don’t come a whole lot bigger than GSP. So once again the demands of economics have taken a hand in MMA.

You may not like the sport’s Big Money Era and you may not respect it and you may even doubt its legitimacy, but until the day come when MMA finally climbs that mountain and is able to stand at the top alongside the NFL and the NBA and Major League Baseball, that’s probably the era we’ll be living in. This is American self-promotion at its purest: bark and shout and make a spectacle of yourself until you reach the point where you can sit back, relax, and take your rightful place among the legitimate and the rational and the sophisticated.

No date has been announced for Bisping and St-Pierre’s fight yet but it will likely be at least several months because GSP has to put himself in the U.S. Anti-Doping Agencies testing pool.