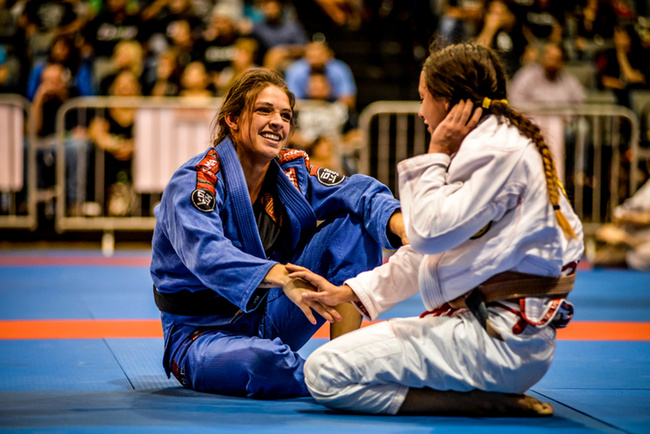 Last weekend, Mackenzie Dern won her first black belt world title at this year's No-Gi World Championships. Only 21 years old, it's quite a feat, even considering the years of hard work and dedication to a sport rooted in her family's traditions.

Dern was born into the renowned Gracie Humaitá team. Her father, Megaton Dias is a world champion himself, and was an early pioneer for the team. For Dern, BJJ was never even a conscious choice, growing up in the academy was a natural part of her life.

“I couldn’t be any happier that he’s my Dad because everything I have is from him through jiu jitsu. He has an academy, so my life has always been jiu jitsu. From three years old he used to bring me to the academy, and even from that young I kind of started picking up things. Listening to him teach got ingrained in my head, and when it was my time to learn techniques, I felt like I already knew them.”

Dern’s most notable match from the tournament came in the finals of the open weight class, where she faced off against IBJJF hall of famer Gabi Garcia, who outweighs Dern by nearly 100 pounds. “Yeah we looked like a little kid and a big adult (laughs). I’ve fought her twice, and I just really want to beat her. No offense to her, but I want to be the best, that’s my goal. I see people fight her, and sometimes their goal is just to last the whole ten minutes with her and not get finished.

“Like they will lose, but be happy they didn’t tap. I just can’t think like that, I’m here to win. That’s what’s different and that’s why people liked our match at No-Gi worlds. People are watching and talking about those finals because they want to see people go out and try beat her.” 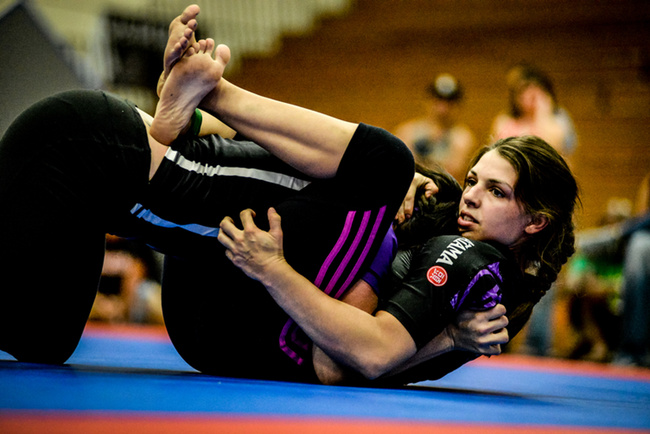 Dern’s strategy was apparent, aggressive from the get go—she caught Garcia in a guillotine, before locking up a triangle. Ultimately falling to Garcia’s strength, Dern remains confident that she’s developing a strategy against the great puzzle of women’s BJJ. “When I’ve fought her, any time I’ve given her space or room to think is when it starts going bad for me. I figure you have to pressure and make her focus on defense.”

“Their switching it up lately, a lot of it seems to be MMA vs. BJJ and I’d be up for going against an MMA girl like Miesha Tate, Cat Zingano or Ronda Rousey. I think for Metamoris, who bring in so many eyes to BJJ who don’t even watch BJJ, I think it would be cool for them to see me as a smaller person beat a bigger person. I hope they don’t fall away from doing girl matches."

With the high amount of matches required to win a major IBJJF tournament, Dern enjoys the idea of preparing for just one person in a super fight format. For her mental and physical game however, the value of a major tournament shines through.

“I’m trying to be the best version of myself. That means I have to use all my tools and strategies to win. You can’t just have a one size strategy to beat these girls when you compete at the worlds. Now, as a black belt I feel comfortable anywhere. Mentally, I know I’ve seen it all before. In training I’ve been in so many crazy situations, a match is nothing new.” 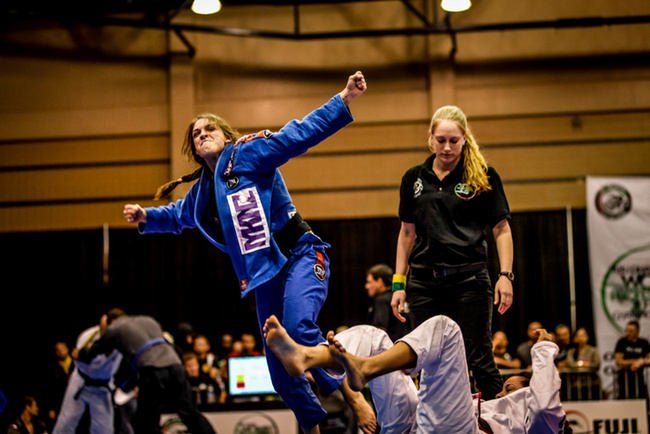 Competing at Copa Podio in a couples match is a story Dern enjoys telling, as she wound up a hero by saving her boyfriend, world champion Augusto Tanquinho Mendes. “Yeah we did the first couples fight against Luiza Monteiro and Leandro Lo. It was so crazy for me, because Tanquinho fought the first half. So I’m there watching, trying to focus on myself and stay composed. We were never expecting Leandro to pass his guard so we went a few points down.”

“Like this was my first fight at black belt, it was for Copa Podio on PPV and I was like ‘yeah, well thanks baby, were down 5-0’. Once he was done, we couldn’t talk, I had to go straight in, like he couldn’t even say sorry! But it really motivated me, I felt like I had nothing to lose. When we got that prize money, for sure it was 75% for me, 25% for him. I mean I had to save him!"

The two are planning to compete for Copa Podio again, although Dern has seen the unpredictable side of mixing romance with competition. “Couples though, it gets pretty crazy. The first couple we were meant to fight broke up right beforehand, then the couple we actually fought broke up afterwards!”

In MMA, women’s competition has exploded in popularity with the advent of Ronda Rousey and more recently the interest in the 115lb class. Women’s jiu jitsu meanwhile is experiencing a period of growth, yet still seems to hold a certain stigma.

Dern has grown up in the women’s competition circuit, and she has her own thoughts on the state of women’s BJJ. “I think people outside the sport see us and put us way higher than our own people in the sport do. I understand the women’s divisions aren’t as deep, but women’s BJJ is growing hugely. There are so many women at brown belt that are going to swell the black belt ranks next year. Women in our sport work incredibly hard for what we’ve achieved, and it’s incredibly demeaning to hear someone say I get sponsorships because of my looks.” 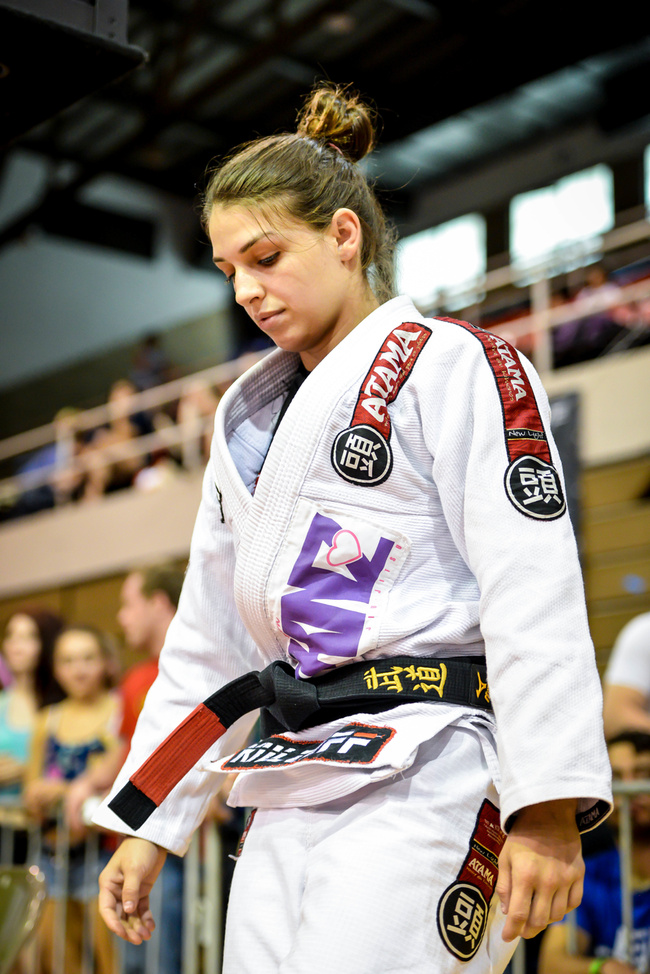 The way women see the sport also needs to make a dramatic change, and Dern hopes educating the masses can break down the gender barrier often associated with the sport.

“I think it’s important that we show women’s BJJ for what it is and what it can be. It doesn’t have to be some crazy masculine sport. If your male friends or boyfriend is training, you shouldn’t feel intimated to go train with them.”

In regards to the root cause of the stigma that is felt toward women’s BJJ, Dern believes it’s a side effect of the innately masculine idea of fighting. “I think it all comes back to the idea of a woman fighting. Like you see it in MMA. People look at Ronda Rousey, they see how beautiful she is and their just shocked that she’s a fighter. They’re so impressed at the idea of her wearing a dress and being pretty and not being all beat up looking.”

“I think it just follows through with jiu jitsu, where people are so used to seeing big manly displays like when Roger broke Jacare’s arm. And you have to remember: for a girl, it’s pretty scary to walk into a gym and start training with men. I think it’s important that women see that jiu jitsu doesn’t have to change how you look or how you dress. Jiu jitsu can do so many amazing things for you, and hey, if you still like looking pretty, that part doesn’t have to change at all.” 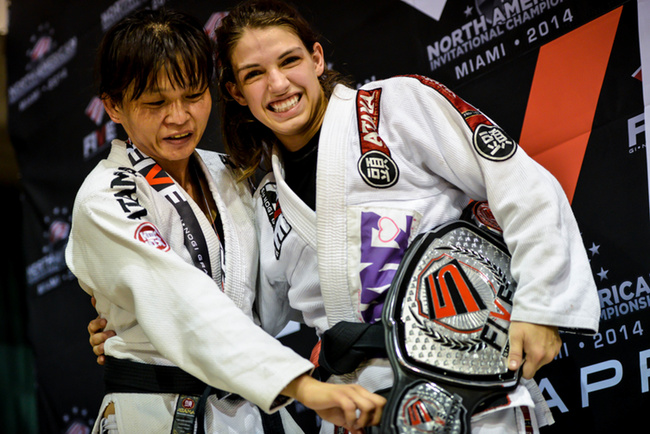 Dern as an athlete has set herself step goals to achieve in the sport. She’s achieved tournament success throughout her life, but is conscious of being just another world champion in the eyes of the sport.

“I just don’t want to be one more person. Winning the worlds is awesome, but I want to win the most black belt world titles, I want to be like Rafa Mendes and Cobrinha, hunting for a spot in the hall of fame."

For Dern, as a female athlete in a rising sport, however, there is a genuine sense that she can do more than win medals. Dern wants to actively be a part of a change in how the community sees female athletes, and how they see themselves.