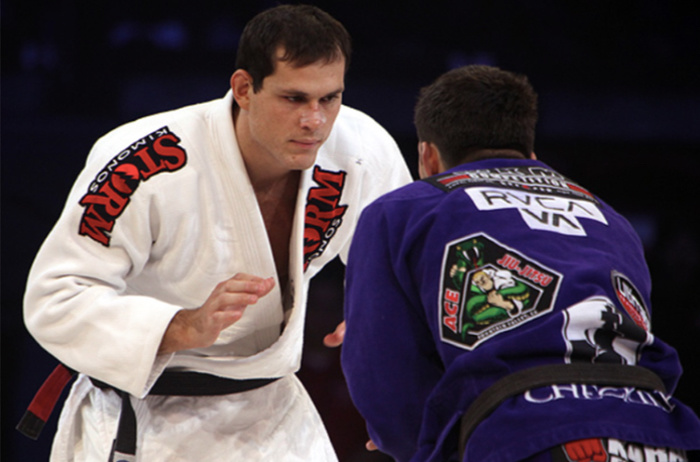 Roger Gracie left the sport of competitive jiu jitsu as perhaps the best who ever lived. Certainly in terms of accomplishments and accolades it is hard to imagine anyone will match Gracie's any time soon. Gracie achieved an incredible ten gold medals at the Mundials—the IBJJF's world championship—at under 100kg, over 100kg and in the Absolute division, winning two divisions in his 2007, 2009 and 2010 showings. Gracie achieved the same double gold medal in 2005's ADCC, the most prestigious no-gi contest in grappling. When he retired from Jiu Jitsu after his tremendous 2010 to focus on his mixed martial arts career, the BJJ world tried to move on but every heavyweight who popped up was inevitably placed into the hypothetical Gracie matchup for 'when Roger comes back'.

At six foot four, and comfortably over two hundred pounds, Gracie was a powerhouse. His style has always lacked flash and was 'basic' but never simple. But as understated as his style and manner were, the stories about his strength and ability in the gym were outlandish. Robert Drysdale was surprised by Gracie's strength in the finals of the 2007 Mundials. With a firm grip on Gracie's collar, Drysdale figured there was no way that Gracie could strip his grip.

In 2012, Gracie returned to grappling competition for one night only at Metamoris 1. Metamoris was founded by Ralek Gracie and hosted a series of submission only super fights. One of these was to claim a bizarre moral victory for the Gracie clan by having Ryron Gracie survive the full twenty minutes underneath Andre Galvao. The other matches were also decent but the main event was between Roger Gracie, and the new heavyweight Jiu Jitsu sensation, Marcus 'Buchecha' Almeida. Buchecha was considered part of a 'new breed' of grappler, a heavyweight who utilized inversions like a much lighter guard player. But while Almeida was considered the faster, flashier, turn-upside-down grappler, he also had fifteen pounds on Gracie come fight time.  Also, unbeknownst to everyone but his camp, Gracie was apparently suffering from illness in the days up to the bout. What followed was one of the most exciting heavyweight matches in the gi to ever be caught on film.

Buchecha surprised Gracie with an early a takedown and stood over the ten time world champion so as not to get sucked into Gracie's famous closed guard.

Gracie established a De La Riva hook briefly before sitting up and attempting to pass Buchecha's sleeve underneath his own leg in order to look for a sweep. Gracie failed to secure the grip and ended up turtled while sitting on one of Buchecha's ankles. In what would become a theme throughout the bout, rather than attempting to recover his guard, Gracie stood up and broke away from Buchecha. Later, Gracie would attempt an arm roll sweep from the same position.

Gracie attempted to jump to his closed guard, but Almeida succeeded in getting a knee in though Gracie was able to close his guard around the knee. Roger Gracie has had tremendous success in sweeping opponents even once they have gotten a knee through the middle of his long legged closed guard.

But Buchecha's balance was on point. Underhooking Gracie's ankles, he was able to slide his hips through Gracie's guard and dive onto a kneebar. This would be a position which Buchecha would repeatedly utilize throughout the bout, not just as an attack on the knee bar but for toe holds and sweeps.

Gracie was able to fight off the leg attacks and take top position inside Almeida's half guard, attempting to flatten Almeida out and remove his knee shield before backing off and attempting to pass again. Again, Almeida's flexibility and mobility troubled Gracie as Buchecha was able to invert once again and get a leg between Gracie's, coming just short of performing a tornado sweep. This time Buchecha wound up in the turtle.

Sensing a moment of relieved pressure, Buchecha attempted to granby back to guard but was flattened into side control.

This was the first truly dominant position of the bout and one from which Gracie had been a powerhouse in competition. Ordinarily Gracie would put shoulder pressure on his man, blocking their hips on the far side with his elbow and 'walking' their hips towards that side until he could underhook their near leg while their shoulders were still flat to the mat. From here he would scoop his body underneath their near elbow and open it away from their body, giving him a much more powerful position from which to attack or mount.

Buchecha seemed to stifle this by gripping one of Gracie's pant legs and threatening to push it back into half guard. As Gracie brought his knee over Almeida's biceps to break the grip, Almeida exploded up to the turtle. From here he inserted a sneaky hook and rolled through into another tornado sweep attempt, this time managing only to recover closed guard.

The battle from closed guard was where the two men got a breather, having worked at a frantic pace for ten minutes already. Buchecha would underhook a leg and threaten to roll over his shoulders to force a leg attack and Gracie would thrust Buchecha's gi into his throat until he took his hand out from underneath Gracie in order to do something about it. Buchecha would show touches of the more understated guard game that made Gracie famous, going two-on-one on Gracie's left arm and threatening a Roger Gracie style arm drag. Gracie has always recognized the value of attacking the left side because it is the weaker side in the majority of the population.

As Gracie was able to open Buchecha's guard and flatten the youngster out in butterfly guard, he began to look for his usual passes. Often Roger Gracie is able to drive one pant leg down, use lateral movement to cross his opponents hooks and post on his head as he kicks his one hooked leg out behind him and slides over the guard. Dan Lukehart made a brilliant instructional on this pass and other elements of Gracie's game.

But Buchecha, perhaps by timing the sweep well, perhaps by being a longer man who could continue to apply lift to Gracie's hips much higher than many of his previous opponents, was able to sweep Gracie successfully for the first time, landing in Gracie's guard as the old timer attacked a razor armlock.

Up to this point, Buchecha had proven himself a test for Gracie. But it was in the last two minutes that Buchecha would grab the jiu jitsu world by the scruff of the neck and have their hearts pounding. As Gracie stood to break Buchecha's closed guard once more, Almeida underhooked a leg as if to roll to a kneebar/tornado sweep position once more, but instead let go and used a De La Riva hook and cross grip to roll into a berimbolo, coming up on top to threaten the back before stepping over the head to roll for an armbar in a beautiful series of techniques. The berimbolo game was something which Gracie had avoided throughout his career by often passing guard from a low position rather than a standing one.

Gracie was able to clear the legs from his face and even while his arm was isolated and extended, Gracie was eventually able to squirm free and come up on top. Moments later the clock hit zero and the bout was ruled a draw.

The rematch between Marcus Almeida and Roger Gracie has been a dream fight ever since the end of the first. Was Gracie ill? Did he underestimate Buchecha? What can Almeida change based off his successes in the first bout? Was it the case that—as with Jon Jones—Gracie struggled to force his game on men of similar length and height. That old school – new school match up was even more exciting and pronounced in the flesh than it looked on paper. Metamoris actually announced the rematch between Gracie and Almeida as the main event of Metamoris 7, before Almeida himself announced that the bout was not happening and that it had not even been signed when Metamoris began advertising it. While Gracie is pursuing his MMA career in ONE FC, we can only hope that some savvy promoter puts together a tempting enough offer to lure him back for a rematch against Buchecha.

Metamoris 'The Underground': Portraits After the Fight

Metamoris 6: Portraits After the Fight