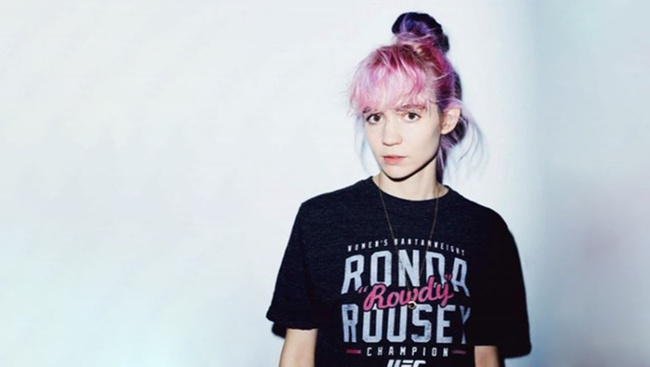 There's nothing particularly unusual or noteworthy about a pop star who loves MMA in 2016. Mandy Moore has been a fixture at UFC events since the mid aughts—and even the source of some apparently unfounded GSP-related rumors—and Demi Lovato became a frequent attendee not long after that. Lady Gaga has been known to toss out of the occasional fight-related tweet, too. But there's something not quite usual about Claire Boucher and her alter ego Grimes' incredibly intriguing public fascination with the sport.

The indie noise artist behind one of 2015's best pop album, Art Angels, is actually perfectly suited to MMA when you think about it: much liker her own work, the sport embraces both the brutal and the beautiful. It's easy to see how its clash of brute force and meticulously studied technique would be uniquely appealing to her. And if she is, as the gom jabbar she occasionally wears would suggest, a Bene Gesserit, it's likely that she has a bit of a martial arts background of her own. If that's the case, her experience with The Weirding Way could also contribute to her appreciation of the discipline.

Whatever it is that originally appealed to her about MMA, though, what she might do with her love of the fighters is even more interesting. As the New Yorker's Kelefa Sanneh noted in his September 2015 profile of the musician and visual artist, she has a "knack for pulling unlikely influences into her aesthetic world." She both literally and figuratively wears her enthusiasms on her sleeve, sporting t-shirts by such unlikely sources of inspiration as the Dixie Chicks, and sharing photos of her favorite books of the moment on her deservedly popular Instagram account. As of late, many of those shirts and posts have taken on a decidedly MMA-centric theme.

She's posted multiple photos and video of herself in multiple Ronda Rousey shirts, and a photo of Rousey's book, My Fight/Your Fight—next to Benazir Bhuto's Reconciliation—with the caption "Inspiration." She's even posted a shot of her reading Rousey's book while wearing a Rousey shirt. She wore one of those shirts in the pages of Future Music Magazine, and namechecked My Fight/Your Fight in an interview with Noisey. She declared both Rousey and Bethe Coreia "hard as f," and has expressed support and interest in Invicta FC champ Cris Cyborg as well. In the fall, she declared that "Omg Ronda rousey is my idol I want to slay in coliseum and retire to Warcraft and audacious mug I am dying to see her on jan 2 fight vs holm, if I can go I will cease to exist." Earlier this week, she called UFC strawweight champ Joanna Jedrzejczyk her style icon (and I'd argue that you can see shades of Jedrzejczyk vs Penne in her video for "Flesh without Blood/ Life in the Vivid Dream"). 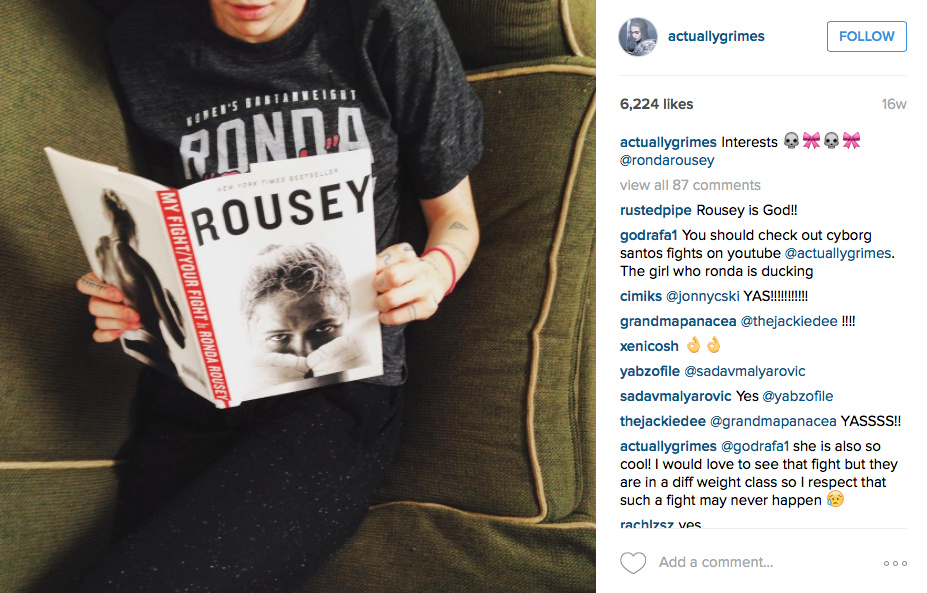 Boucher’s various aesthetic obsessions have made for some brilliant and fascinating music over the course of her career, from her first album, the Dune-heavy Geidi Primes, to the Art Angles track “Kill V Maim,” which came out of a Godfather fixation, so there’s a chance that all of this could lead to some MMA-flavored music in the future.

I hope it does. Unlike other, older combat sports—boxing in particular—mixed martial arts has yet to truly capture the imagination of the art world. A handful of visual artists have flirted with the sport. The Fighter and Warrior had a fair amount of success in bringing it to the silver screen. But that’s about it. Even the poets who unabashedly love MMA seem to have little interest in taking it on as a muse. Which is a shame, because mixed martial arts, in all of its drama, its heartbreak, and its triumph, is filled with artistic potential. If we’re lucky, maybe Grimes will be the first high profile artist to tap into that potential.

In the meantime, it would also be nice to see more MMA fighters embrace her music. Patrick Cummins sure looked and sounded good when he walked out to her “Oblivion” at UFC 190 and he was rewarded for his excellent musical taste with a TKO win.