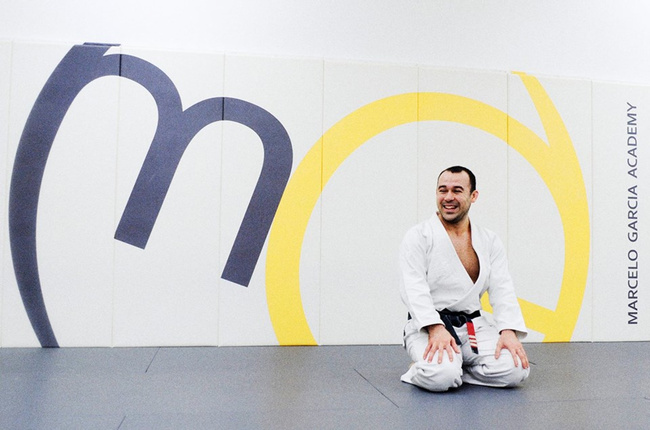 [Several and distinct fighting styles make up the sport of mixed martial arts. Its best and most well known athletes have built their knowledge on the shoulders of not only their fellow mixed martial artists, but also on the shoulders of jiu jitsu stylists who have contributed to the overall evolution of the sport. In our new editorial series Ground Play, we look at some of the most important grapplers of our time—those who have never graced the UFC Octagon, but deserve to be just as much of a household name as MMA's top talent.]

Marcelo “Marcelinho” Garcia, five-time world champion and four-time ADCC champion, is perhaps the pound-for-pound best jiu jitsu fighter of all time. He’s one of the most dominant competition grapplers ever. So great, in fact, that you would expect him to be met with far more mysticism and awe. If his last name were Gracie, he might as well be the Second Coming of Christ—Marcelo Gracie, Brazilian jiu jitsu’s Jesus.

But he’s not a Gracie, and his charisma and welcoming demeanor have made him one of the most approachable icons of jiu jitsu. And he hasn’t held anything back, publishing multiple instructionals while developing one of the most sought after academies in the world.

While in town for the Fightland Launch Party last year, I attended a noon class at his main facility, the Marcelo Garcia Academy. I didn’t call ahead, and was pleasantly surprised to see that Marcelo, and not one of his instructors, was teaching when I strolled in.

The mats stretched the length of the third floor of a nondescript building in the center of Manhattan. The mat was packed, with over 30 people training in the middle of a workday. I was immediately welcomed, and jogged around the room during the warm up while looking down at the streets of New York. 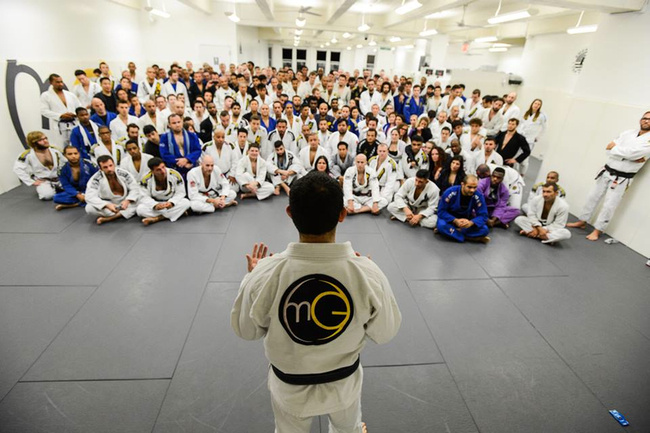 Marcelo is known specifically for developing a fluid and quick open-guard game. During the last decade, his arm drags and sweeps from the bottom were taught in schools all around the world, regardless of affiliation. After taking the back or the top position, the Brazilian expert highlighted the North-South choke and the guillotine from the mount.

One of the most insane things about jiu jitsu is that there’s no limit to how well movements and techniques can be perfected. You can train for 10 years straight, feel like the toughest fighter in the planet, but there will always be an army of people out there who can make you feel like you never took a jiu jitsu class a day in your life. That is to say that the same triangle choke you learn on your first week on the mat, can be honed and tweaked an infinite amount of times—all the while getting better, stronger, and more effective.

During Marcelo’s rise in the jiu jitsu ranks, he showed everyone that a very straight forward, well timed, and perfected game will dominate everyone. It gave rise to this idea that someone could develop a game all their own, that was not necessarily what everyone else was doing, and thrive.

Marcelo Garcia defines this inspiring and soul-crushing characteristic of jiu jitsu. He’s not doing anything everyone hasn’t already learned. He just understands the idea and theory of that particular movement in a deeper way, and is adept at articulating that understanding in practice.

He taught the arm drag and guillotine that day, naturally. It’s both strange and inspiring to casually drop in, and find Marcello still training the very same techniques he’s known for—still elevating them to new heights. Not unlike any other artist, a martial artist is often times eccentric and obsessive. I’ve found that the best fighters in the world tend to be as inspiring as they are tragic.

The Marcelos of the world make it possible for UFC fighters to so easily adopt the strategies that take lifetimes on the mat to build. Like legendary musicians “before their time,” less known jiu jitsu players create the standards and genres that students riff off of all over the world.

Joel Tudor on the Art of Surfing, Fighting, and Style