Growing Up With Luke Rockhold as Your Little Brother 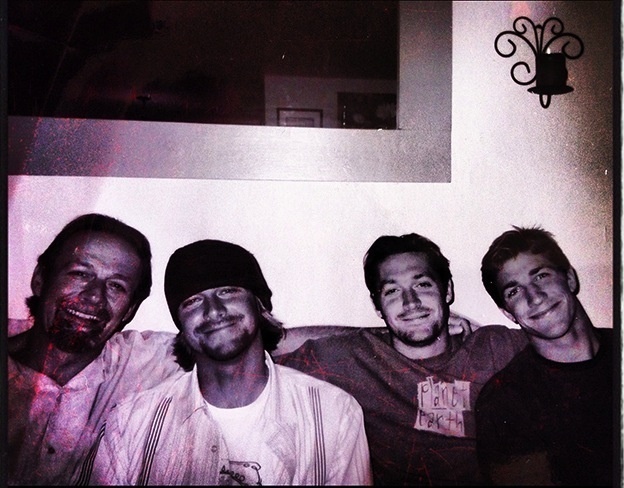 Luke (far right) and Matt (second from left) with their father, Steve, and brother, Nate.

Twelve people know what it’s like to have Luke Rockhold stare at them from across a cage. But what about before he was a UFC middleweight, a Strikeforce champion, or even another barely known MMA fighter on the regional circuit? What was it like when he was a scrawny kid staring at you from across the kitchen, ready to put his hands on you before it came time to eat?

Matt Rockhold knows. Matt is Luke’s older brother, the second-oldest child of Steve Rockhold, a basketball player who spent a season with the Golden State Warriors. Matt makes his living in the water: He began his pro surfing career as a teenager, carving out a name for himself on the Airshow Series by pulling off skate-inspired acrobatics above the wave’s lip, making magazine covers and top-10 rankings along the way. “It’s funny because, early on, Luke was my brother,” Matt says, “and now I’m his brother.”

Matt Rockhold: My dad was a big guy. Huge hands. He’d say to Luke, “If you do that”—whatever it was he didn’t want him to do—“you’ll get a spanking.” Luke was 4 years old. I remember thinking to myself, "I don’t want a spanking from my dad, and I’m frickin’ 10 years older than him." Luke would think about it for a second, he’d do whatever he was told not to do, he would get his spanking, take it, and just walk away. I didn’t do that. Luke was gnarly—he was definitely on another level, like, “You know what? I can take that spanking. It ain’t shit.”

Luke liked to challenge me at a young age. It didn’t take anything—we could just look at each other in the kitchen, and we’d have a little wrestling match and rearrange the furniture. The only reason I could beat him is because I was stronger than him, you know what I mean? Luke was actually the smallest one of all of us for a long time. We’d give him a hard time, like, “You’re never gonna be as big as us. Are you sure you’re a Rockhold?” And that would set it off. Then all the sudden, the kid’s looking you straight in the eyes and he’s 10 times stronger than you.

I think it was a Memorial Day sale at a surf shop. I wasn’t there, but, of course, I get the phone call two minutes after it happened. There was an older guy, probably about my age, maybe a little older, and he was picking on one of Luke’s buddies. And Luke was that guy, if someone fucked with one of his friends, he was the one to back it up. Luke basically picked him up, slammed him on the ground, and proceeded to beat him up—a guy that was probably 12 years older than him. I got a phone call about it, and then probably 10 minutes later, Luke shows up at my house. When he slammed him on the ground, he hit his head, so he was all bloodied and skinned up. I’m like, fuck. I contacted the dude and smoothed it out, squashed everything, because I actually knew him fairly well. It was pretty funny because five years later, these guys were friends and training jiu-jitsu together.

That happened quite a bit—I’d hear secondhand about most of his fights almost immediately. I fought plenty when I was younger, but hearing about your younger brother, you’re like, “Dude, what are you doing?” Luke’s arch-nemesis, the guy he wrestled against in high school and stuff, got stabbed and killed at a party. That stuff was always in my mind. “You shouldn’t be fighting guys at a party at 2am.” I just cared about him.

Luke even lived at my house for a few years, trying to figure out what he was going to do after high school. I had always had a successful surfing career, and he was at that stage where he was great at jiu-jitsu. I remember having conversations with him, like, “What are you gonna do? This is a time when you’re becoming a man. You need to either go to school, have a full-time job, or pursue your dreams.” His background being what it was—he was a wrestler, he was a world champion in jiu-jitsu—he was a fighter.

One of our buddies who was a family friend as well, Bobby Southworth, was on the first Ultimate Fighter show that had just come out, and it was kind of blowing out. He had the opportunity to go check out American Kickboxing Academy, and it’s kind of history from there. I was by his side the whole time, going, “Hey, you should pursue this. This is a chance to make a living with your body, to be a professional athlete.” I was backing him the whole way. To this day, it’s almost like I feel like I’ve got a fight coming up whenever Luke has a fight. I’m thinking about it everyday, talking to him and making sure everything’s all good. I get butterflies. I take it 110% personally.

In his first few fights, I’d help him cut weight—you know, Albolene him down and scrape him off with a frickin’ credit card. And after every fight, his mom makes him an ice cream cake—after every fight, he gets to enjoy that. And the funny thing is that the cake always goes back to his house, but when it’s halfway done, it always ends up in my freezer. I always end up finishing it.

When he knocked out Keith Jardine, that was kinda gnarly. I was sitting front row, and after he knocked him out, I was grabbing the cage and shaking it. Then I was like, “What the fuck am I doing? I’m gonna get thrown out of here.”

When he lost to Vitor Belfort, I was devastated. I was standing up right in front of the TV, I was psyched and stoked—I really felt like he was going to beat Vitor. And to have it happen and be over that quick, I felt bad for him, and I also felt bad that I wasn’t there for him, you know? It was hard to watch. The night went downhill from there pretty much. I don’t think I said a word the rest of the night.

I know where he’s at, dude. I’ve had some great years—you’re around yes-men, they see you and they wanna party with you; they wanna have fun and be able to take a story back to their friends. I just want to see him, on top of being a great fighter, do the right things in life. I’m definitely the person to call him out on certain things. Whether we have a big fight over it and he doesn’t talk to me for a week or two, we always squash it. Deep down, I think he’s the same, humble surfer from Santa Cruz that’s one of the boys. But his brother has to dig through a couple layers and snap him back to reality once in a while.

As far as recreational surfers go, Luke’s one of the best ones. I mean, I’ll smoke him, but that’s the only upper hand I’ve got! I’ve got to take advantage of it.