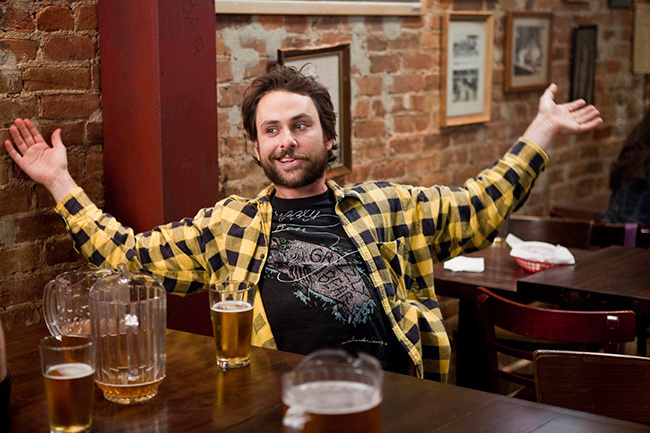 Day is the rumpled, high-voiced star of the nihilistic sitcom It’s Always Sunny in Philadelphia. With his unkempt hair, Brooklyn beard, loose-fitting casualwear, excitable temperament, scattergun sense of humor, and slightly doughy body, Day is a sort of anti-GSP. The welterweight champion seems incapable of wearing clothes that don’t fit, retaining body fat, understanding what it means to be rumpled, or telling a joke. But that hasn’t stopped Disney-Pixar from tapping him to be the voice of Day’s character, Art, in the Quebec French-language version of the upcoming animated Monsters Inc. sequel, Monsters University.

I can’t imagine what some casting director saw in GSP that made him think of Day. The comedian has made built his career on high-pitched exuberance and unrestrained buffoonery; he’s a scenery-chewer through and through. GSP, meanwhile, is a living advertisement for the virtue of self-containment, a man who seems at war with his desires, his weaknesses, and anything resembling self-indulgence or dissolution. I don’t know anything about casting a movie, but I can only guess that the producer of the French-Canadian version of Monsters University saw the original English version, decided casting Day was the worst mistake anyone could have made, set out to correct it by hiring his opposite, and came up with St-Pierre.

Whatever the reasons, the appearance of Georges St-Pierre in an animated children’s movie shows how much more comfortable Canadians are with MMA than we are. When I went to UFC 158 in Montreal back in March, one of the first things I saw at the airport was GSP’s face on the front cover of a newspaper. Not long after that I came across a store in the center of the city’s fashionable shopping district that specialized in MMA gear. The store was called L’Octagone, and a large poster of St-Pierre hung in the display window. I tried to imagine a time in the future when UFC stars would feature prominently on the cover of an American newspaper or an MMA gear store would appear in SoHo. It seemed a thousand light years off. We’re still wasting our time with arguments about the morality of MMA, and the sport isn’t even allowed in SoHo. Meanwhile, GSP is a celebrity in Canada and a hero in his native Montreal. I’d be willing to bet 75% of New Yorkers don’t know who Jon Jones is.

It’s a good indication of how much we accept mixed martial arts as a culture to guage just how far we’re willing to allow mixed martial artists insinuate themselves into our culture. In Hollywood, they let gangster rappers play travelling nannies and professional wrestlers play the Tooth Fairy, but the limits of casting directors’ imaginations when it comes to fighters extends about as far as ex-military mercenaries and ex-military mercenaries.

Whether Georges St-Pierre is capable of portraying a “a mysterious monster with a questionable background and the strangest member of the Oozma Kappa fraternity at MU (Monsters University)” remains to be seen. That Canadian filmmakers and the Canadian public are willing to let him try tells us everything about their level of comfort with human beings battering each other in cages, and about our own lingering squeamishness. 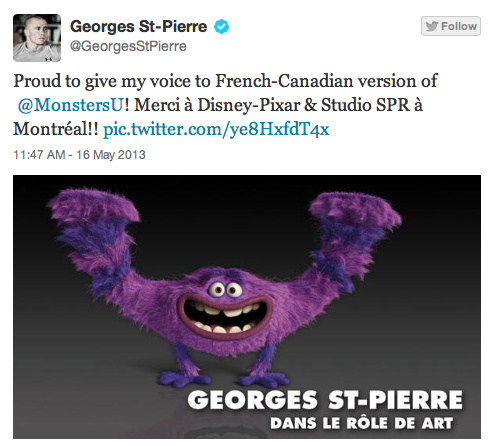