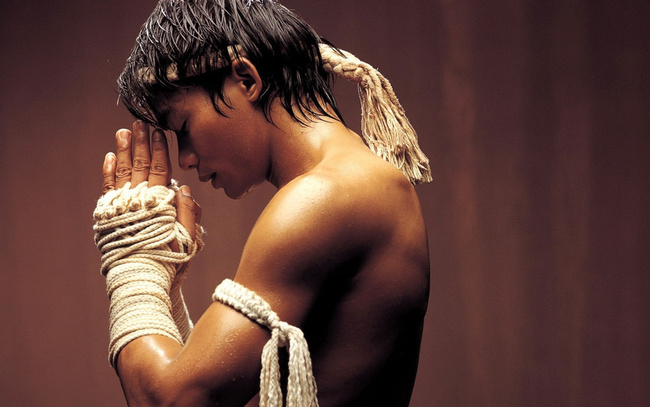 Last month I wrote about Tony Jaa and some of the classical Muay Boran on show in the martial arts masterpiece, Ong Bak. The film's plot wasn't worth the paper it was printed on, but we forgave that because of the unparalleled quality of the action.

Jaa returned to the big screen in Tom-Yum-Goong, released in English speaking countries as The Warrior King and The Protector. The film was even dumber than Ong Bak. The plot is a slog to get through—it’s just so hard to care about Jaa's character's kidnapped elephants—but it's filled to the brim with action.

One of the most famous scenes in the movie is when Jaa's character is stabbed and goes into a bone-breaking tantrum against wave after wave of sharply dressed attackers. In keeping with my short tradition, let's take a look at some of the classical martial arts techniques on show.

To begin with, Jaa demonstrates the old timey technique of attempting to hyperextend the opponent's arm across one's own chest. Called numerous names, including “bird spreads its wings” and “going to fight with one knife”, it can be found in the Bubishi, a chuan fa manual passed from master to student in Okinawa, the birthplace of karate.

The purpose is not so much to break the arm—as the attacker's wrist can turn to alleviate pressure, just as the stuntman's does here to give the appearance of a fast break—but to combine the arm bar and the foot sweep. In the classical technique, Jaa's near foot would remain behind the opponent's, ready to punt his leg out and “spread the wings” to knock him over backwards.

As it appears in the Bubishi. The arm is not the focal point, it is a double attack on the arm and the near leg.

Returning to the world of Muay Boran, Jaa demonstrates a commonplace Muay Boran teaching in his kicking counters throughout this scene.

Pivoting on the standing leg when throwing a round kick is an important point, if you don't, over hundreds or thousands of reps you really start to torque your knee badly. You can do tremendous damage to your own pivot leg over time, just by kicking poorly. Imagine what someone else could do to it.

Here Jaa demonstrates an application of the Thaye Kham Sao. A side kick against the standing leg after a check. This is another Muay Boran application—the so called dark side of Muay Thai. Where Muay Thai is a sport of rules and respect, Muay Boran is the nastier, non-sporting ancestor. It's more primitive, but it's got some nasty ideas which are well worth picking up.

Imagine the freak out the internet would have if Jon Jones did this to an opponent's standing leg.

The second technique in the sequence demonstrates an application of the idea above, but by kneeling onto the attacker's foot, Jaa shoes another technique. In old school karate and kung fu the act of foot trapping (you know how often I talk about hand trapping) was quite common. Archie Moore used to say that any time you can hit someone while you're standing on their foot, you've got a good chance of knocking them down. Prince Naseem did it, James Toney did it, Floyd Mayweather Sr. did it. It's a nice old school trick. In fact, a few wrestlers (including the Schultz boys) have opted to step on the opponent's standing foot when attacking with a single.

But if you keep the foot pinned, well, no-one's ankle joint opens to 180 degrees. The Goju-ryu form (of Chinese origin) Seisan contains a weird little sequence of foot flicks and hand turns.

One interpretation of this is that you are jumping forward, planting your lead foot on top of the opponent's, and using both hands to push him back as hard as you can, while you pin his foot. If he falls, and you keep the foot trapped, there's a great chance of injury.

There's plenty of other craziness on display in this scene. The classical key lock / ude-garami (arm entanglement) / americana made its way in to the scene, albeit with the hands the wrong way round.

And this hilarious Irish whip onto the knee, into that most powerful of strikes—the scorpion kick!

The final neat technique from this scene is the arm destruction Jaa performs with his knee. Placing the knee on the extended arm and kicking down as if to start an engine. Bas Rutten shows a technique just like this in his hilarious, and informative, street self defense video.

I have always loved limb destructions. They're cool to know, even if you're not going to pull them off on trained opponents or against sparring partners you actually like. Whether it's as simple as parrying the jab into the point of your left elbow, or as complex as the waki-gatame winding armlock. One of the best ones I was ever taught was similar to the above technique, but started off of a basic kick catch.

So there you it—a handful of limb destructions, when we started out talking about a silly fight scene from a film about elephants. Go try them out gently on compliant friends / pets, and then never, ever use them again.