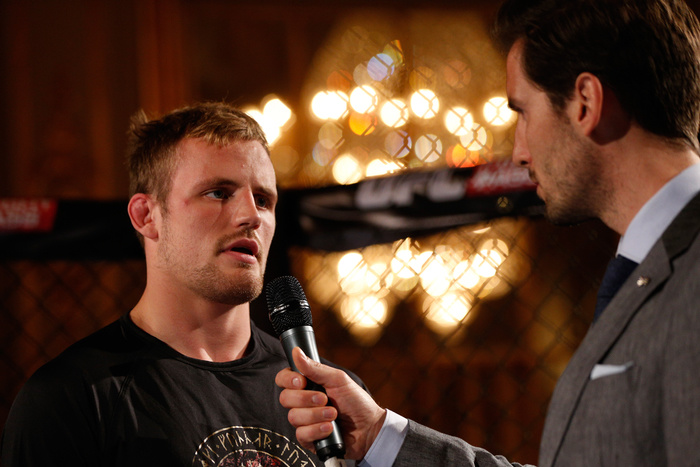 Five years from now, or 10 years or 15 years or whenever MMA finally decides to enter the Age of Reason it’s been building toward since 2001, when the patchwork mania that was early no-holds barred fighting finally got unified rules, we’ll all be able to look back at the days when professional fighters cut 20 pounds of water weight in the week leading up to a fight and laugh. The same way basketball fans laugh at referees retrieving balls out of peach baskets and hockey fans laugh at players skating onto the ice without headgear. Soon weight-cutting will go the way of groin strikes and hair pulling and heat-butts (other relics from the dark early days), and our beloved sport will at last be called “civilized”—anyway, as civilized as mixed martial arts can be.

During the so-called Heroic Age of Medicine, from the late 1700s through the mid-1800s, before diagnosis and observation had become the norm, doctors believed that the body was a machine and that all diseases were the result of an overstimulation of blood and nerves leading to an imbalance in the four humors (blood, phlegm, yellow bile, and black bile), an imbalance best treated by rigorous and extremely dangerous means, in order to jolt the body violently out of its maladies. Techniques at the time included bloodletting, intestinal purging, blistering, vomiting, profuse sweating, even skull-drilling. All to restore the body back to its “natural balance.” The philosopher Immanuel Kant described these methods as “heroic” because they were simultaneously the quickest way to end a medical conflict and the way most likely to endanger a patient’s life.

While we wait for the Rational Age of MMA we’ll have to make do with the occasional voice of reason crying out in the wilderness. Voices like that of UFC welterweight contender Gunnar Nelson, who told Submission Radio yesterday that the state of MMA weight-cutting, where professional athletes routinely and proudly deplete their bodies of vital nutrients before stepping into cages to face off with someone who is attempting to cause them great physical harm, is “stupid” and “ridiculous,” a statement so rational that only in the world of professional sports, or professional politics, could it possibly be seen as something other.

"People don’t have to go through all this cutting,” Nelson said. “It’s not good for your health; it’s not good for your brain. It’s just it’s not good. And I don’t see why we should be doing this. I think we should get rid of it, and I think we should get rid of it quickly. … And [fighters are] actually fighting guys their weight, because everybody cuts so much weight, except me maybe and a few other. But I think they should change it so that people can just fight closer to the weight, so that people don’t have to be cutting all this weight to have to fight people their size."

Just think of it: fighters fighting at their natural weights, fighters not draining all the water out of themselves before fighting, fighters forgoing the painful and dangerous (but universally accepted) act of body-depletion in the name of not only reason but improved athletic performance. Can you imagine?

George Washington was a robust man of 67 when he died. Two days earlier he’d woken up with a bad cold, and when various folk remedies (molasses, vinegar, and butter, among others) didn’t make him feel better he demanded to be bled. The heroic father of his country died that night, after three different doctors had drawn five pints of his blood—more than half the blood in his body—over 12 hours.

What madness weight-cutting is! What stubborn MMA madness! Mixed martial artists are the paragons of health and the embodiments of the value of countless cutting-edge fitness theories and techniques—evidence on earth of just how far the human body can go … right up until that last crucial moment. Then, right before the fight, right when logic is most needed, reason and science and self-preservation all suddenly and inexplicably go out the window, and fighters look instead for the medicinal delusions of flagellation and the comforts of mad tradition to give then an extra edge. How like the adrenaline junkies of the Octagon to seek out medical approaches that promise greatness even as they bring patients closer to death. How heroic.

Doctors in the Heroic Age were great believers in the value of counter-irritation, treating a patient in pain by causing pain. Doctors would cut gashes in healthy tissue and then fill them with foreign objects, often dried peas or beans, in order to produce an infection and distract patients from their original malady. Patient’s wounds were then reopened daily to prevent them from healing.

It’s madness to devote so many countless hours carving away at and perfecting your body, creating something capable of feats far beyond the comprehension of other humans, only to ruin it at the worst possible moment by depleting it of everything it needs to thrive. Endless hours in the gym, countless flavorless meals digested, hundreds of subtle techniques mastered, thousands of miles run, millions of pounds lifted, each brick laid down carefully and cautiously, one at a time, strategically, building up and up and up to that moment of perfection, just to get to—what? Voluntary starvation, active depletion, strategic self-harm? And for nothing! To suck 30 needed pounds out of your body in the hopes of gaining some illusory advantage over an opponent who’s done the exact same thing! That’s pure insanity. What in the world is going on with MMA?

Dr. Benjamin Rush, a signer of the Declaration of Independence and one of the most infamous proponents of heroic medicine, would burn patients’ backs with acid and cut them with knives. He would keep their wounds open for months at a time in order to facilitate “permanent discharge from the neighborhood of the brain.“ A strong proponent of medicinal bloodletting, Rush “shed more blood than any general in history.” He also used starvation as a treatment method.

What do mixed martial artists hope to gain with all their weight-cutting, what is the point? And how could one argue with Gunnar Nelson that the sport’s weight-cutting culture isn’t sheer lunacy, blind devotion to ridiculous tradition, a holdover from a darker time, when machismo and forbearance and suffering were ends to themselves, virtues simply by virtue of being painful? The whole thing smacks of the Middle Ages, of mass hysteria and mass hypnosis and mass delusion. Give us hairshirts, give us self-flagellation, give us the belief that pain is purifying and moral and proof of religious fervor! We are heroes, and suffering is noble.