Hanging On Khabib Nurmagomedov's Every Word 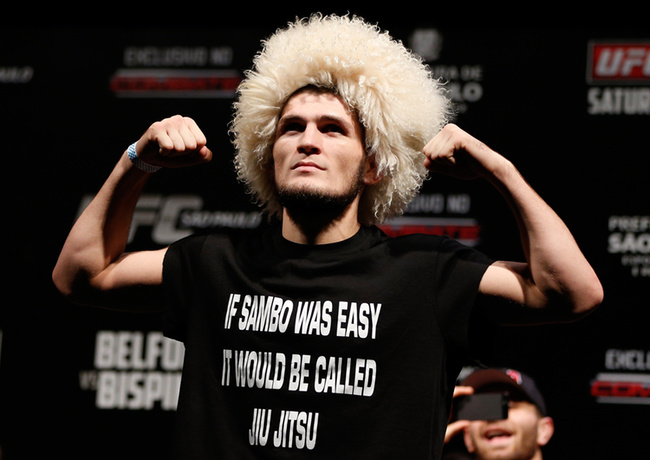 Today marks 11 months since the last time Khabib Nurmagomedov took off his papakha and spent three rounds suffocating future lightweight champion Rafael dos Anjos. But somehow, even after being hobbled by a torn meniscus and with more than two months to go before returning against Donald Cerrone at UFC 187, the Dagestani grappler's polysyllabic name is rolling off our lips like he never left.

That's because he keeps jawing at opponents both real and potential, and dropping jewels like this one directed at the just-dethroned Anthony Pettis:

If you want to be a champion don't go to parties , go to the gym guys ;)

And besides sniping at Cerrone on social media, Nurmagomedov criticized him during a memorable appearance on The MMA Hour earlier this week:

"Cowboy is fake. I don't think so he's really cowboy, I think he's fake. He all the time drink, drunk. I don't think so he's really cowboy. I'm really cowboy. I'm mountain guy. I'm training camp all my life, I'm wrestling with the bears. I'm really cowboy. He's drunk guy…I am Dagestan cowboy, 100-percent…You know why he’s a little bit nervous? Because I say truth. I say truth. I no say trash talk, I say truth, and he’s a little bit nervous. He needs wrestling, he needs wrestling partners. But it’s okay. After two months we have fight, we have crazy fight, and when cage close, he understand, ‘Wow, this guy’s crazy. Why I take this fight? Why I take this fight?’ Because I want to smash this guy. He say I won’t smash this guy? [He say,] ‘I kick his ass.’ Okay. 23rd, May. 23rd, May.”

This is a kind of broken-English braggadocio we don't usually hear in the cliché-worn fight game, and it strikes a nerve that even the most carefully crafted punch lines miss. To be clear, I'm not gawking at Nurmagomedov. He speaks English with greater fluency and confidence than any second language I've ever attempted, and it's commendable that he's striving to be a fighter for whom the thrill of victory isn't filtered through an interpreter. But that's not the point. The point is that Nurmagomedov reminds us that the best trash talk—the kind that we buy into—prizes honesty and character above verbal gymnastics.

When your next fight is often only as important as an audience thinks it is, stirring the pot is a time-honored way to drum up interest, whether it's a zing from Chael Sonnen or Conor McGregor, or the stream-of-consciousness hostility from Nick Diaz. But trash talk is comprised of more than words strung together: it needs conviction from the person delivering them. When Phil Davis abandoned his nice-guy persona to spit invective at Jon Jones—ostensibly to prove that he had the mouth to hype a future fight against the champion—the words fell flat. "The last time you tried to handle somebody in the striking department," Davis said to Jones, "Alex [Gustafsson] hit you so many times in the right eye you almost turned into a pirate." It sounded like a battle rapper mumbling and reading the lamest verse off a piece of paper. More importantly, Davis lost the battle he actually needed to win—the one against Anthony Johnson.

Meanwhile, after beginning his professional career 22 fights ago, Nurmagomedov hasn't experienced anything other than victory. While precious few fighters (especially lightweights) can keep that aura of invincibility forever, for now, Nurmagomedov has the résumé to back up everything he says. And the kind of verbal abuse he's been doling out lately has no gimmicks or contrivances: instead, its signature, practical style is stripped of ornamentation. "I'm wrestling with the bears, I'm really cowboy, he's drunk guy," doesn’t waste a syllable.

And it's not like the meaning of Nurmagomedov's English is ever in doubt: he considers himself the heir apparent to the title, with another lightweight on a win streak in his way. Cerrone certainly understands him, telling an audience in Dallas last week, "[Nurmagomedov's] really getting under my skin. He's doing a good job talking shit on Twitter and trying to get under me, and it's working. So I'm stocking that up and I'm going to come fucking unglued."

All those fighting words are going to make for a fun few weeks leading up to May 23.