Harry Reid Returns to His Boxing Roots to Attack Trump 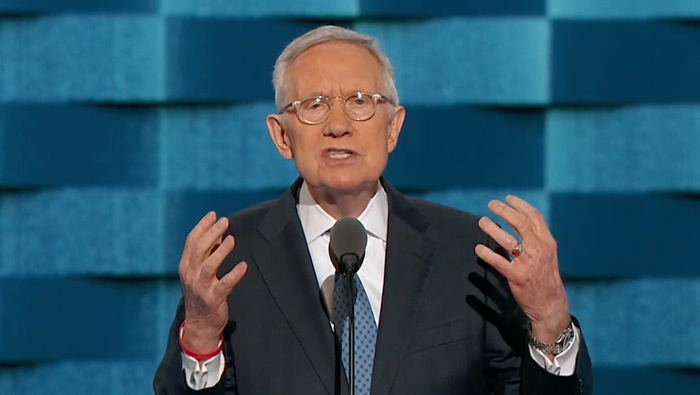 Last night at the Democratic National Convention in Philadelphia a murderer’s row of party leaders, from Vice President Joe Biden to vice presidential hopeful Tim Kaine to President-in-Winter Barack Obama, tore into Republican candidate Donald Trump as being temperamentally, philosophically, and emotionally unfit for the presidency. It was a bruising night for Trump, with Biden claiming the real estate mogul/reality TV personality lacks compassion and empathy, Kaine mocking his speech patterns and mendacity, and the president slamming him for being a fear-mongering demagogue with no faith in the American people.

For all the raised voices and passion, though, it was former Senate Majority Leader Harry Reid who brought the fighting words, conjuring an extended metaphor about boxing to make the case that Hillary Clinton is the only person in the presidential race, and the Democrats the only major political party in the country, looking out for the middle class. Biden may have declared that Trump is “full of malarkey” but Reid was the one who went old school.

“Since my boxing days I’ve fought my share of fights … I’ve realized that a leader is actually a cornerman, someone who stands on your side, who has your back in a fight,” Reid said after putting the blame for Trump’s rise squarely on the Republican party. ”Middle-class families fighting to give your kids a better life—Democrats stand in your corner. New Americans risking everything to get here, and then fighting to make it here—we’re in you’re corner.”

Of course on the occasion of Obama’s last major address as president, the perpetually soft-spoken and oratorically underwhelming Reid was never going to be the one people remembered, but it was nice to see the old scrapper, now 75 years old and preparing for retirement in January after 30 bruising years in the Senate (“stepping out of the ring one last time,” as he put it), go back to the well of his early boxing days to lash out at his rivals.

Reid came by fighting honestly. Born in 1939 in the hardscrabble mining town of Searchlight, Nevada, he was raised by a drunk and abusive father in a house that had no toilet or hot water. According to a 2010 New Yorker profile, Reid was an angry kid who got into fistfights with everyone, including his father (who was beating up Reid’s mother at the time) and his future father-in-law (who didn’t approve of his daughter’s choice in husband) and kids from other towns who moved to Searchlight, one of whom he beat so badly he flattened one his own knuckles permanently. “The first thing I did was pick a fight with him,” Reid said. “He was new, and I was jealous of him. He probably dressed decently, was probably well spoken.” It was a high school teacher of Reid’s, Mike O’Callaghan (who would later become governor of Nevada), who saw potential in the angry young man and convinced him to take up boxing. 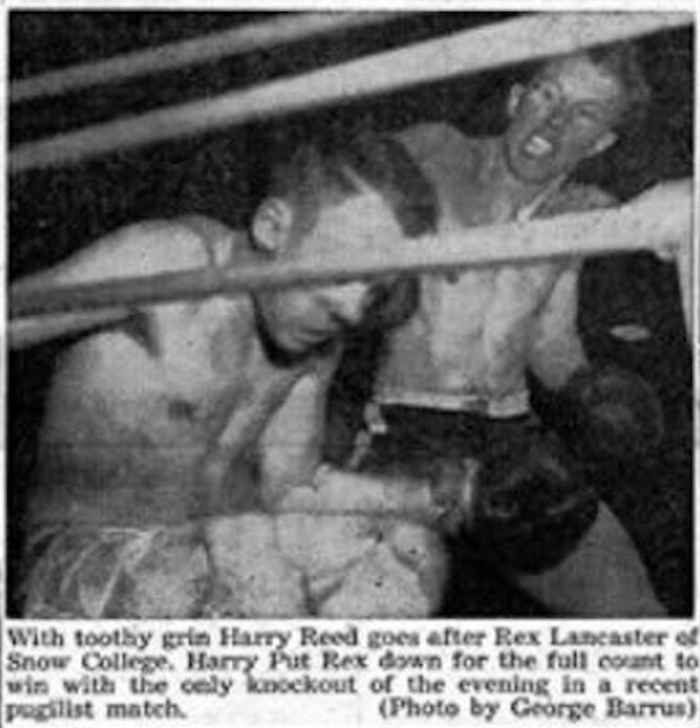 Reid’s amateur boxing career lasted about two years and 20 fights, and while there’s apparently no record of his wins and losses, a great newspaper photo of a “toothy” Reid knocking out Rex Lancaster of Snow College “in a recent pugilist match” survived.

Reid’s attachment to fighting never waned after that. Since arriving in the Senate in 1987 he has been a consistent champion of prizefighting, even (rare for a old-school boxing guy) jumping on the MMA bandwagon early by supporting the creation of unified rules and pushing for national legalization. UFC executives and fighters repaid Reid’s support in 2010 by endorsing him during his close 2010 re-election campaign against Sharron Angle, who was riding the Tea Party tsunami at the time. In the end, while it was likely Angle’s lunacy that lost her the race, the endorsements of UFC President Dana White and fighters Frank Mir and Randy Couture helped Reid keep his seat for a fifth term.

In 2014 Reid, who would admit a year later in an interview on CNN that he wasn’t sure if all the blows he took to the head as a young boxer “did me much good,” joined his Republican Senate colleague (and fellow former amateur boxer) John McCain at the Capitol Building in Washington D.C. to throw his support behind an ongoing study at the Cleveland Clinic “dedicated to understanding the effects of repeated head trauma in fighters.” At the time 400 boxers and mixed martial artists were participating in the study, which looked for early warning signs of head trauma and aimed to predict reactions to different head injuries. Last month Reid and McCain teamed up again, this time to write a letter calling on Obama to issue a posthumous pardon for Jack Johnson, the first African-American heavyweight boxing champion of the world, whose career was destroyed in 1913 when he was charged with violating the Mann Act by transporting a white woman (his girlfriend) across state lines. No one doubted even then that Johnson’s arrest and conviction were motivated entirely by racial animus, and 100 years later, as Reid said, “his legacy continues to be marred by that miscarriage of justice. … He was a true champion, a fighter and a barrier-breaking pioneer whose reputation was tarnished by the racism of that time, which led to his unjust imprisonment.”

So, after a lifetime as a fighter and defender of fighters, it was appropriate and perfect that Harry Reid, now 75 and speaking at his last Democratic Convention as a man “in the arena,” and facing the dire possibility of a president who would blithely dismantle everything the senator had spent his life working for, would return to his fighting roots and dust off his best boxing metaphors for one last squabble.