Heroes and Villains in Texas 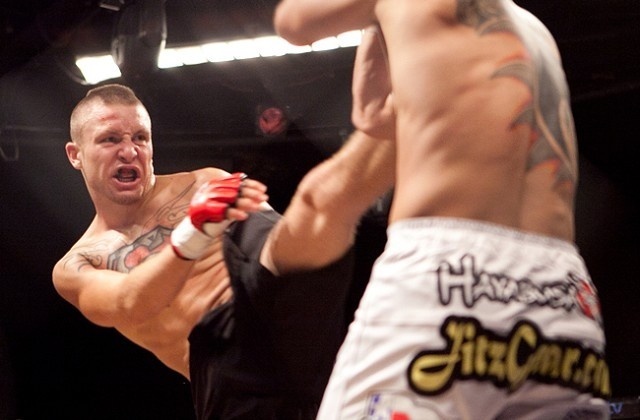 Will Campuzano’s flyweight title fight with Jimmy Flick may have been the headliner of Legacy Fighting Championship 16 in Allen, Texas, but Matt "Crowbar" Hobar’s attempt at revenge against Steven “Ocho” Peterson was the show's heart.

Over the last few years, Houston-based Legacy Fighting Championship has grown from a modest regional promotion into one of the biggest unofficial feeder leagues for the UFC. There's a sense now (like there wasn't before) that Legacy fighters could possibly move on to bigger things. So the crowd that night in Allen was passionate, fueled by video replaying the lowlights of Peterson and Hobar's August 13 fight in Dallas, in which Peterson mocked Hobar with a crybaby face after Hobar dislocated his own elbow with an awkward punch and lost the fight by TKO. That bout, Hobar’s sixth since going pro, represented the first loss of the 25-year-old Dallas fighter’s career.

Peterson is younger, only 22, but entered the fight with a few more fights under his belt than Hobar and a respecable 8-2 record. He is not unfamiliar with the villain role, which, he has said in numerous interviews, he now fully embraces. Peterson knows bad guys may not be loved, but you can’t deny their marketability. Still, he maintained that his taunts were aimed at Hobar’s displeased fans, not Hobar himself. But at this point it didn’t matter who he was making fun of. The play was written, and Peterson was cast as the heel.

To the sounds of Eminem’s “Lose Yourself” (a fighters favorite), Peterson strutted to the cage with his face obscured behind a Spider-Man hood. He removed the headgear and stripped to his trunks, revealing an enormous Superman logo tattooed across his chest, wreathed with curling lips of fire. The mixed comic-book superhero iconography did little to endear him to the crowd, whose boos grew louder as he circled the cage. Hobar, meanwhile, looked grim-faced and determined. He couldn’t have missed the thunderous cheers when his name was announced but he didn't acknowledge them either.

Peterson opened the fight with a kick to Hobar’s face. Hobar responded with a solid punch, and the two exchanged blows as shouts of “Sit down, Ocho!” peppered the din of boos. Hobar landed more strikes than Peterson, including a solid kick to the ribs; he punched him, picked him up, and threw him onto the canvas. Peterson whiffed with a few wild swings, including a spinning backfist; it would have been a beautiful move if it had connected.

In the second round, they grappled, Peterson mostly from his back. The crowd roared every time it looked like Hobar was about to finish him off, but Peterson managed to slip free every time a loss seemed imminent. A couple of times he lay there on his back lashing up with his feet, looking very much like a little brother trying desperately not to lose a fight to an older sibling. The crowd didn't approve and rained down boos and more “Ho-BAR!” chants. Peterson twice tried a sort of leaping punch that looked flashy but was off-target both times. As both fighters tired and slowed down, Hobar twice caught Peterson’s kicks, twisting his ankle but then losing his grip. By round three the two men were so gassed that those few strikes that didn’t fall short had little weight behind them.

At the horn, each fighter celebrated as if he had no doubt he was the winner. Hobar climbed and straddled the cage, arms raised, at last acknowledging the overwhelmingly supportive crowd, while Peterson paraded around the ring confidently. By the time the final decision was announced, the audience was already celebrating. Of course Hobar had won; how could it have gone any other way? The crowd’s wounded protagonist had gotten his revenge and beaten the heel -- a villain who'd inked a hero’s logo into his flesh.