Hey Pussy, Are You Still There: Jon Jones and the Cats of Instagram 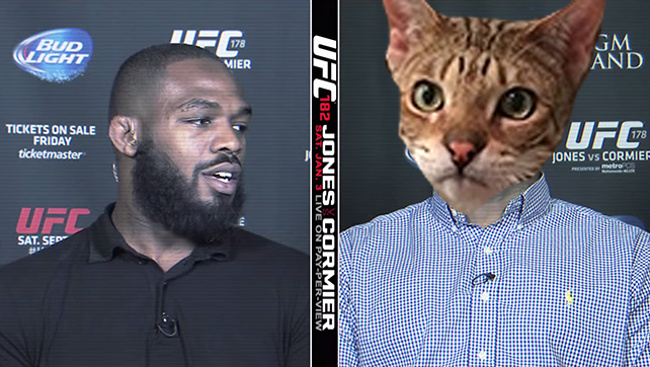 He’s one of the best pound for pound fighters in the history of MMA. He’s one of the biggest current stars in the UFC. He’s excellent at promoting his matches. And he’s fairly skilled at press conference set deconstruction. He also demonstrates a significant amount of skill in the highly competitive arena of celebrating cats on the internet.

Now, Jones has yet to reach the level of a Grumpy Cat or Lil Bub owner, but he just might be on his way. Jones and his family are now the proud owners of four cats: two domestic house cats named Chai and Charcoal, and two Savannahs (pricey and rare hybrids of Servals and domestic cats that sell for up to $25,000 each) named Mufasa and Ali and all of them have received significant camera time on his Instagram account. In the past year alone, Jones has made 75 separate posts about his cats.

In honor of his mad cat-documenting skills and his forthcoming fight at UFC 182, we ranked all 75 of those posts. Here are the top 25, followed by links to the other 50:

25. Mufasa and his reflection

Yes Mufasa you're a gorgeous cat

Yes I'm going to be that guy who walks around pet friendly places with my gigantic cat on a leash. Training Ali early

Jones promises to become “that guy who walks around pet friendly places with my gigantic cat on a leash.” We look forward to that.

22. Ali checks into the MGM Grand

Ali checking into the #MGM

Ali is quickly becoming the Olivia Benson to Jon Jones’s Taylor Swift. And we mean that in the best possible way.

21. “Liv trying to say good morning to baby Ali, him wanting nothing to do with her.”

Liv trying to say good morning to baby Ali, him wanting nothing to do with her

Everyone who has ever loved a cat has suffered through this tragic moment of unrequited attention. Multiple times.

Chai is not impressed. Mufasa is shocked by this development. Cats.

He’s pretty chill, given the circumstances.

It’s such a dad move to film your cat at the vet.

Grateful for my serval #savannahcat mix!! Even though he barely likes me and thinks he's the man of the house #Thanksgiving

Jones is thankful for his cat, even though his cat is a dick. This is how all cat lovers feel about their pets.

15. Jones has a bad practice

Just getting home from morning practice and let's just say, I've had better mornings in the room. It would be a rookie mistake for me to allow that to get to me though. Getting ready to take a hot shower and forget about it. I'm going to enjoy my family, hydrate and get ready for the next session. Can't always be on your A game...it's only practice. #wetalkingaboutpractice #venting

He vents about it and rubs a cat belly.

13. Charcoal drinks Santa’s milk. Jones worries that the other cats are a bad influence on Ali.

Man these cats around here are doing whatever they want to do. I refuse to let their bad habits rub off on my boy Ali tho. Been keeping him locked in my bedroom, training him up before unleashing him to the rest of the house. I'm going to make sure he bonds with me and my fiancé before bonding with the other cats. Don't want him to end up gang banging like his three older brothers haha

12. Mufasa vs The Blinds

That’s how this happens.

Mufasa is kind of a dick. Again.

Charcoal giving me a little rubdown

Charcoal is the unsung hero of the Jones family. Mufasa and Ali get all of the attention (and Chai seems content to live his life out of the spotlight) but who’s there when Jon is feeling sore and needs a massage? Charcoal.

8. Charcoal, a blanket, and Jon

And who’s there when, um, a fuzzy blanket needs licking? Charcoal.

7. Ali and Jones settle into the MGM Grand

6. Jones waxes philosophical about his cats.

So I'm definitely going to name him Ali. I just love saying it, Ali being one of my biggest inspirations and all. Excited about my future with this #serval, I'm going to make him everything I wanted in Mufasa and more. I've learned to appreciate Mufasa just the way he is, a freaking boss.

And learns an important lesson about loving people/cats for who they are, not who you want them to be: “I’ve learned to appreciate Mufasa just the way he is, a freaking boss.”

Fortunately, this moment did not occur in the MGM Grand lobby.

In April, Mufasa managed to escape from his Albuquerque home and disappeared, devastating Jones. The champ immediately offered a $1500 reward to anyone who had any information about his exotic pet, because he was afraid that Mufasa was hungry.

Regardless of anyone’s personal opinions on owning semi-domesticated wild cats – or how many pets one person should own – this was awful. For an animal lover, there are few things worse than fearing for a lost pet who can’t completely defend and feed themselves in the outside world. And missing Serval stories don’t always go so well. Earlier this month, a runaway Vancouver Island Serval went from an internet folk hero to road kill in a matter of days.

So it was a truly great moment in Cats of Instagram history when Mufasa happily returned to his family and got some much needed rest.

The very end of a wild two hour chase. Big thank you to everyone who helped, that was definitely a team effort. So grateful to have Mufasa back

And the moment when he was actually found, after a two hour chase, was a pretty great contribution to the internet cat cannon, too.

@jonnybones #GotEm thanks @cabq for all your help!

2. Charcoal gets his turn in the public eye.

My boy charcoal & I modeling for #ShowYourSoftSide earlier this camp

The criminally underrated finally got some attention of his own in March when he posed with Jones for the Show Your Soft Side campaign against animal abuse.

I'm having a hard time sleeping so I thought I'd harass Mufasa a little bit. I don't think he's very amused. He totally punked me at the beginning of this clip, I actually flinched

With all due respect to my Fightland colleague, the brilliant Jack Slack, I would like to propose an alternate method for defeating Jones: be a tired and angry cat.