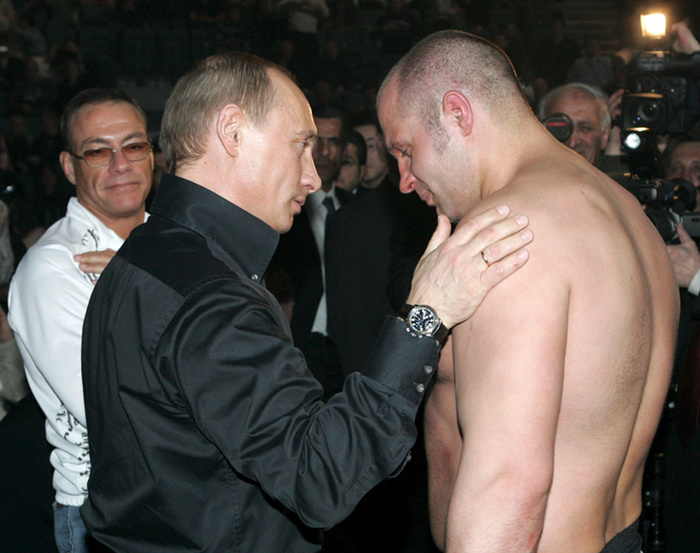 As the 2016 presidential campaign lurches and gasps toward its desperate end, Hillary Clinton’s team, looking to twist in the knife, has released a six-minute video titled “Russia First” detailing Donald Trump’s questionable ties to the Russian Federation and its fearless leader, Vladimir Putin. Those ties run the gamut from the political, chronicling Russia’s role in the recent hacks of the email accounts of the Democratic National Committee and Clinton campaign staffers, and Trump’s support of their efforts; to the financial, including the real estate mogul’s attempts to sell Trump Vodka in Russia; and the ideological, pointing out that Trump and other Putin-approved political movements share similar nationalistic, xenophobic philosophies.

All but lost amid the mountain of damning evidence, however, is a brief mention of Trump’s relationship with the man the Clinton campaign calls “Putin’s favorite mixed martial arts fighter”—that man, of course, being Fedor Emelianenko, the Russian MMA legend who, no matter the scope of his dreams and desires growing up in Stary Oskol, surely never imagined he would one day play a role in an American presidential election. A deeply religious man, Emelianenko must wonder at the majesty and mystery, and terror, of it all.

The more important question: how much is Russia invested in Trump? pic.twitter.com/NEy0yG2tWk

The relationship between Trump and Emelianenko referred to in the video developed during the ill-starred run of Affliction Entertainment, an upstart MMA league that for a brief moment in the late aughts made a play to unseat the UFC as the biggest promotion in the world. To do that Affliction paid unprecedented money to some of the most recognizable names in the sport, including Vitor Belfort, Andrei Arlovski, and Tim Sylvia. But the undisputed star of the show was Emelianenko, the undefeated and seemingly invincible heavyweight champion of the legendary PRIDE organization. The promotion’s undisputed out-of-cage star, however, was Donald Trump, who owned a significant equity stake in Affliction and who used his gift for promotion (self and otherwise) to sell their first two events. That those events ending up costing the promotion millions and were never followed by event number three didn’t matter to Trump then and clearly doesn’t matter to Clinton now. For Trump, hype has always been more important than the bottom line, and for Clinton anything that ties her opponent to the autocratic ruler of one of America’s most contentious adversaries is an electoral boon. And no tie binds a man to the heart of Vladimir Putin like Emelianenko.

Political tactics aside, by including Fedor Emelianenko in their list of suspect Russian Trump ties, the Clinton campaign is also further muddying the water of an increasingly confusing geopolitical and sporting landscape. These are strange days for Russian/American relations: days of fraying allegiances. Things used to be clearer and more firmly established. It used to be that you could count on the Russian MMA world to worship at the feet of Fedor Emelianenko, for example, but after the fighter came out against children’s fights put on by Chechen dictator Ramzan Kadyrov (Putin’s handpicked man) two weeks ago, many fighters in Chechnya and Russia have turned their considerable backs on their former hero. And it used to be that you could count on Fedor and Putin always backing each other’s plays, but despite squeaks from Putin bureaucrats, the president himself has remained conspicuously silent about both Kadyrov’s kid fights and the lashing Emelianenko took for protesting them. Or who knows? Maybe Putin is going to turn against the Chechen leader as punishment. Nothing is keeping its promise right now.

Time was foreign governments didn’t meddle in American presidential elections. And time was candidates in those elections didn’t encourage foreign governments to do so. And time was election-year partisanship stopped at the water’s edge of geopolitical dispute. And time was American presidential hopefuls didn’t applaud foreign dictators. And time was you could rely on Republicans to dislike the Russians. But in Trump’s Republican party voters don’t just tolerate Russian oligarchies, they applaud them. In a recent poll, 49 percent of Trump supporters said they saw Russia as an ally or friendly nation, this despite recent claims from national security leaders that relations between the U.S and Russia are as bad as they’ve been in 40 years. Everything is upside-down.

And take me and Hillary Clinton. I used to support her candidacy unreservedly. I donated money and invested an unreasonable amount of goodwill and psychic energy. I wept with joy after the first debate and with pain after her “basket of deplorables” gaffe. I delighted at every new poll and I held my breath with every new Wikileaks dump. I have been with her all the way. But that all may change now that she and her campaign have turned their attack machine on poor Fedor Emelianenko, the first mixed martial artist I ever loved, arguably the greatest fighter of all time, a man who brought simple grace and decency to a brutal sport even as he dominated it: a man who, like Alicia Machado and Billy Bush and Joe the Plumber before him, has been dragged into the great steaming cauldron of American electoral politics, a cauldron from which even the sweetest souls among us do not escape unscathed. If Fedor grows cynical after this week I may never forgive President Clinton. I may have finally discovered something that can disqualify a human being from the American presidency in 2016.

Harry Reid Returns to His Boxing Roots to Attack Trump