Holohan versus Smolka: A Storm of Submissions 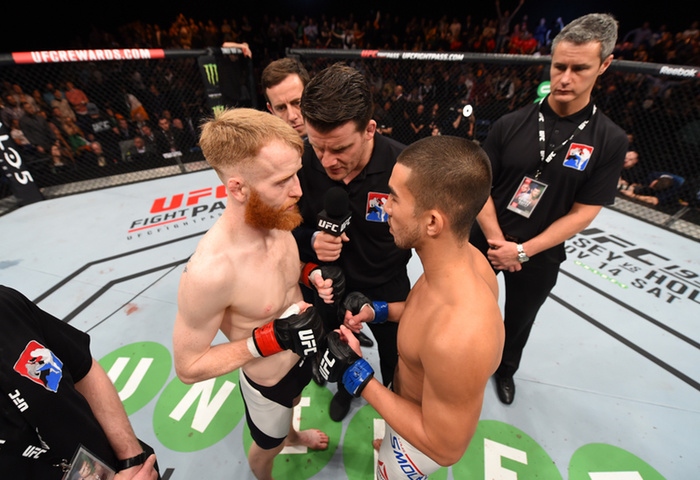 UFC Dublin was expected to be terrible after the loss of the only two 'name' fights on the card, but those who watched it weren't all that disappointed with the fights which did take place.

The standard answer for “best grappling match in MMA” is Kazushi Sakuraba versus Carlos Newton. The clash of styles between the catch wrestler and the judo / jiu jitsu ronin led to a whirling dervish of submission attempts. Yet there have been a good number of grappling based tear ups in MMA in the decade since, many of which reflect the incredible distance grappling has come over the years.  Charles Oliveira and Hatsu Hioki's bout last year was a great contender for the title. And last night Patrick Holohan and Louis Smolka only went a round and a half, but it was some of the best back and forth grappling you'll be lucky enough to witness in any MMA fight.

Paddy Holohan immediately took Louis Smolka down, achieved leg drag position, and advanced to side control. From there, Smolka began to bridge and shrimp to get his near side knee in. As Holohan worked to get clear of Smolka's knee, Smolka pummeled his near side arm underneath and  immediately shot out the other side into a D'arce choke attempt.

Bridge, shrimp, knee in, near hand through, spin out, attempt D'arce. A lot going on from Smolka.

The near side underhook across the top player's body is an escape most learn early on, in fact almost everyone who has been around grappling for a while knows the same near side underhook spin out into D'arce choke, but it's tough to get going on a responsive opponent, especially a skilled top player like Holohan. Every BJJ player who has fallen in love with this dynamic escape has also found himself on the bad end of the bread cutter choke as a result of attempting this escape and having weight brought down on the arm across the top man's belly.

The bout between Holohan and Smolka was so dynamic that to pick a few sequences from it which stood out is to undersell just how much was going on. Understand that these are just a few of the slick exchanges that caught my eye and that you absolutely should watch the whole fight if slick grappling at a high pace is your sort of thing. If you like striking and knockouts alone, that's absolutely reasonable, but Holohan vs Smolka was never going to stand a chance at entertaining you.

Holohan's fighting off of a throw and throwing in his far hook to attempt a rolling back take was clumsily gorgeous.

When Smolka eventually got on top, Holohan immediately attacked with a heel hook. With his feet hooked behind Smolka's far knee, Holohan had eliminated Smolka's ability to roll with the torque placed on his lower leg. Anyone who follows any sport knows that the word 'torque' is generally not one which should be associated with the knee joint, which is what makes the heel hook such a terrifying spot generally. Smolka's calm in the situation was admirable, and didn't undermine the urgency with which he needed to act as he pushed both hooks into the mat, and back stepped all the way over Holohan to move with the Irishman's attempt to apply the heel hook.

Smolka stood in Holohan's guard for an instant and Holohan instantly grabbed Smolka's left ankle, drove Smolka backwards with a left foot on the hip, and chopped out Smolka's right leg with his own.

Smolka threaded his left foot across and began attacking with an achilles lock, turning to go belly down, eventually coming up with Holohan's heel across himself sadly just a out of position to threaten that 'lateral kneebar' that fifty fight veteran, Ikuhisa Minowa used to welcome the debuting Goran Jettingstad and end his career in the same night. Stay classy, Japanese matchmakers.

Eventually, it was Smolka's willingness to strike when he had top position, where Holohan was constantly looking for submissions which won him the bout. As Holohan took strike after strike (Smolka even put the boot in to the body at one point, a grey area in the rules which always makes many of the fans present furious) the hometown hero began to slow. Trapped underneath the mount, Holohan took too much punishment and gave up his back, allowing Smolka to sink in the choke.

The crowd changed its mood and booed the replay. They began booing Smolka in his post fight interview, until Dan Hardy was able to turn the crowd by telling them that they always support fighters who give it their all. At which point the crowd decided that they actually did. It was emotional judo with the masses by Hardy. Paddy Holohan's post-fight interview was moving and funny though, and the support of the home crowd saw the night end on a poignant note.

Elsewhere on the card Neil Seery put on a decent show with a guillotine finish. Seery will forever remain in my heart as the man who was pulled out of semi-retirement to get steam-rolled by Brad Pickett at short notice and instead slapped him around in his own back garden for three exciting rounds. Against Jon Delos Rayes, Seery looked like his usual self. A meat and potatoes banger on the feet with moments of surprising slickness that catch spectators off guard as readily as they do his opponents, Seery visibly upset Rayes early on with the overhand.

Rayes complained repeatedly that Seery was catching him over the back of the head and in fact the referee warned Seery for it in the first round. This was happening because Seery was crossing each of Rayes' jabs, and Rayes was turning his head with his body, to expose the back of his noggin to blows. As the fight progressed, Rayes began to duck down deeper every time he jabbed, taking his eyes off of Seery and exposing the back of his head further. I have always been of the opinion that if you are giving your opponent rabbit punches like this, you do not have much ground to complain when you do get hit in the back of the head.

Not much else of note happened on the card, but there was a flagrant and fight changing foul which went unpunished. One minute into the second round, Bubba Bush attempted to take Garreth McClellan down along the fence. McClellan reached out, latched onto the cage, and dragged himself into mount. McCellan spent the rest of the round on top of Bush, landing hard blows.

If the referee didn't see it, fair enough. But the referee warned McClellan about it after he landed which is flat out ludicrous. If a fence grab affects the course of a fight significantly—denying a takedown, landing a fighter in top position, helping him up from the floor—the fight must be stopped and a point must be taken away. A warning and allowing the fight to continue does nothing but let a cheater get off scot-free. A warning combined with a stand up often only serves to get the cheating fighter out of a grappling exchange he didn't want or reset the game to before he was caught off guard by a takedown attempt that he couldn't otherwise defend.

The real performance of the weekend came out of Rafael Carvalho on Friday night's Bellator card. Brandon Halsey held Carvalho down for a whole round, desperately struggling to stop any attempt at a stand up, and eventually catching Carvalho in a tight head and arm choke. Carvalho survived, and in the second round fended off the takedowns so that Halsey was forced to stall in the clinch. When the two broke for a moment he threw out a front snap kick with the ball of the foot (more on that in the upcoming Ringcraft episode), and Halsey fell, fetal, to the mat.

It was an excellent performance for a guy who no one ever expected much from. Certainly after seeing Carvalho hold off and tire out Halsey, I have high hopes for his future in Bellator's musical chairs style middleweight division.

Paddy Holohan Started from the Bottom