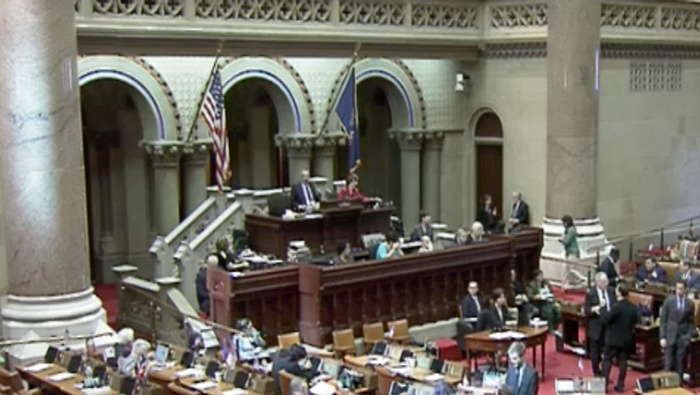 It’s finally happened: Nearly 20 years after the state of New York banned mixed martial arts, the State Assembly voted today to approve a bill legalizing the sport, joining the State Senate and Governor Andrew Cuomo and the other 49 states in the union in the 21st century.

After three hours of heated debate the Assembly voted 113-25 in favor of the bill, which had previously been approved by the Senate. The MMA bill now goes to Cuomo’s desk, and seeing as how the governor has already expressed his support for the bill, and even included the regulation of MMA in his proposed 2016 budget, his signature seems like a foregone conclusion. Under state guidelines, the MMA law will go into effect 120 days after Governor Cuomo signs the bill.

The vote ends a whirlwind of a week for MMA in New York, starting last Tuesday when the leadership of the Democratic conference in the Assembly announced that they would be bringing the Senate MMA bill to the various committees of the Assembly in the hopes of then pushing it to the floor of the full Assembly for a vote this week. This morning the bill went before the Tourism, Parks, Arts and Sports Development Committee, where it passed on a vote of 15-5. From that point on it was as if a dam had broken and a great torrent had been unleashed on Albany. Within an hour the Codes Committee had followed suit, passing the measure 16-5. At about 2:30pm the Ways and Means Committee was summoned from the Assembly floor to discuss the bill and they quickly voted in favor of it as well. Things were stirring. At 3:10pm the Rules Committee (the last hurdle before the last hurdle) moved from the Assembly floor into the Speaker’s Conference Room to debate the bill. You could feel things moving closer, a rumbling of futurity. Barely 10 minutes after they’d left the Rules Committee was back in Assembly chambers and the pro-MMA bill had officially been entered into the day’s agenda. The whole thing started to take on the care of inevitability, destiny even. For the first time ever, a pro-MMA bill had made it to the floor of the New York Assembly.

Not that things ended there, of course. Inevitability is a great thing but democracy is even better, and before MMA could at last become a reality in New York the anti-MMA forces were going to have their say, no matter how depressingly predictable or bizarre. 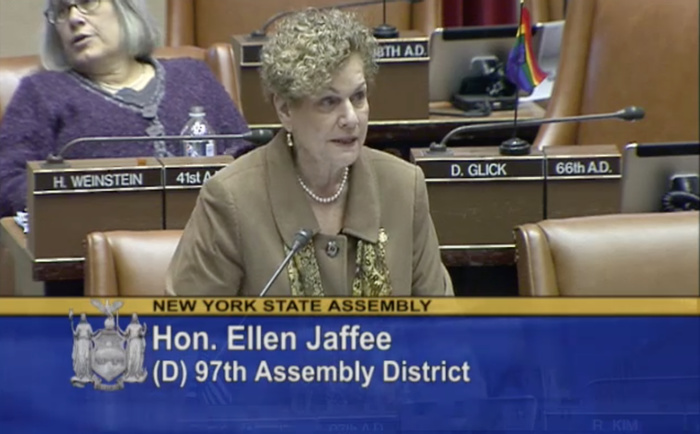 First to speak was Ellen Jaffee, a Democratic representative from Rockland County. Jaffee said she “strongly opposed” lifting the ban and “essentially sanctioning violence.” She called MMA a “spectacle of violence” and “barbaric entertainment masquerading as a sport.” And while I disagreed with everything the assemblywoman said, as a writer I have to concede my respect for the way she said it. Citing the “studies” linking MMA to domestic violence, Jaffee said the sport “harms women victimized by the glorification of distorted masculinity.”

“Distorted masculinity” is a bit of poetry, Miss Jaffee. 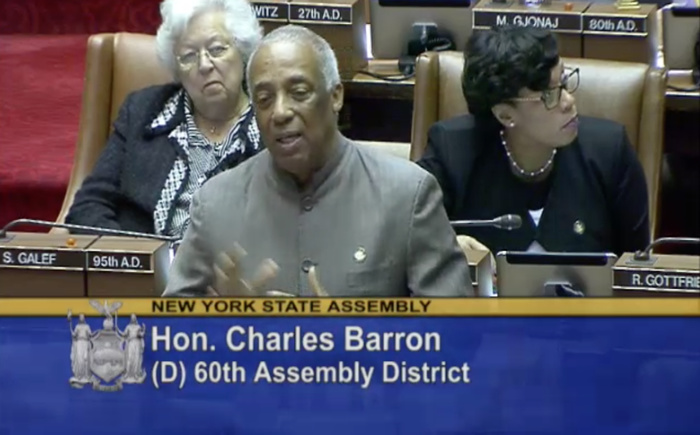 Then there was Charles Barron, from the 60th Assembly District, who somehow managed to combine an anecdote about watching Emile Griffith beat Benny Paret to death in a boxing match in 1962 and his disdain for MMA violence in a single opening statement. He also managed to equate mixed martial artists choosing to compete as athletes with African-American slaves being forced to fight in cages on plantations and rear-naked chokes with the chokehold that New York City police officers used to kill Eric Garner.

“[MMA] goes too far for your entertainment or your tax dollars,” Barron said. “This is too barbaric and it should remain banned.”

And the beat went on. 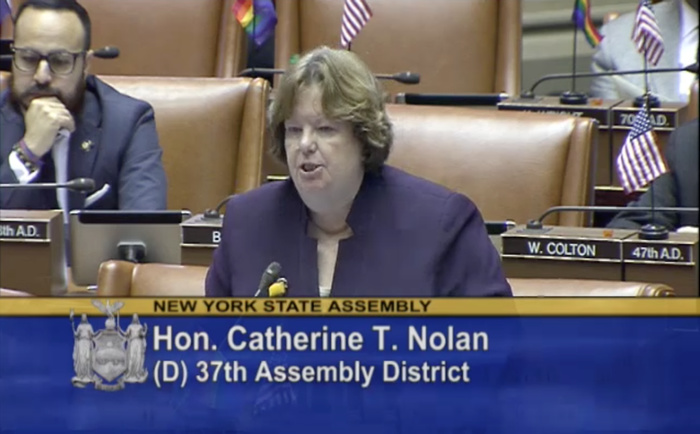 Catherin T. Nolan, from the 37th district, said MMA fights are no tourism draw, no matter what all the economic studies tell us. Tourism is about Niagara Falls, she said, not cage-fights. Deborah Glick said she worries about kids growing up wanting be fighters and starting practice “fight clubs” in schoolyards the same way other kids who dream of the NBA might “shoot hoops” after school. And Republican Angela Wozniak wanted to know why there were no regulations in the bill banning sex offenders from working with kids in MMA gyms. Such offenders, she said, could open a gym and perform what she called “maneuvers” on kids on the mat. Nothing in the bill, she said, would stop them from doing so.

But in the end, all the opposition to legalizing MMA in New York couldn’t hold back the tide of history. At 6:35, approximately three hours after debate began, and nearly 20 years after MMA was banned from the state in a flurry of late-90s handwringing and paranoia, rationality and democracy finally had their day in Albany. At long last, New York had joined the rest of the civilized world.