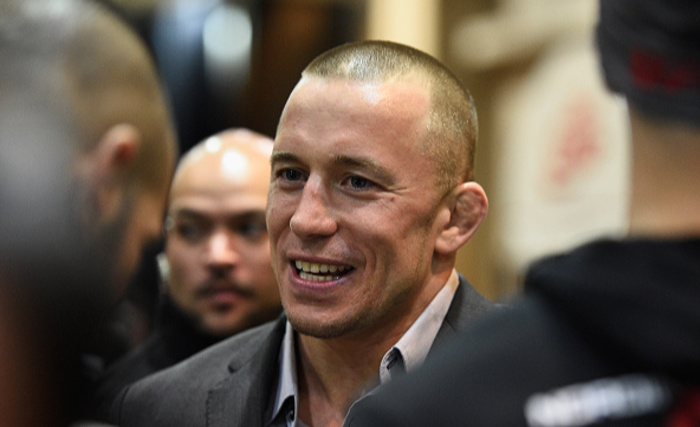 When former welterweight champion Georges St-Pierre walked away from mixed martial arts in 2013, he might as well have tumbled into a crevasse like Unfrozen Caveman Lawyer after a long dormancy, he's reentering a world vastly more complicated than the one he left, and it involves attorneys.

On Monday, St-Pierre appeared on The MMA Hour with Ariel Helwani to announce that he was a free agent. It was jarring news, considering that the Canadian publicly pined to return the UFC as soon as December's UFC 206 in Toronto, Ontario—the 35-year-old even submitted to USADA's four-month-long random drug testing protocols long enough in advance to make the date. The news became all the more jarring hours later when his UFC employers issued a statement to the contrary: "Georges St-Pierre remains under an existing agreement with Zuffa, LLC as his MMA promoter. Zuffa intends to honor its agreement with St-Pierre and reserves its rights under the law to have St-Pierre do the same."

So yeah, this might take a while to sort out.

St-Pierre's future is something of a bellwether for the rest of the UFC's fighting class because, in almost every aspect, he's reached the pinnacle of MMA. He's a two-time welterweight champion who went undefeated for more than five years, a martial artist who often won by spent 25 minutes teaching—the hard way—the best competition available how much better he was in every facet. He's also a squeaky-clean and well-groomed celebrity who's cultivated blue-chip sponsors, sold millions of pay-per-views, and filled arenas. In 2011, he set a longstanding attendance record, drawing an audience of 55,000 for his UFC 129 title defense against Jake Shields.

That same year, St-Pierre signed his current contract, a document that might as well have been written with a quill pen on parchment given how dramatically the UFC has changed since. The change most relevant to St-Pierre is the UFC's partnership with Reebok: fighters relinquished their ability to adorn fight-week gear with outside endorsements for a few thousand bucks in guaranteed cash and mostly blank wardrobe with misspelled names. Meanwhile, St-Pierre had sponsors like Gatorade and Under Armour on his shorts when he exited the UFC three years ago. Those arrangements earned him millions of dollars that he'd either have to forgo or, more likely, that the UFC would have to find in order to get him to return to the post-Reebok Octagon.

To hear St-Pierre tell it, he'd made steady progress on a new gap-bridging contract with former UFC exec Lorenzo Fertitta before WME-IMG bought the UFC for $4 billion this past summer. The new owners annulled St-Pierre's deal-in-progress. Over and over, UFC president Dana White said Georges St-Pierre wasn't truly interested in fighting again—the kind of goading that might work on getting others to settle for less. Then St-Pierre paid a visit to UFC Tonight in August. "I'm a smart guy," he said." I'm not the kind of guy you're going to say that and, 'Okay I'm going to sign right here, I'm going to fight for peanuts.' No, I'm a smart person. It doesn't work, these things on me."

The negotiations dragged on further, and St-Pierre hired James Quinn—a lawyer with a history of representing players' associations in the NBA, NFL, and other household-name sports leagues—to impose a 10-day deadline for a bout agreement with a prospective opponent, a clause reportedly written into St-Pierre's contract. The UFC offered former welterweight champ Robbie Lawler (who pulled out of a bout at UFC 205) in maybe-less-than-official terms at the last minute, so Quinn and company terminated St-Pierre's contract.

This is the kind of labor struggle that usually takes care of itself in combative sports. Fighters have to fight before they get too old, so they cave: BJ Penn and Randy Couture, both former champions who walked away, both came back on the UFC's terms. And while fighters are now more vocal than ever about issues of pay and sponsorships and the push for a fighters' association or union is as loud as it's ever been, most of the UFC's underclass stays silent and fights for a pittance. "Most fighters in the UFC, they are starving," St-Pierre told Helwani. "And for UFC, it's very easy when you keep a lot of your staff starving, they are easier to control."

But these are uncertain times, and there are real questions about how much St-Pierre—once upon a linchpin of the UFC's entrée into Canada—is worth to his new bosses. Earlier this week, the UFC laid off an estimated 80 percent of its employees in its Toronto office—the biggest victim, percentage-wise, of a company-wide purging. In August, the UFC let Rory MacDonald—St-Pierre's protégé and the Canadian heir apparent to his welterweight legacy—walk away to Bellator. UFC 206 in Toronto, anchored only by a light heavyweight title fight between Daniel Cormier and Anthony Johnson, looks like an afterthought between the Conor McGregor and Ronda Rousey fights closing out 2016. And St-Pierre told Helwani that the UFC said it'd have to "take a huge financial risk" to reintroduce him to fans.

That last bit is really stupid, if true. St-Pierre is an uber-athlete and professionally bland personality who, were it not for being in the employ of a talent agency that's a rival to WME-IMG, would benefit greatly from his new overlords' cross-media connections. He's already graced the cover of Men's Health and had a bit-part acting career. Imagine what he'd do on Conan.

Then there's the specter of litigation. "I don't think the contract—that formal contract—is likely to stand up," Quinn told MMA Fighting. "Not in today's world. It's a pretty nice form of slavery." Slavery is hyperbole, but it's true that UFC contracts favor the promotion over the fighter at almost every turn, from likeness rights to independent contractor status. A courtroom battle that involves publicly picking apart standard, onerous provisions of a fighter contract would have ramifications that trickle down the roster. And at the same time that the new owners seek a return on their $4 billion investment, St-Pierre's team seems amenable to returning him to the UFC fold while he has some good years left—all without a judge or court fees. "I suppose they could take legal steps against (the contract termination) or they could offer a new contract," Quinn told ESPN. "They have a variety of options on their side."

My prediction: the UFC gives Georges St-Pierre the money he wants, quietly and begrudgingly and with a little more posturing. If not—and if the promotion doesn’t simply let him walk away to Bellator or elsewhere—St-Pierre will come to the courtroom with as much leverage as a prizefighter can have. He has the resources, and his livelihood is no longer tied to fighting: it's more pastime than salvation, so he can afford to be dispassionate and demanding. St-Pierre's last seven fights went the full five rounds. He can bear a judge's decision, even if he'd prefer a fast finish.